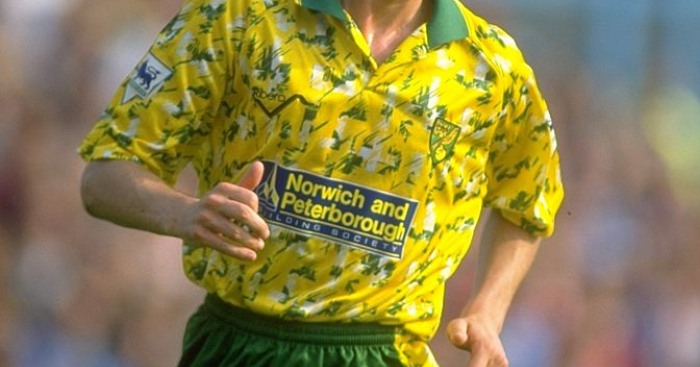 Former Norwich youngster Jamie Mitchell has opened up on the brutal reality of the dressing room in the 1990s as he says he was made to sing NAKED in front of the Canaries coaching staff.

Mitchell was one of the Britain’s hottest young talents when Spurs, Rangers and Norwich were chasing his signature in the late 80s.

He chose Carrow Road, where he would work his way through the youth ranks only to be let go in 1996 at the age of 19, with the reason given that he was too small.

The Scot would play under the disgraced Kit Carson, who took his own life on the morning he was due to stand trial for historic abuse.

Speaking on the Talkin Fitbaw podcast, Jamie reveals how tough it was to survive as a young player:

“The Norwich dressing room was full of top players and as a YTS I’m going in there and you’re getting verbally abused.

“I had to sing naked at Christmas-time in front of all the professional staff.

“If you think back and the things that are going on nowadays, we had to sing Rudolph the Red-Nosed Reindeer, naked on a treatment table in the dressing room.

“If you didn’t do it you’d get absolutely done in, you’d get made to run round the training pitch in the snow with nothing on.

“You couldn’t not do it because the management would’ve looked upon you in a different light.”

Really good interview with @talkin_fitbaw. Brought back some good memories and some not so good. Life as a young footballer in the 90s was brutal at times. Certainly was character building to say the least! https://t.co/QLMcd4MXXg

“They would think, ‘He’s not got the character, he doesn’t want it enough or he’s not willing to sacrifice’.

“These are the things you have to do. Some of the things I had to do was unbelievable, all to just demonstrate I had the character to become a professional.

“To survive in that environment you need to become, or be a certain character. I was always quite a quiet boy, fairly shy guy and I had to adapt. I’m not a naturally confident, outgoing person. I had to make myself become like that.

“To survive in those dressing rooms you had to adapt and be like that. I had to act every day and when I didn’t have to do that it’s like a total mindset change.

“You couldn’t dream of doing that in a dressing room nowadays or treat apprentices the way I was treated.

“In the 90s that is what the dressing room was like. If you didn’t adapt to it you’d get annihilated from your teammates and management.

“You’d be taken into the boot room and done in. You’d get humiliated and it was hard for me because at 15, 16 I was a late developer. I hadn’t fully developed as a guy yet, my voice was still breaking and I was still a young boy.

“Having to go into men’s changing rooms where everybody else is a man and developing into a man and I wasn’t and I had to get through that. Having to be in a dressing room and doing all that in front of everybody, it’s character building to say the least.

“There could be lots of lawsuits drawn up nowadays. There are probably a lot of boys with similar stories.

“The culture back in that day was brutal, absolutely brutal.

“In a weird way it did help me because there’s nothing more embarrassing and worse than that period of time when I had to do that. In my head I thought ‘nothing can be as bad’.

“All these things have happened to me which might have put a lot of guys down but I think everything that happened through 12 to 19 helped me prepare for what was to come in later years.

“I’m not saying standing on a treatment table naked singing Rudolph the Red-Nosed Reindeer helped me but the overall culture, being able to deal with that and do that helped me.”