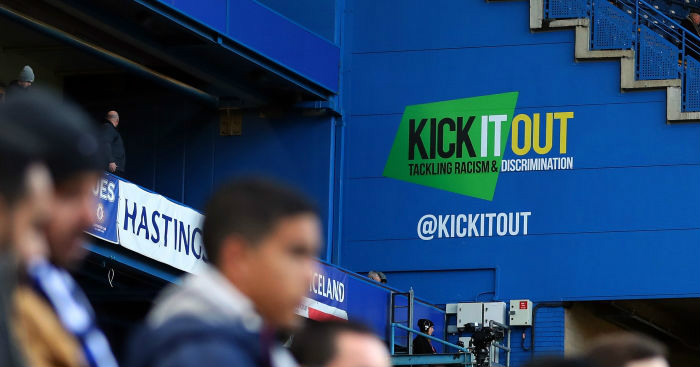 It is clear that while people may feel emboldened by the environment, racism is not something people pick up on their way through the turnstiles and leave behind on the stands with the burger wrappers and empty plastic cups. Such hate does not readily come out of the mouth unless it is already held in the heart, and to say you ‘got carried away’ is no defence. Even in anger you should know where the line is.

Without wishing to put words in his mouth, this is presumably what John Barnes means when he said: “It can’t be tolerated but we’ve got it the wrong way around. You can’t get rid of it in football before you get rid of it in society. Try to figure out a way to stop people wanting to boo because someone is black. Let’s look at what’s going on in society and try to tackle it.”

And that, of course, is correct. We do need to work out what has gone wrong that in 2019 there are still people that think any of this is acceptable. We in the media should be among the first people anyone points the finger at: while this site tries to avoid and indeed take the strongest possible stand against these things, we are, as a industry, much too sensationalist, too dependent on outrage to get clicks, and too predominantly white.

The latest incidents may have taken place in Ukraine and Montenegro, but there have been more than enough incidents in England over the past couple of years to shake us out of any complacency that may have crept over us. Racism, homophobia, sexism and other forms of discrimination may not be voiced in quite such universal chorus as they were in bygone decades, but they are still widespread enough that some deep self-reflection is still desperately needed.

While Barnes is right that this hateful behaviour can never be properly exorcised from football without having first been banished from society, it hopefully goes without saying that football should still strive to make clear that it is not welcome in stadiums, on touchlines, or on the pitch.

In principle, this approach should mean football can become a leading light in the fight against discrimination. Football grounds are strange places, where certain societal rules are temporarily suspended; there are few other places where it’s totally acceptable to pull off your shirt and start singing at full voice, or shouting at grown men that they’re alternately disgraceful and incredible.

The idea is that if it were made crystal clear that racism, homophobia, sexism, antisemitism, ableism, transphobia and so on were unacceptable even here, it would send a strong message that it doesn’t fly in the real world, either.

And when specific individuals can be identified as the offending parties in specific incidents, the course of action is clear: you issue a stadium ban and make clear such behaviour will not be tolerated. But the question is: what are the authorities supposed to do when it becomes a pattern of behaviour, either by spreading to greater numbers of the crowd or by happening repeatedly?

Fines, being made to play behind closed doors, and points deductions are good ways to ensure clubs and national FAs are doing everything they can and are incentivised – beyond mere common decency – to make every effort to stamp that crap out.

But frankly, for all those measures are designed to produce sufficient social pressure from within a fanbase to make people think twice, it is difficult to see how they can succeed against the sheer weight of wider societal influences.

We can pat ourselves on the back for our rainbow laces all we like, but certain idiot parents will still try to stop their kids from hearing the words ‘oh, by the way, some people aren’t heterosexual’. We can talk about how women’s football is going from strength to strength, but it won’t stop the same old retrograde neanderthals from thinking men are inherently better. We can laud footballers for standing against racism, but it won’t put an end to centuries of subjugation and discrimination.

But it’s incredibly important not to lose sight of the fact that although none of those things alone will solve all the world’s ills, they all gradually add up to play some small part in a larger whole – in exactly the same (yet diametrically opposite) way that one horrible dog-whistle tabloid article may not lead anyone to go out and commit a racist act, but years of them can aggregate and fester until such hatred becomes entrenched and commonplace. Make no mistake, that is what those of us who want to see a fairer, less hateful world are up against.

When the war against hate seems futile and it feels like we’re just going backwards regardless, just try to keep sight of that. Try to think about how you can do your part to actively stand up and use your voice to make clear that you do not welcome discriminatory behaviour. Find out if your club or their supporters’ trust or other fan groups are running organised initiatives that help the cause; and if not, ask them why not, and what you can do to help.  Get behind Kick It Out, and the other organisations like them who want to make matchday more inclusive. And, where it is safe to do so, question your fellow fan when they start to come out with questionable or hateful sentiments.

discrimination kick it out racism