Once you start reading football autobiographies, you can read nothing else. 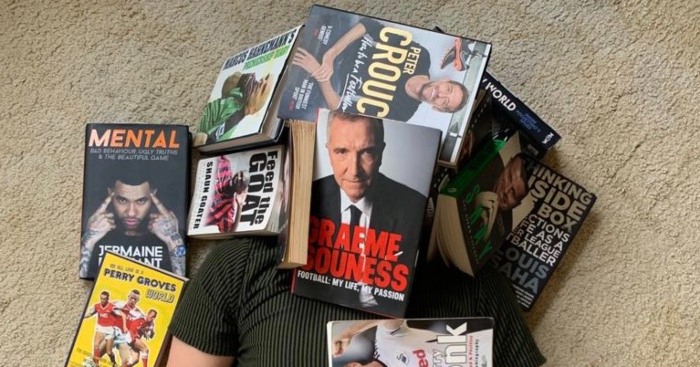 2020 has been a bit of a write-off for everyone. I’d love to say I used this year to learn a skill, or to write my magnum opus. Instead, I spent the majority of the year reading books written by Louis Saha (and countless other noughties footballers).

Why? Well, until September 2019 I’d never read a footballer’s autobiography. As much as I love football, I never had any great urge. That is until the day I stumbled across Darren Huckerby’s story.

We all know about Roy Keane’s book, or Zlatan’s. But I’m guessing less have read ‘Hucks: Through Adversity to Great Heights’. And it felt like a personal affront to Darren if I didn’t read it.

Until I found ‘Hucks’ I didn’t realise just how many players – cult heroes and journeymen alike – had written a book. Paul Sturrock’s written two.

I had to read them all. Thus our podcast The Football Book Club was born. A book club, but for people who like their reading less Jane Austen and more Charlie Austin.

A year and countless autobiographies later, I’ve learned a lot. So here are some of the things that have gone through my mind on my journey through the weird and wonderful world of obscure footballers’ autobiographies.

What am I doing with my life?

This is a given, let’s move on.

You genuinely cannot judge a book by its cover

Footballers’ autobiography titles are very funny, as I wrote about here. So when you see a book called ‘Taking Le Tiss’ or Lee McCulloch’s beautifully named ‘Simp-Lee The Best’, you kind of know what you’re getting yourself into, right?

Well, for the most part that’s true. But sometimes they can surprise you.

For instance, I expected Louis Saha’s‘ Thinking Inside The Box’ to be a light read with stories about Old Trafford and Thomas Gravesen. Instead, Louis uses his book to talk about…

– Gargamel the evil wizard from The Smurfs.

He also writes an essay on the 2008 Financial Crisis. From memory, he doesn’t mention a Fulham teammate once.

It’s The Football Book Club Episode 3, in which I get too angry at Louis Saha spending three pages writing about a completely theoretical goal in an entirely fictional cup final!

Also, motorbikes, metaphors and monetary policy with Dominique Strauss-Kahn! Give it a listen! https://t.co/okkK95llTh

When a high-profile autobiography is released, the tabloids run a story either along the lines of ‘THE TRUTH BEHIND X’ (usually something involving Roy Keane) or about whoever the author decides to slag off in the book (again, Roy Keane).

As far as I can tell, footballers basically wake up, train, play FIFA, then go to bed about seven. That’s not me knocking them – hey, we all need a routine – but this probably explains why so many footballers basically have about two good stories from their career and the rest is about the time they watched Nigel Worthington kick a skip.

Kevin Phillips is perhaps the master of the mundane. In his book ‘Strikingly Different’, he lives in a hotel for a bit (very Alan Partridge), survives off cheese toasties (even more Partridge) and then describes – in painstaking detail – the inside of the Sunderland match-day coach. It’s a masterpiece.

There haven’t been many times I’ve considered giving up reading. But when I found out Andy Gray’s 1986 book is called ‘Shades of Gray’ and all I could picture was naked Andy tied to a bed with a silk tie, I’ll be honest, it was touch and go. However, I ploughed through.

Also in that book, Andy, bizarrely, spends a pre-season at Villa living with Black Sabbath. Imagine Tyrone Mings telling Dean Smith he was off to spend July with Megadeth? Madness.

I – possibly wrongly – assumed most football books would be GOALS! SEX! FIGHTING! And, granted, Jermaine Pennant’s absolutely is.

But not as many others have been.

But I still thought there’d be a bit more filth in these books. Instead, Maya Yoshida spends about four pages of his talking about his curtains that never turned up. Phwoar.

Here’s when we helped solve the mystery of Maya Yoshida’s missing curtains pic.twitter.com/JYQVXPAmOg

Football autobiographies can make you cry

The first time this happened, was when I was about 200 pages into Garry Monk’s ‘Loud, Proud and Positive’ (no idea either). I was reading yet another highly-detailed match report about Swansea v Yeovil when I thought ‘maybe this is it? Maybe there is no God?’.

But they can also make you cry for good reasons too.

When we read Jason McAteer’s ‘Blood, Sweat and McAteer’ we thought ‘that’s a great pun – let’s read it’. But behind the title was a really funny book which was truly moving and discussed mental health as well as anyone.

It was a brilliant read which genuinely changed me and I’m not sure if I’ve just gone mad from all these books, but – no hyperbole – Jason McAteer might be the greatest author of our time. Although, in fairness, I’m yet to read either of those Paul Sturrock books.

I’m never going to be able to read ‘normal’ books again am I?

In January someone lent me a book on the ‘New York Times Best Seller list’ – whatever that is. Eight months later, I’m 20 pages in.

In the time it’s taken me to read those 20 pages, I’ve read, amongst others, the NY Times overlooked ‘Lorenzo Amoruso’s LA Confidential’ and two books by Graeme Souness. Two.

My brain has no time for fiction. We can be in space, Narnia, some fairytale kingdom with big elf lads – it doesn’t matter. If Ade Akinbiyi’s not turning up, I’m out.

And, frankly, I wouldn’t want it any other way. I don’t want to read other books anymore. I’ve still got Kevin Kilbane’s ‘Killa’ and ‘The Life And Times of Barry Ferguson’ to read.

So until we’ve read every single football autobiography, or I lose my mind, whichever comes first, we’ll keep going.

And, if anyone wants 40 or so football autobiographies gathering dust in my cupboard please, hit me up.

The Football Book Club Series 2 is now available on all podcast platforms. We release a new episode every Monday with books for this series including Jerzy Dudek’s ‘A Big Pole In Our Goal’ and Grant Holt’s ‘A Real Football Life’. We can also be found on Twitter, Instagram and Facebook.