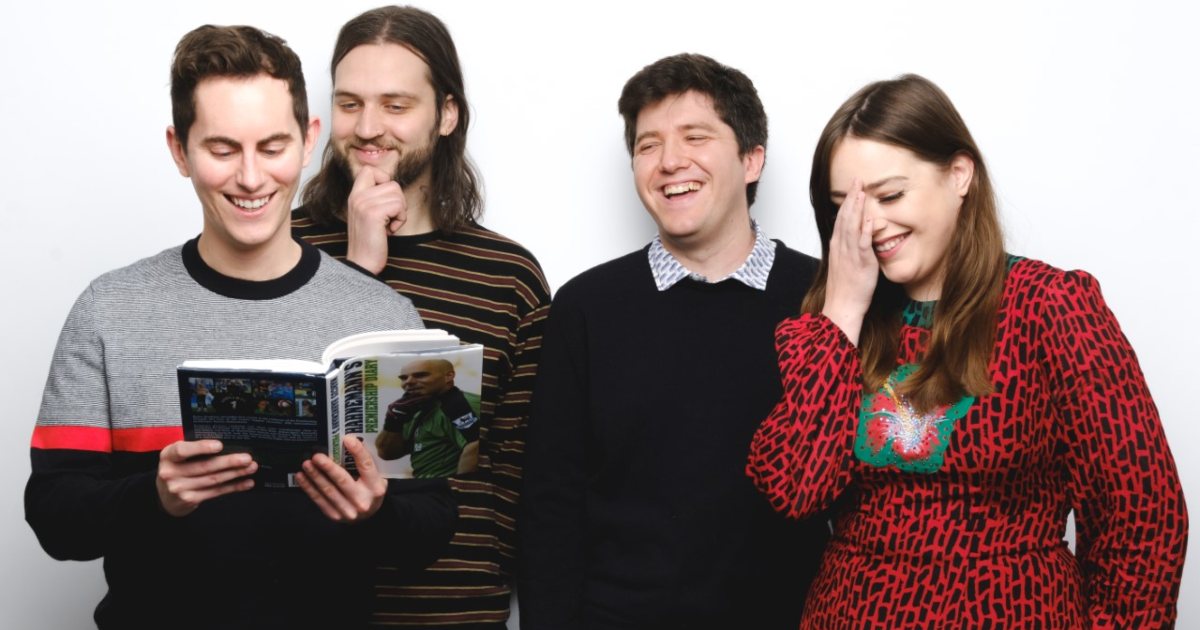 Like your books a little less Dickens and a little more Dickov? The critically-acclaimed Football Book Club podcast are the only book club that reads nothing but football autobiographies.

And with the new series starting on February 22, it’s time to crown their very best, very worst and very weirdest reads to date.

We all enjoy a footballer’s autobiography. But, beyond the football world, these books never get the attention they deserve. When was the last time Michael Owen won a Booker Prize? And how Matt Le Tissier’s ‘Taking Le Tiss’ was overlooked for the Noble Prize in Literature in 2010, frankly we’ll never know.

But we’re here to change all that.

Help spread the word by dropping this tweet a RT 📚 pic.twitter.com/J0g9y1NXfw

Over the past two series, The Football Book Club podcast have made it our duty to work our way through every footballer’s autobiography that has ever existed, giving even the most obscure books the attention they deserve. Classics such as Barry Ferguson’s ‘The Life and Times of Barry Ferguson’ and former Reading keeper Marcus Hahnemann’s ‘Premier League Diary’.

Now, ahead of the release of our third series on Monday February 22, we’re going back through all the books we’ve read so far to crown the winners of our inaugural Football Book Club Alternative Awards ceremony. Celebrating the best, the worst and weirdest moments in football autobiography history.

So pop on your tux, roll out the red carpet and let the ceremony begin…

Best Cover
We’ve had some great contenders for this since our journey began. But nothing can compare to the cover of former Rangers and Blackburn hero Lorenzo Amoruso’s ‘LA Confidential’.

Sure, it’s no surprise to see a footballer pose for their book. But there’s poses and there’s Lorenzo Amoruso in a tank top, staring through you, looking like Wolf out of Gladiators’s brother, stretched out across every millimetre of a book the size of a GCSE history textbook. There is no escape.

Most Forced Pun in a Title
If you’re going to write a footballer’s autobiography, you have two choices. One, call it ‘How Not To Be A Footballer’ like everyone else. Or two, force your name any which way into a pun.

See Shay Given’s ‘Any Given Saturday’, Frank Lampard’s ‘Totally Frank’ and Jason McAteer’s ‘Blood, Sweat and McAteer’. The last of which doesn’t really work, but it’s a good book so we’ll let Jason off.

However, for sheer lack of effort, sheer audacity, sheer ‘yep, it’s been thirty seconds, that’ll do’, the prize can only go to former Wigan striker Lee McCulloch for naming his book… ‘Simp-Lee The Best’.

However, as bad as that title is, at least he didn’t call it this…

Worst Title
Garry Monk’s ‘Loud, Proud and Positive’. No, we have no idea why he called it that either.

However, it did. And, although Andy’s book is relatively restrained, he doesn’t help himself with persistent, unfortunate spelling mistakes like ‘My mate left, and only when those two had gone did I anally come to my senses’.

The Elastoplast Award for Most Non-Football Related Injuries
Within the first two or three chapters of his book (the brilliantly titled ‘A Big Pole In Our Goal’), a young Jerzy Dudek sustains more injuries than every book we’ve read so far combined. None of which are on the football pitch.

– Almost drowning while fishing for cuttlefish by a mine.

– Headbutting a window on a train.

– Getting caught by the Russian secret police for stealing tomatoes.

– And falling out of a pram while he’s being chased by a goose.

As Jerzy himself says ‘That’s just what happens in Poland’. That, or a particularly bleak episode of Miranda.

Most Noughties Celebrities offended
An easy win here for Jermaine Pennant and his 2018 book ‘Mental’.

What Jermaine’s book lacks in subtlety or narrative cohesiveness, it more than makes up for in sheer number of well-known names slagged off. As if it’s not bad enough revealing his dog killed Hollyoaks star Jennifer Metcalfe’s cat (truly, the worst moment in football autobiography history), Jermaine then goes on to disrespect not one, not two, but three members of Girls Aloud.

Most Unexpected Fan of Emmerdale
An easy win for former European Golden Shoe winner Kevin Phillips here, who reveals in his book how excited he was when the team coach drove past the set of Emmerdale farm on an away trip.

As far as we’re aware, this is the only time Zak Dingle appears in a footballer’s autobiography although, in fairness, we’re yet to read Andrea Pirlo’s ‘I Think Therefore I Play’.

Most Unexpected Namedrop
Special shout-out here to Garry Monk, who tells an – allegedly real – story of how Rod Stewart called him up on stage, then leaned in to Garry’s ear and whispered ‘how’s your mum?’, before winking. Again, no idea if Rod Stewart actually had sex with Garry’s mum.

But the clear winner here, scooping their second gong of the night, is Andy Gray, who revealed in his book he once lived with heavy metal legends and Villa fans Black Sabbath for a whole pre-season.

A true world’s collide moment, and the long-lost episode of The Osbournes we all dreamed of.

The Football Book Club Best Book (so far…)
And finally, as the ceremony draws to a close, it’s time to reveal our favourite book we’ve read on the show so far.

Honourable mentions to Jason McAteer and Grant Holt, whose ‘A Real Football Life’ is an unsung classic. But the undisputed winner is Paddy Kenny’s recent ‘The Gloves are Off’ which is, at all times, sweary, honest, moving and genuinely funny. PLUS it features Paddy getting his eyebrow bitten off in a curry house. It has everything you could want in a football autobiography.

With S3 coming next Monday, we thought we’d have a look back at some of our favourite moments from the last series.

First up, guest @paddykenny17 and the time he wrestled a plumber under his car…pic.twitter.com/WwGaqxgipP

But can any books surpass them? Find out when Football Book Club returns for Series 3. Coming to all podcast platforms Monday February 22.

This series of Football Book Club sees the club reading classics such as Chris Kamara’s ‘Mr. Unbelievable’, ‘There’s Only One Neal Redfearn’ and the entire Michael Owen literary trilogy. You can subscribe to the podcast on Apple, Spotify and on all other podcast platforms, with a new episode released every Monday. They can also be found on Twitter, Instagram and Facebook.