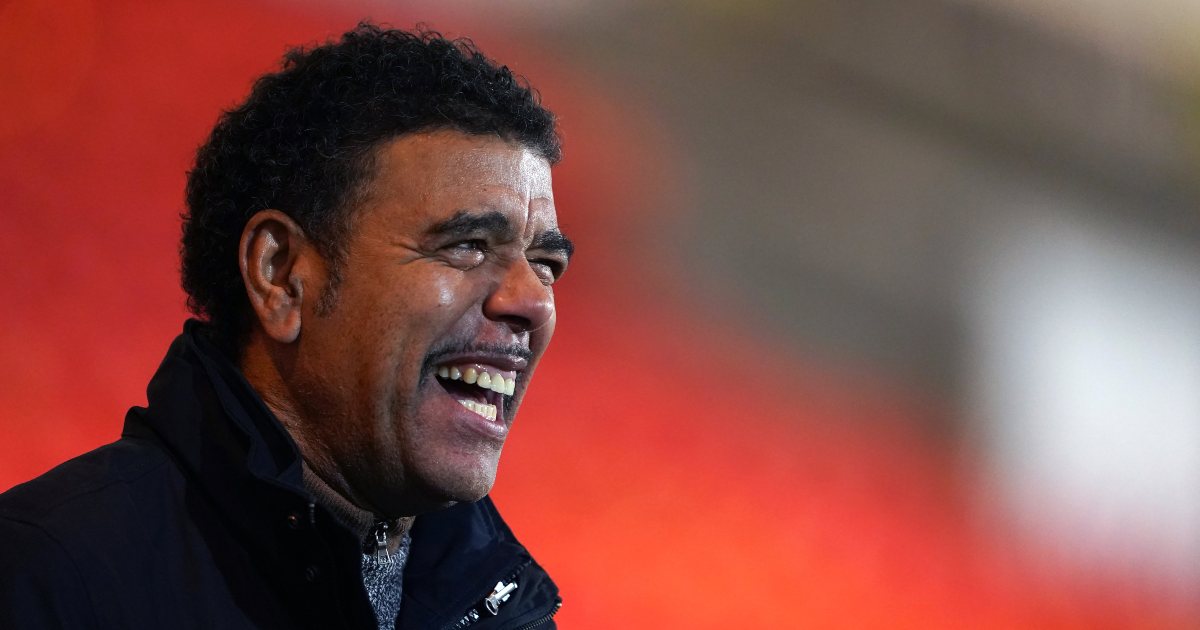 Like your books a little less Dickens, a little more Dickov? The critically-acclaimed Football Book Club podcast are the only book club who read another footballer’s autobiography every week.

Everyone loves Chris Kamara. His goofs. His jolly persona. His ability to turn any television appearance, no matter how fleeting, into unbridled chaos. In fact, the public’s love for Chris Kamara is so great, his book ‘Mr Unbelievable’ became a Sunday Times bestseller in 2011.

A labour of love for a misunderstood broadcaster? Well, not quite. As revealed in an interview with The Big Issue a few years back, Chris hasn’t even read his own book.

“I am not a reader. I know they always say a person who reads books lives 1,000 lives, but someone like me only lives one…I haven’t even bothered reading my own autobiography.”

The good news, however, is we have read it, Kammy.

So, just in case you wanted to know what’s in there, Chris, here are some of the things we learned from reading Chris Kamara’s ‘Mr Unbelievable’.

Do you know anyone who still calls it The YouTube Website?@chris_kammy does and it’s in his autobiography. Listen to our latest podcast NOW where we review “Mr Unbelievable”

The word ‘unbelievable’ is used an obscene amount of times
Anyone who watches Soccer Saturday will know Kammy’s catchphrase, ‘Unbelievable Jeff!’. A great catchphrase that perfectly sums up Chris Kamara’s trademark disbelief when thrown to by Jeff Stelling.

Kammy himself is aware of how important a catchphrase is. At the top of his book, he recalls the all-time classic catchphrases, “Bruce Forsyth used to open The Generation Game with the words ‘nice to see you, to see you nice’” and “Dale Winton was forever saying ‘Bring on the wall!’ during Saturday night-favourite Hole in the Wall”.

That’s right. Not ‘I don’t believe it’. Not ‘To me to you’. But ‘bring on the wall’ from a show that lasted two series and finished in 2009 (Dale Winton left after the first one).

But anyway, ‘unbelievable Jeff’ is a genuinely great catchphrase, so you can understand why the book is called that. However, the word ‘unbelievable’ is used so often – to describe both unbelievable and largely believable moments in his career – that by the end the word loses basically all meaning.

At last count, it appears somewhere between 75 and 80 times. Try writing the word ‘unbelievable’ down 80 times. You’ll lose your mind.
For contrast, he only uses the word ‘goal’ three times*

*this may or may not be true

The all-time great catchphrases, according to Mr Chris Kamara.

Chris Kamara hates mascots
Chris Kamara is a lovely man and nothing in this book changes my opinion on that. The sheer force of dad joke after dad joke sweep you through the book.

In fact it’s hard to think of anything that would wind Chris Kamara up. Anything except mascots that is…

In the book, Chris bizarrely goes on the rampage about Gunnersaurus and co, calling them a “royal pain in the bum”. He then doubles down in a fit of anger, asking “do they really think anyone watching at home finds the weird cross-dressers (yes, he calls mascots cross dressers) the slightest bit funny?”

I don’t know what traumatic incident with a mascot caused Chris Kamara to hate them so much. Was one of his family kidnapped by Harry the Hornet? We may never know.

But as pointed out on the podcast, six foot something, larger-than-life characters making a fool of themselves in front of the pitch is basically Kammy’s job. So maybe he’s just worried they’re after his gig.

The book contains a complete YouTube link which, no matter how many times you press it, sadly doesn’t work on paperback
One thing that took us by surprise about this book is, after about 100 pages of funny, but trivial, Soccer Saturday-isms, the book totally pivots to talk about his playing and managerial career. As well as the struggles of being a black footballer in the ‘70s and ‘80s.

It’s a genuinely fascinating insight into a side of Chris Kamara that a younger audience might not know about. It’s well-written, moving and also told with Chris’s trademark humour.

… It’s also the first book we’ve read yet that contains a whole paragraph telling us how to watch a video on YouTube. Or, as Chris calls it “The YouTube website (www.youtube.com)”.

Just type in “Kamara_McAvennie.avi” we’re told, and you can watch a particularly crunching tackle between him and Frank McAvennie. We’ve read a lot of football autobiographies and this is the first time we’ve seen a walkthrough on how to use YouTube. So, if anything it’s ground-breaking.

Overall, whether Kammy has read it or not, the book is genuinely good fun. It’s funny, it’s deceptively deep and at the end there’s one absolutely bizarre anecdote about how Chris Kamara was offered the chance to be Harrods press secretary by Mohamed Al-Fayed about a decade ago, which sounds like something we dreamt but I’ve gone back and it’s genuinely in there.

And to be fair to Kammy, that genuinely is unbelievable.

For more on the book, including Kammy on jazz, buying an off-licence and running riot in Japan with Jeff Stelling, listen to the full episode now.

CLASSIC FOOTBALL AUTOBIOGRAPHY CHECKLIST
80s hair on the front cover? I don’t think Kammy has ever had a different haircut?
Does he talk about herself in the third person? No, but he does refer to his children as ‘Kammettes’
Does Roy Keane turn up? No.
Did you learn anything meaningful from the book? Yes. Once we got past the 400 anecdotes about Jeff Stelling.

Overall – Four Unbelievables out of Five

To listen to The Football Book Club podcast discuss Chris’s book, you can subscribe to the podcast on Apple, Spotify and on all other podcast platforms, with a new episode released every Monday. They can also be found on Twitter, Instagram and Facebook.