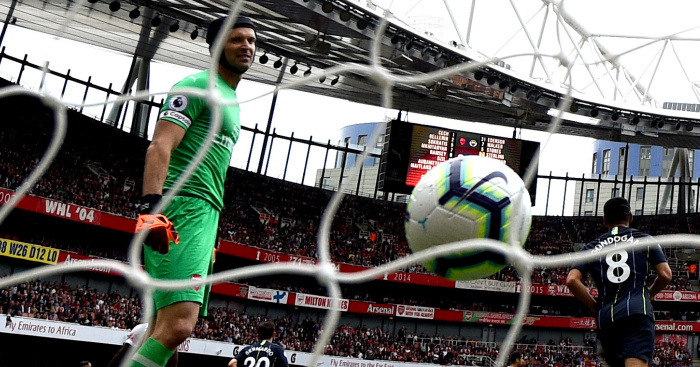 Midway through the first half of Arsenal’s home match against Manchester City on Sunday, Petr Cech made a mistake. Receiving the ball to feet from Matteo Guendouzi, Cech attempted to pass the ball to a teammate but miscued it just wide of his own goal. Disaster avoided – just.

Supporters immediately reacted in the way that they now tend to do. Some idiots in the stadium cheered Cech ironically when he avoided subsequent errors in harmless situations, while on social media came the usual explosion of extremism. Cech should be substituted, dropped or forced to retire, depending on where you looked.

But Arsenal fans were not the only ones to doubt Cech. Bayer Leverkusen’s official English language Twitter account spotted an opportunity for tepid banter that could not be missed, because tepid banter never can. Responding to an Arsenal fan that had tweeted a clip of the mistake, they referenced their former goalkeeper Bernd Leno, sat on the Arsenal bench. As a follow-up, they posted a video of Leno passing out from the back. The insinuation was that Cech is unfit for that purpose.

We know how this works by now, and so do Leverkusen. Within minutes came the news stories containing such buzzwords as ‘troll’ and ‘destroy’, and you can hardly blame outlets for reporting the incident. It may only be the work of a low-paid social media editor with little affiliation to Leverkusen, but this is still a football club mocking the player of another club. The medium and the intent may be entirely throwaway, but that doesn’t matter. This is like offensive jokes: the purveyor does not get to determine the offence caused, the recipient does.

By Monday, Cech had used his own Twitter account to respond to Leverkusen, calling them out for such an unnecessary dig and prompting another wave of news stories. This time the headlines spoke of ‘hitting back’ and ‘continued spat’. The language of digital media really does demand its own dictionary.

Cech may well regret saying anything at all, even if he was perfectly entitled to defend his own honour. Yesterday’s tweets are today’s digital fish and chip paper. Such is the instant gratification of social media that responding to something is the only way to keep it relevant. Wilful ignorance is the easiest route to bliss.

But why should Cech have ignored it? It is easy for a supporter or social media user to accuse him – or me – of a sense of humour bypass, but it really isn’t very funny. Tongue-in-cheek or otherwise, this is the official account of a major European football club telling another to drop their goalkeeper. Cech has never used his social media account to do the same or remotely similar.

By creating a news story out of the reaction – and Leverkusen cannot reasonably claim naivety, though they did – the error itself also stayed in focus far longer than it demanded. If Cech does drop to the bench at the age of 36, that may well be the beginning of the end for his career. How do you think making the error, hearing the jeers and reading the tweets made him feel? The last thing Cech needs is a football club mocking him in the name of back-slapping banter and numbers.

In case you all were wondering how to play out of the back… pic.twitter.com/LZkxznsGPs

This is nothing new. There is a new wave of football clubs inserting personalities into their social media accounts, and the trend is particularly prominent in Germany. The accounts – or those running them, even though they are one and the same – interact with each other, often teasing to emphasise rivalries. If you mute the winking emoji on Twitter, you can avoid 30% of the intra-Bundesliga interaction.

There is nothing pure or impromptu about any of this conversation. The majority of football club social media posts are rhetorical questions asked to farm easy engagement (‘Who’s planning to come see us in the BayArena this season?!’ or ‘So… how was your Monday?’) or tired social media memes (‘That face you make when it’s finally time to return to competitive play this week…’) all interlaced with pictures of the players in their kit splashed with sponsors logos.

More engagement, more interactions and more followers equals more value to sponsors and thus a stronger bargaining position in negotiations. The two initial tweets about Cech generated over 5,500 retweets and 13,000 likes. If Cech responding angrily might make the exercise seem like a faux-pas, the opposite is true because Leverkusen will have delighted in the headlines. When the entire aim is to go viral, who cares about corporate social responsibility? There’s no such thing as bad publicity.

In October 2017, Bayer Leverkusen announced that it had doubled it online following to 3.5 million across 17 channels. Marketing director Jochen Rotthaus spoke of the ultimate aim of the club’s social media presence: “Obviously, it is part of the strategy to monetize our popularity later on.”

Read that quote again and weep. Social media was sold as a means of those in high-profile positions (including football clubs) connecting with their supporters or customers. Football fans are regularly surveyed on the issue and come up with the same three demands: Behind-the-scenes content, efficient communication on issues and, yes, some fun. But manufactured banter only leaves an unpleasant taste, particularly when it is so unashamedly done as a means of making even more money.

There are honourable exceptions. BBC journalist Mike Henson recently wrote an excellent piece on the success of Bristol City and Roma at using social media in an inventive and fresh way, and both have earned industry praise for their strategies. But even they may have to learn where the line is. Bristol City made a joke about their left-back Joe Bryan leaving the club that left many supporters unhappy.

Cech is right. Football clubs do not exist in glorious isolation, free from responsibility. Just because something might help the social media numbers does not mean it helps the brand. We do not need our football clubs – or their Twitter accounts – to try and be our mates or to take the piss out of rival players. Looking after the supporters will do – just ask Barnsley.

But this incident is indicative of the industry as a whole, where staff plan out the next way in which they can appear off-the-cuff. Its forced nature inevitably saps away the humour and replaces it with transparent corporate-themed dirge. This is Sunday Sport behaviour from a broadsheet organisation. You’re a football club, a social institution. Start acting like it.