Home Johnny Nic Will you join thousands at the football ever again? 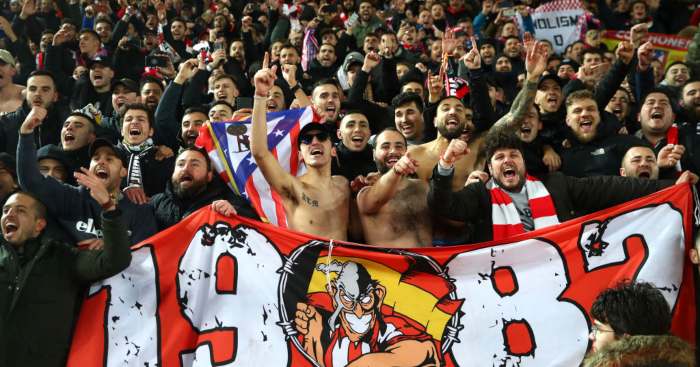 If football was reinstated this week – with everything as it is – would you go? When I asked this on Twitter yesterday, the vast majority said no. Most of us fear it would be too dangerous. It’s not just being in the ground; it is the buses and trains you take to get there. So the lockdown stays locked down.

But here’s the thing. I can’t imagine ever feeling safe in a mass gathering again. I really can’t. And we’re only a month into this thing. It’s changed everything I feel about being in public and I can’t be the only one whose perceptions have so shifted.

In another Twitter poll I ran yesterday only 15% said they’d be prepared to go back to games regardless of anything. Over 80% will only go back when there is mass vaccination or zero/low infection and death rates.

Regardless of government advice, for you to feel safe enough to go to a football match again, what will have to happen?

Not only might that be a year or more away, there may never be a low or zero infection rate.

There is a growing restlessness about the lockdown and it seems set to be eased, at least partially, in coming weeks, if only to try and head off laying waste to the economy. But mass gatherings will not return – it is too risky for ourselves and for others we may infect.

Yet we have always routinely and thoughtlessly taken risks. And we didn’t seem to care much about how our behaviour and lifestyle choices might put others in mortal danger.

For example, approximately 1.35 million people worldwide die in road crashes each year, with an additional 20-50 million suffering non-fatal injuries. Cars are killers. When you add in the World Health Organisation’s estimate that 4.6 million people die each year from causes directly attributable to air pollution, which cars contribute massively towards, it seems insane that automobiles are even legal.

We should be on lockdown to avoid being killed by cars. But most get into a car every day, regardless of the fact that in a very real way, we could be contributing to the deaths and ill health of many people, including our own.

We worry about catching this virus, but not about driving to work, or walking along a polluted street. Yet, the virus has so far killed 203,000 people worldwide, so it’s on course to be less of a killer than the car this year. And yet a few green voices aside, no-one is calling for a car ban. We seem to be saying that dying in bed of coronavirus is to be avoided at all costs, but flying through your windscreen on the A19 at 70mph, well that’s just what happens if you want to get from York to Seaton Carew in your own personal metal box.

There’s no logic at play in this. Effectively we’re scared of a virus that might – but probably won’t – kill us, but haven’t taken this principle into any other walk of life. At least not until now. Maybe we will in the future.

Of course, it’s not as if we’re even that safe staying in our houses – 6000 of us in the UK die each year as a result of an accident at home. But we take those odds in our stride, it seems. We’ve got to be somewhere, I guess.

Around 15,000 people die from ‘normal’ strains of flu most years in the UK too. That has never stopped us going to the football, even though we will have caught it there, along with many other diseases, and we will have subsequently infected vulnerable people in exactly the same way. Few of us ever considered this before the epidemic. We just accepted it. But we won’t any more. Our thinking has been profoundly changed by this crisis.

We’ve realised that previously, we accepted those 15,000 flu deaths and wouldn’t have thought of closing football grounds to protect vulnerable people because of them. But after this pandemic, will we ever be so complacent again? I don’t think so.

But in this change of feeling about being in crowds, have we totally lost perspective? If you’re not over 65 (approx 75% of deaths are 65+) and don’t have an underlying health condition, you’re either unlikely to get it, or will survive it if you do. Okay you might pass it on to someone who is over 65 and has an underlying health condition but, as I say, this has always been the case and we didn’t worry about it before. We’d have said, 600,000 people die every year in the UK, it’s just what happens. The biggest cause of death is life. But I don’t think we’d say that now.

So should football grounds be open and open quite soon? Should we demand the government lets us just get back to normal and take our chances, the way we routinely have done every day of our lives? Some do (15% in my poll), but there seems little appetite in general..

There are people who think the current lockdown is part of the political correctness gone mad, health and safety (probably also gone mad) culture, that has turned a once brave nation into a bunch of namby-pambies. These people feel we shouldn’t be so cowardly. Death happens all the time, okay there’s a few more than normal, but it’s not worth shutting down society to save a few thousand mostly elderly or poor people, now is it? There are people who think like this, usually right-wing contrarians like Toby Young or so-ridiculous-he-sounds-fictional Tory MP for the Cotswolds, Sir Geoffrey Clifton-Brown.

“For the economy’s sake, for businesses’ sake, for jobs’ sake, we have to accept a little bit of risk”
You may have to die, but I don’t care a toss, he added!

They have a following or get a 25,000 majority because some people presumably share their world view. Maybe the sort of people standing in a crowd on Westminster Bridge applauding, standing in those huge lines at B & Q, or standing too close to me in the post office? But more typically such people have attracted widespread opprobrium. They’re not seen as fearless freedom warriors rebelling against the heavy hand of the state, as they perhaps would wish, but as selfish, ignorant stupids.

Yet, part of the problem in assessing the right thing to do is that it’s hard, nay impossible, to trust the politicians in charge. These people wilfully and systematically underfunded the NHS, and cheered their own decision to block a pay rise for nurses, leaving it unprepared and unable to deal with a pandemic as efficiently as possible. They are simply not trustworthy, and simply are not good enough. So without authoritative guidance we can 100% trust, we’re likely to hunker down as an act of self-protection. This doesn’t bode well for football.

Mass gatherings seem set to be outlawed for at least the rest of the year, possibly longer, in this country at least. A vaccine seems the only foolproof cure for our paranoia about getting sick, and that’s likely to be a year or more away. As I wrote last week, this will turn planet football into a wasteland. Even if the government allowed it, I’m not sure anything other than that 15% minority would turn up to watch, unless infection rates and deaths had dropped to near to zero for several months. And it seems unlikely it’ll ever not be present to some extent, just as flu etc is. The threat of kicking off another wave of infections will always be with us now.

What level of protection would we want to be in place before we return to the stadium, regardless of when the government says it is safe?

How about if grounds reduced their capacity by 50% to give everyone a bit more room? How about if everyone had to wear a mask, provided by the club? Would that ease fears?

How about if every player was tested every week and if every season ticket holder was regularly tested at the club? How about if no-one over 65 can attend for their own safety?

There are many measures that could be taken, but personally, I’m not sure there’s anything that could be said or done to make me go back into a crowded ground now, or at any time in the near future. It just seems pointlessly risky. I’ve lost faith, or gained wisdom, I’m not sure which.

Frankly, feeling okay about being in any crowd could now be a thing of the past for more people than we might care to imagine, especially for football’s largely middle-aged attendees. The very thought now feels wrong and it’ll take a lot of time and mental readjustment to shake it. I mean, I don’t even like passing people on the street and I’m crossing the road to avoid them. I walked out of the post office because people were way too close to me. The whole thing has messed with my head.

Prior to this, we were accepting of not trying much to prevent largely preventable deaths happening routinely, but maybe Covid-19 has changed everything for good. Maybe it has made us all realise we have been thoughtless and complacent. That we’ve been ignoring the consequences of our actions for far too long. That the consequences for our health, for other people’s health and for the planet’s health are for us to control and not surrender to fate or ignorance.

The sheer fear of Covid-19 may have made us realise we all need to live differently. If so, in the long run, it might yet, ironically, end up saving many more lives than it takes.

But football, along with many spectator sports, could never recover the majority of its live audience until, once again, we can happily and thoughtlessly ignore the health risks inherent in being in a large group of people, the way we have for so long. And for some of us, that just might never happen.