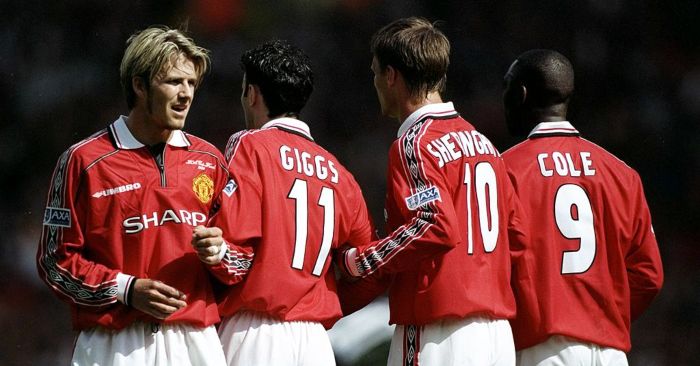 Expect Didier Deschamps to be dressed in his nicest suit around Paris on February 28, as the high court is to hear his case against Eric Cantona.

With the longstanding feud between the two reaching such a point as to head to actual judge-banging-a-gavel court we wonder which other footballing disagreements could do with a slice of justice.

So saddle up those kangaroos, baby, because we’re going to court.

First on the docket: Cole vs Sheringham

What’s it all about?
It’s 1995 and England are playing Uruguay. Manager Terry Venables decides to change things up; on comes Andy Cole for his international debut. These circumstances are the cradle of life for Cole’s rivalry with Teddy Sheringham, after Ted allegedly refused to shake his hand as they crossed on the side of the pitch.

Who’s in the wrong?
Handshakes are nice and all but, in this case, both parties are guilty. In not shaking hands, Sheringham is found guilty of one count of hurting Cole’s feelings, while Cole is guilty of multiple counts of not letting it go.

Sentencing
Only one thing for it: given Cole wanted to touch Teddy’s hands so much, the pair are to be handcuffed together, in true zany sitcom style, until they can put aside their differences. Next!

Next: Pickford vs Courtois

What’s it all about?
The best World Cup of all time was 2018. Remember how hot it was, the way the Box Park pints flew through the air, and Jordan Pickford helping England actually win a penalty shootout, looking like a world-beater in goal. With his booming punts and acrobatic saves he should have been immune to any criticism. Enter nasty Thibaut Courtois, mocking one of our Gareth’s golden boys, our honest Lion cubs, for being 10cm too small and throwing his legs around.

Who’s in the wrong?
Look, if this case had been heard two years ago then the heroic Pickford (1.85m) would have been let off, free to head down to a nearest warehouse rave of his choosing. But recent evidence has come to light: Pickford’s form for club and country has fallen off a cliff, and a string of taller challengers (Dean Henderson at 1.88m and Nick Pope at 1.91m) have emerged. Whereas before, Pickford’s heroics were a joy to behold, now you wish he was less noticeable. A string of high-profile errors perhaps suggests that Pickford’s eagerness to be the centre of attention has become detrimental to his performances. Maybe Courtois was right to question him.

Sentencing
With the Euros coming up, restoring Pickford’s confidence could be key to England’s chances of success. As a result, his lack of height is to be counteracted by shrinking Everton’s nets. If that doesn’t work, stick him in some platform shoes.

Next: Fabregas vs Ferguson

What’s it all about?
Who can forget the infamously ill-tempered clash between Manchester United and Arsenal that came to be known as the Battle of the Buffet? Back in October 2004, Arsenal’s 49-match unbeaten streak was brought to an abrupt halt as the United bullies committed professional foul after professional foul. A controversial Ruud van Nistelrooy penalty denied Arsenal the big five-oh and things came to a head for a bit of afters in the tunnel. As both clubs openly brawled, cheeky Cesc Fabregas took an opportunity to throw a slab of pizza at Sir Ferguson

Who’s in the wrong?
Now, Ferguson may have been a pro when it came to whipping up a rivalry, and his players may have started the fight on the pitch, but in the current climate (with a slice at the Emirates costing in excess of £4) I’m going to condemn Fabregas for wasting good pizza.

Sentencing
If Cesc loves throwing pizza so much then he can take his handsome face down to a Manchester branch of Pizza Express – Ferguson can choose – and do 100 hours of community service as a waiter. Case dismissed.

What’s it all about?
Being the worst Premier League team of all time.

Who’s in the wrong?
Well it was a perfect storm of ineptitude really, but the brunt of the blame must surely rest with the Derby players. Now, I’m no expert in contract law but I imagine there was at least a fleeting reference to ‘playing football’ in at least some of those deals. Quite clearly, given the performances they turned in, they were in breach of that.

Sentencing
This judge always believes in second chances, so Derby County are to be reinstated into the Premier League as of next season. However, they’ll be forced to field the exact same squad that took them down. Savage, McEveley, Earnshaw; the boys are back in town. However, if they don’t manage to scrape together more than the 11 miserable points that took them down then, like a footballing Sisyphus, they’ll be forced to endlessly replay the same season until they do.

What’s it all about?
Some creatures are biologically wired to be mortal enemies. Cats and dogs will never get on, and neither will Roy Hodgson and Harry the Hornet. Hodgson hates that hornet, branding him “disgraceful” after the mascot mocked Wilfried Zaha with a series of diving gestures.

Who’s in the wrong?
Hodgson has been in the game long enough to know better than to fight a mascot. But it’s Granddad Roy. Surely he can’t be nasty? Fighting mascots is a slippery slope, too. What next? Is he going to take on West Brom’s Boiler Man because he can’t read the meter clearly enough?

Roy’s built a reputation around being a nice, grandfatherly figure. But sometimes he lets this veneer slip, and that’s not good for the game. If Roy’s not actually nice (and several stories in his history do suggest an edge) then what other self-evident truths might unravel? Is Ed Woodward good with a budget? Does Big Sam actually drink coffee in the pub? The Premier League is in the business of saving face, so we can’t deviate from the norms. Roy cannot be in the wrong. The Hornet must be hushed.

Sentencing
Throwing this case out, but don’t be surprised if Hodgson makes a suspiciously generous donation to a charity set up to protect Britain’s insect population.