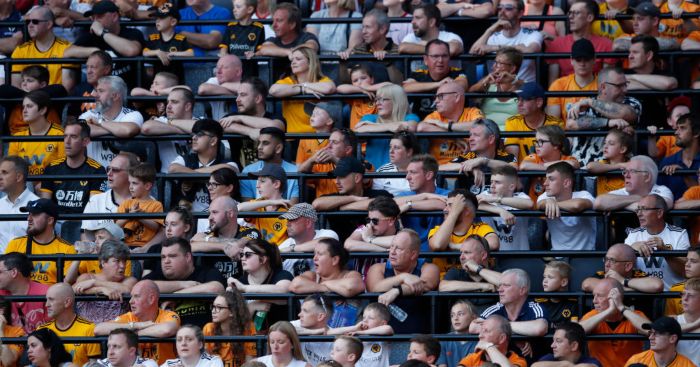 There is one point in every football season which stands alone: the first game, just before kick-off. Regardless of when it happens, the experience is the same for all of us. We will not feel the way we do in that moment for a full year. It is brief and fleeting and that’s why it feels so special for us all.

Hope in the heart briefly gets the better of cynicism in the soul. Like sliding naked between cool, fresh linen sheets on a hot night, momentarily everything feels pristine, untainted. The game has been reincarnated once again and this time around, at least just before kick-off, everything will be fine, could be fine, probably won’t be fine. But you never know; there is hope, there is always hope, sometimes for winning a title, sometimes a cup or a promotion. Sometimes for just winning a single game. Sometimes hope just to have a good time.

At this time of year, it becomes self-evident that football is phenomenally popular. It is sometimes easy to forget exactly how popular. Go through any city, town or village in the land and there is pretty much always a football club of some description from the most northern professional outfit, Wick Academy on the wild Caithness coast, down a mere 741 miles south west to Plymouth Argyle. From Shetland to Guernsey, you will always find an FC. My village is home to just 1,400 souls but has an amateur club with a one-hundred-year history. And all across this vast football landscape, seasons are starting.

However many turn up to watch any game, at any level, the moment before kick-off of the first game is an experience which momentarily unites us. We return to the company of strangers, who are not really strangers. We often don’t know their names but like you, they are always there. You give a brief nod to the gadgee you always stand near behind the goal. There’s Mrs Hughes who hasn’t missed a home game since she gave birth to Jack in 1968. And over there is that scary lad with the spider’s web tattoo on his face who you don’t look at for more than half a second. Wish he didn’t turn up.

You say hello to the lass who sells the teas, who you secretly fancy but can’t find a quiet moment to ask out and you have a brief word with the elderly program seller who has been doing that most important matchday job since the 1950s.

I don’t know any of these people, but you do. This is our world. The football world.

Because football is about Us. The People. It’s part of the architecture and fabric of our local lives, from the most modest recreation ground goalposts to the most imposing modern stadiums. It is hard to ignore.

This is brought home powerfully in a place like Newcastle. When a goal goes in for the Magpies, 52,000 voices noisily echo across the city centre in a sonic tidal wave. You can’t ignore it. People will turn to each other and acknowledge the goal perhaps with a roll of the eyes, a laugh, or perhaps with a small shake of a fist. Football: even if you want to ignore it, you can’t.

And while St James’ Park’s location guarantees its impact on Saturday afternoon shoppers’ lives, to one extent or another, great or small, this is repeated nationwide. Even if it’s just three raised voices acknowledging a goal in the Macleod & Maccallum North Caledonian League game between Golspie and Invergorden, the first strike for South Bank FC in the Stockton Sunday League or the Anfield Kop roaring in another Mo Salah goal, at core and in essence it is all the same thing: a single thread which connects us all together into one organic whole.

And we need that unifying feeling so badly in our lives, which is why we love to belong to football more broadly, not just to a club. That’s why it continues to thrive, like a persistent flower able exist in even the harshest of environments. Yes, it is football itself, but it is at least as much about absolutely everything else that orbits around its planet like an over-sized moon exerting a profound pull and push on the game.

Once again there is shape and form to each week. Once again we have the skeleton upon which to hang the flesh of our lives. Now when you wake up and can’t quite recall what day it is, you can always remember the last game you watched and which day it was played. It relocates you and offers you an informal support system.

Once again we have our football routines back to give order to every day. Matchday visits to the same pubs and cafes and chip shops to see the same people. TV and radio shows give us all a timetable for our existence. The joy of a glass of something strong to greet 5 live’s Monday Night Club every Monday at 7pm is one of my small pleasures which I look forward to every week of the season. Trans Euro Express on Sunday nights on talkSPORT is another. And of course Match of the Day, a programme which took me from a child, to a boy, to a man. Always there, reassuring and reliable like a well-worn leather belt holding up the trousers of our existence.

Life ticks over around the ongoing, vast, multi-layered, multi-strand psychodrama of football. Only when it is taken away at the end of the season do we fully realise what a supportive life matrix this is because without it we feel – not bereft, exactly – but everything loses some of its grease and works less smoothly.

My missus even takes to asking me from time to time “are you alright without your football?” – how am I coping with the lack of my usual soccer-based routines? Today, we do not really have the truly barren period of yore. A period manifested by the appearance of the dreaded Australian Football Pools and alien club names that truly did feel as though they belonged to a distant world. Back then, summer drifted on as formless as mist as you filled in the time you would normally be thinking about football with thinking about cricket.

Fixtures lists would appear in June, hinting at the pleasures to come but like a mirage in the desert, it cannot quench the thirst until that seemingly always-sunny first day of the season arrives to offer its cool refreshment. And now that fixture list invests us with anticipation and we have something to look forward to. And so the mind wanders forwards in time to those games played in the last heat of summer and those played in the first gales of autumn. To those games when the frost settles as the sun goes down, freezing you to the marrow. And then there are night games with a nip of something strong in your blood to keep out the cold. Yes. All to come, now. All ahead of us, beckoning us into the future with a smile once again.

There will be disasters and triumphs, there will be glory and heartache, purple patches and barren spells and we will all be there to witness and absorb them because football is The People’s Game, and we are the people it is played by and played for. Not for some giant corporation, not for some distant businessman, not for the profits of a hedge fund manager, not for window dressing the image of a dodgy company, regime, industry or anything else.

Never forget, it’s our game. It belongs to us. Every one of us. Across the north, south, east, west and everywhere in between these lands, we hold this precious sporting pearl in our hands. Let’s treasure it, let’s protect it, but above all else, let’s really bloody enjoy it.

Is everybody in? The ceremony is about to begin.