Home Johnny Nic What is the future of bloated football journalism? 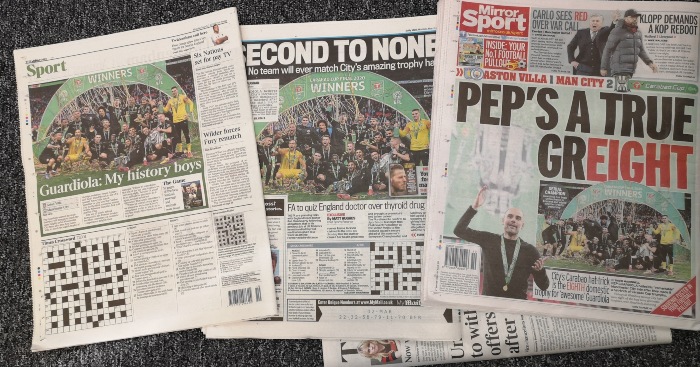 What is the future for the football press in the UK? With sales of hard copies down every year, online subscription models yet to deliver profits the way the newsstands once did and advertisers’ spending focused heavily on social media and searches rather than display, it is a tough environment and likely to get tougher for these big, expensive operations. Everyone is looking for a way to survive. But here’s the problem – there’s just too many newspapers.

This week I read 30 articles about football on newspaper websites – I never buy papers – and these were mostly pieces in the Guardian, but also the Independent, New York Times and Teesside Gazette. I am subscribed to the Athletic but have to confess I’ve lost interest and haven’t read anything for a month or more. It feels like a cold, functional aggregator and there is something, as yet nameless, in my psyche that doesn’t feel at home there.

I almost never read match reports or speculation about upcoming games, never read tabloid websites for pleasure and tend to favour pieces from the same coterie of writers and ignore the rest. I have no idea if mine is less or more consumption than typical, but it barely scratches the surface.

Clearly the sheer volume of football in all newspapers indicates they see the sport as some sort of guarantee of clicks, if not paper sales, which seem in terminal decline, with last summer’s figures showing a decrease in readership for every publication of between 3% and 18%. The Sun is still, somehow, the best seller at 1.2 million. So when we think about the future of football in newspapers, it is obviously online, which is ironic really because we at F365 were for many years derided by some men in Fleet Street as merely internet writers, like that wasn’t really a credible job.

But many well-followed football journalist’s Twitter accounts do not reveal a consistently high level of engagement which, though an imprecise way to judge anything, at least suggests a degree of disinterest. To take a random example, over 24 hours after John Cross’s interview with Wilfried Zaha was tweeted, it had just 250 likes and 14 comments across three Tweets, yet his account has 335K followers and The Mirror gets around 25 million unique users every month. So with those sorts of numbers, you’d expect far greater engagement wouldn’t you? Even if it was just abuse. I realise the limitations of judging popularity in this way because many may simply read and make no comment, but this is not an unusual example. Unless a piece criticises Manchester City, United or Liverpool, engagement numbers are largely modest and that must tell us something.

There are over 20 national newspapers if you include the Sundays and freebies and all of them cover football over a lot of pages. Add in the local papers covering local clubs as well as professionally produced websites such as ours and others, and the public are constantly bombarded with football content. While football is very popular, too many outlets are clearly chasing the same audience often with very similar content, and that may help explain those tabloid undernourished engagement figures.

If we accept that there is just way, way more football writing than the market wants to consume – and there simply must be when the Guardian alone has at any one time 50-60 articles on its main football page from the previous six or seven days and that’s without mining each writer more deeply – then the whole industry is going to have to shrink markedly and soon because how can this be sustainable? Many papers are already losing staff through natural wastage as well as through redundancies.

But publishers are still just wasting money paying journalists to do things that are no longer relevant or useful in 2020. For example, there’s simply not enough value in match reports anymore, no matter how well-written. They’re already out of date before ink hits paper, and in the age of social media, increasingly before the writer even presses send. The news has happened, been digested and debated in real time and doesn’t require one more repeat by a dozen different national papers. Seeing all the national papers’ football writers lined up in the press box to do largely the same report on the same game, using the same facts and figures and even apparently sometimes agreeing a collective stance afterwards, seems really odd from a commercial point of view. Why pay for that to happen? Surely you want unique content not the same everyone else.

The game’s facts are available in real time. The paper’s own live blogs of games (are they popular?) feature stats that are subsequently regurgitated in the match report, the publishers thus effectively paying twice for two writers to deliver the same thing and will be similar across all your competitors. That’s not a good use of dwindling resources, it’s poor business. Again, you’re just paying for the same stuff everyone else has got. Why?

Match reports used to dominate every paper’s output, as did working the press conferences at football clubs, but they are also an increasingly worthless expense. The press officers have never had more power over journalists, and the club less need of them. Taking their lead from Pravda, many bigger clubs would rather issue their own ‘news’ in pursuit of establishing their own narrative, to suit their own purposes. They do not want independent scrutiny. Indeed, many now have owners who are used to doing whatever they want without criticism from anyone and have no desire to subject themselves to questioning, thus they keep journalists at arms length knowing they no longer need them to be their messengers when they can create their own in-house propaganda that fans will eat up as though it is fact.

For some fans, the credibility of journalists has been undermined by being supposedly ‘biased’ against their club – a misplaced paranoia surely encouraged by some owners – and they now trust the club more than anyone from the outside, seemingly unaware of how vulnerable this makes them. It is a worrying trend and yet one we see parallels with in politics. We need journalistic scrutiny but press conferences are not the route to take for that any more.

Trouble is, trust in journalists – often seen as a single amorphous group – amongst players is at a low level after decades of being stitched up one way or another, and means many are less keen to cooperate with an industry which has often caused them much grief. They’ve got social media accounts to get any message out and to connect to their fans if they wish; they don’t need someone from a newspaper to do that, not least because the newspaper probably has a smaller reach than he does. The club is also happier if players don’t blab to the press. When we see journalists reporting what a player has said on their Instagram account as news, we can see the end of their world is nigh. Once newspapers originated content, now many are increasingly just regurgitating that which it has harvested from elsewhere. Is there a future in that? No.

Sometimes the whiff of desperation is palpable and leads to the more egregious examples of shallow, pointless, occasionally deceitful football journalism created in the hope of getting clicks, that we highlight in Mediawatch. I suspect most of those are a consequence of too few staff being required to fill more space than the subject matter can be stretched to accommodate. Hence we get all the tired ‘how AnyClub FC would line up if they bought three AnyStars’ pieces, no matter how fantastical such transfers might be. Can there really be any future in that? Transfer gossip is popular, but don’t invent it and just excuse the fiction away with ‘could’ ‘thought to be’ and ‘might.’ because all that has done is alienate more and more people, who have learned to mistrust pretty much everything written, especially on tabloid websites.

Trouble is, we’re now in such a parlous state that falsehoods or distortions do not seem to matter to some publishers; only clicks are important. It is a ‘live for today and pay no heed to tomorrow’ strategy that all businesses that are going down the pan have, but one that will be the ruin of them, because there comes a time when you no longer click on the outrageous transfer speculation because you know it’s all BS. Soon, you apply that discrimination to every REVEALED non-entity of a piece, then you no longer visit the site. And then it’s all over.

And yet in other ways, the quality of the football press is in rude health. David Conn’s work alone has been beyond valuable. I’ve read some fantastic pieces with really deep, original thinking, research, wit and insight from, to name just a few, Jonny Liew, David Conn, Suzie Wrack, Rory Smith, Miguel Delaney, Barney Ronay, Jonathan Wilson, Michael Cox, Jonny Northcroft, Henry Winter and many others. It is also noticeable that many of these writer’s pieces do sometimes get a little more engagement from readers, but is the audience too small and narrow to justify the costs of producing their work?

For example, Rory Smith’s NYT piece this week about the rise of Monza to the top of Serie C under the ownership of Silvio Berlusconi was typically interesting and enlightening. It is exactly what I love to read about and came away feeling better for the time spent. Yet it came from an entirely different planet to the ‘footballer goes to restaurant with wife’ or ‘player hints at something which we’re distorting to imply it could happen when it absolutely won’t because it is ludicrous’ 171 word pieces that populate so much tabloid newspaper output. While the most vacuous downmarket stuff hopefully is entering its commercial end game, at least under the guise of football journalism, are there enough readers of what is sometimes uncomfortably called highbrow writing to justify the expense to publish?

This was recently put to me succinctly by an editor thus: “Is there more money in appealing to thick people or clever people? The thickies have the numbers, but the clevers have the money. That’s what I try to weigh up all the time. You tell me. Dumb or intelligent? Which way do we go? Where is the money?”

That seemed a crude, nihilistic typically stark Fleet Street assessment to me, but it’s easy to see what he means

If the Athletic model crashes and burns in the UK as a great many expect it to do, unable to garner the number of subscriptions at the right price to pay its huge costs (and it does seem to be in perpetual discount mode) it may illustrate well just how bloated and over-supplied the football press market still is in the UK, and the public’s resistance to a subscription model.

But a radically slimmed down, broadly more cerebral football press which stops wasting money on producing that which there is no demand for and cuts its cloth according to its means, well, there could be a future in that.

I certainly hope so because we’ve never needed the bright light of in-depth analysis shone into the dark corners of modern football more and without an intelligent free press holding the industry to account, just as in politics, the dogs of war will run free.