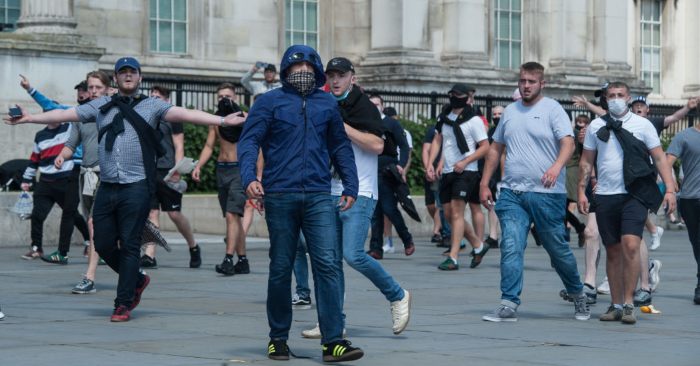 Satire is dead. If there were any doubts about this, they were blown away on Saturday by watching grown men – described on BBC R4 news as “England football supporters” – chanting ‘there’s only one Winston Churchill” and “Winston Churchill, he’s one of our own” in football style while making Nazi salutes and claiming to want to defend symbols of British history, whilst fighting with the police who were there to protect those same symbols of British history. Confused? They are.

Some of these were the self-styled Football Lads (no women allowed), a term which taints both football and lads. I know almost all of us would wish for these people to be uncoupled from the game, but they looked like a mob of England fans on an away day to some nearby European city, there’s no getting away from that. I know many say they’re not football fans, they’re just bad men looking for a fight, but that’s just running away from the truth. Some absolutely are fans as well as thugs. These people have polluted football for decades, but we are at a point of change.

One thing; can you stop calling them “Football Lads”? Because they’re fucking not. I’m a football lad. I live and breathe that game and these absolute vermin do not fucking represent me or the overwhelming majority of people who love our game, AT ALL.

Up go the dumb chants of Engerland and Ten German Bombers, always the rallying cry for the brutish bully and seemingly also an excuse to remove your shirt. What is it with the right-wing hooligan male and being topless? They can’t get naked quick enough, can they?

It must be a confusing time for your average right-wing football fighty nationalist. There they are chanting Engerland, but England is a team full of players of many and varied heritages, who are going to be wearing Black Lives Matters on their shirts this week, taking a knee in solidarity and generally being decent and inclusive. God, the Football Lads must hate this England, but still they chant Engerland as a mantra to a time that has gone.

That such people still identify with and orbit football in their polo shirts, like it is still 1979, is – on the surface – quite surprising, really. Football is not a safe or sympathetic haven for English nationalist bigots and racists these days, not the way it once was, anyway. Do they think their supposed glory days will return? If so, they must not understand or realise that the vast majority do not think like they do, are appalled by them and, perhaps crucially, laugh at them.

It must be such a puzzling world when you have their world view. They’ve been encouraged by the rhetoric of politicians that they were going to take back control of their country, whatever that might mean to them. It’s even stated on their flags.

But no taking back control is going to happen in any meaningful way. Not least because the country’s assets have been sold off long ago and real power farmed out to global capital. So they’ve believed a lot of lies.

These hard men of England have been ceaselessly manipulated and used by smirking politicians for their own ends. Sold lies by liars, suckered into a distorted, warped and untrue world view by various cults of personality, encouraged to be angered by other people’s voicing of their own grievances, all of this is fermented with a level of ignorance and stupidity that is the legacy of a poor education, abusive upbringings and a crisis of undiagnosed mental health problems that cocaine and booze develops, feeds and drives. And you end up with a holy hot mess of nameless anger at…at…just everything, mate.

Thousands of hooligans, far right activists & veterans turned out in central London today supposedly to defend the war memorials. Instead, there were repeated violent clashes with the police. The day ended with an image of one of them urinating on the memorial to PC Keith Palmer.

As you incrementally (though far too slowly) lose power to feminism and racial equality, to justice and fairness, that which you took for granted – your superiority, your dominance, a country that looks like you – is being diminished, regulated and outlawed. Even your brand of masculinity is being called out as toxic, destructive and pretty much the cause of every problem on earth. If it feels like you’re being picked on, that’s because you are and for good reason.

To most who go to the football, these people now look like ghosts from a gone world. Troubling and scary ghosts, yes, but ghosts nonetheless. Arcane, out-dated, out-moded and increasingly out of time, it is only in sporadic displays of bullying and violence before and around England games that we usually see them in a soccer context nowadays, though that’s not to diminish the problems and upset they cause on those occasions.

Loathed by most football fans, mocked by many on social media, identified by iPhone footage, caught by CCTV and arrested by the police, who’d be a hooligan in 2020?

If you followed events on Twitter and elsewhere, you’d have seen people laughing at them, like they were characters in a play. The bloke who looked like an angry Santa, there’s Sugar Ray Leonard in a green shirt doing hand-rolls trying to punch a shortish female officer, the man telling someone that Churchill killed Hitler, the confused, incoherent man with a mask on his chin who wore the expression of someone recently struck by a bus. The man caught pissing beside the sort of commemoration he was supposed to want to protect. Cliched and stereotypical, on and on it went, this dark dystopian comedy. And then to top it all off, possibly the most wilfully divisive and intolerant newspaper in the land runs a headline asking ‘What Has Become Of The Tolerant Britain We Love?’ Yeah, satire really is dead.

The Mail asking “What has become of the tolerant Britain we love?” is like a serial killer asking “I wonder how all those mutilated corpses came to be bricked up in my basement?”#Dontbuythemail #farright #londonriots pic.twitter.com/g5saoRSojK

Many of us worry that bigotry and racism is on the rise, with an increase of racist incidents within grounds, but maybe Saturday was proof that they’re actually losing this war, that those who just want to make life safe, just, fair and content for all, are winning so handsomely that it is driving these men absolutely crazy. I hope so.

Despite the dog whistle politics deployed by some of the more despicable in power to attract support, those politicians and the racists they try to appeal to, are steadily being undermined and hopefully marginalised by mass mockery, acidic critique and pointed loathing.

There is still so much work to do, but how beautifully and powerfully ironic that it is the footballers who are actually leading the charge against what the Football Lads stand for by being empathetic, inclusive, educated and just downright decent. In doing so they are proving that football does not want and does not need the so-called Football Lads, it rejects them wholeheartedly, it will not tolerate them and is 100 percent against them. That is, at least, something to give us all hope.