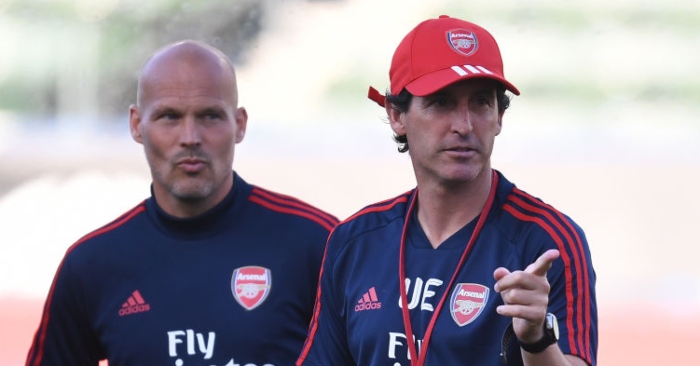 As another week goes by and more managers are sliced off the football body politic like so much overcooked roast beef at a Sunday carvery, football’s managerial short-termism and its ineffective, expensive addiction to defenestration as a cure-all for a club’s ills is exposed once more, as it makes failed managers rich with pay-off cash.

Only 23 managers in all four divisions have been in their current job for over two years; 24 have been in the job for under 100 days. The newest of these is Duncan Ferguson.

You’d have to have a heart of stone not to love his touchline antics this weekend. The galloping manager is a wonderful sight to behold. You can’t beat the art of galloping. And you can’t fake it. Hugs all round. What a great day, what a great win. The side was transformed. All dreams can now be dreamed again. Believe.

But therein lies the problem.

A win in football is an intense flash of white light which temporarily blinds us to everything else. It is bleach around the bowl of an unsanitary toilet, or the first breath taken after being underwater; suddenly everything is transformed and improved exponentially. Never mind what the future holds because right here, right now feels great and that is a very addictive hit of dopamine, perhaps the hardest toke on football’s crack pipe. It goes a long way to explain the game’s short-termist culture. Indeed, it explains the reason behind the human race’s evolutionary dead end instinct to ignore tomorrow in favour of a good time today.

Managers are always being spoken of in football parlance as being “under pressure” and needing “more time” but they rarely get it, partly because if the correct structures are in place at the club for the new man to impose a well-defined vision, it needn’t take that long to see improvements (see; Graham Potter, Brendan Rodgers) but while fans judge the new man against that standard, it is rarely the case.

The soap opera also demands a high turnover of characters to hold our interest. So in the latest episode of Hollyoaks (or perhaps Albion Market…one for the kids there) out goes sexy brooding foreigner Marco – for a while at least – and in comes working-class hard man hero, Duncan. But it is merely a new plot in the same old story.

Trying to solve problems – real or perceived – by sacking a manager and getting another is very much the marker pen choice in a copperplate writing contest. Whilst accepting in certain circumstances it can be the correct solution, more often it is a crude, one-dimensional option to placate the rebellious, noisy gallery. It suggests the problem was all in the dugout when usually, the whole set-up at the club is broken and all but guarantees the new man will struggle sooner or later too. Everton illustrate it perfectly.

With nearly half a billion spent in recent years on players and Ferguson being the seventh boss in 43 months, can there be a gram of confidence that any manager can ever turn them into a top-six club until more profound, deep change is enacted?

As we’ve seen with Manchester United, when the problems are myriad within the organisation and have already hampered long-proven coaches like Louis van Gaal and Jose Mourinho, they will presumably continue to do so until corrected, no matter who is in charge.

For any club to simply keep hiring a new manager in the hope that this time their particular brand of fairy dust will make everything sparkle is not just naive, it’s neanderthal thinking, irrelevant to the real needs. A more holistic approach is a must, but never seems to be understood by those who need it most.

As I’m sure Duncan Ferguson himself understands, today’s hero is tomorrow’s zero. When a loved ex-player is a winning boss, briefly all seems perfect. At last a manager who ‘gets’ the club, a manager who ‘knows’ the club, a manager who cares about the club in a way that the last man never could. Look at his passion. Look how much he cares. That’s why the team won on Saturday, or so the story goes. And everyone gets caught up in it, understandably so. And it’d be wonderful for all we romantics if it were true. We’d all love it to be true. But it’s just the white light of the win blinding us.

In the same way you shouldn’t believe a one-night stand is true love, managerial decisions shouldn’t be made in such febrile circumstances, because we’re too quick to praise and too quick to lambast. This is largely a consequence of the huge volume of football media, an infinite proxigean spring tide that threatens to drown us every waking hour. Pages need to be filled with something, so any and every passing notion or judgement about a manager or player soon gets ploughed into the football topsoil and quickly sprouts further speculation and stories until there is a veritable jungle for the manager to cut a path through.

Before you know it, the new man is useless and an even newer man would be an improvement, even though – as the Soccernomics book showed – a new manager only makes a very short-term difference and the side soon regresses to the mean. Of course when you’re facing relegation, that uptick in results can be the small difference between staying up and going down that season, but it is far from the panacea for a bright new future it appears to be on his winning debut.

As the book says, you may be as well to wait for things to pick up with the old man, as get a new man in. In fact, it wouldn’t be the worst rule for UEFA to impose a managerial transfer window once per year, thus forcing clubs to stick with the current hapless goon they so recently thought was the answer to their prayers.

While there are exceptions such as Potter and Rodgers, there are many non-managerial factors in the success or otherwise of a football team. Most of the time, most managers make somewhere between a little and not very much difference to a team. They change things yes, but are West Ham so much better now than under any of their last few managers? Are Watford? Are Southampton? Are Newcastle? Are Chelsea? Are Arsenal? If none had changed managers for years, would they really be in a much worse or much better position? We’ll never know but it’s at the very least not obvious they would. Not significantly. But it never feels like that because we see the highly exceptional difference-makers like Chris Wilder or Rodgers and we judge the whole managerial database against that.

The thought of sticking with Unai Emery or Marco Silva just became depressing, and that’s so often the change driver. There are apparently those who are now sick of Pep Guardiola since City have started losing, their dopamine receptors twitching for another hit of the good stuff from their football dealer.

Too often we credit managers with so much heft and weight, something that the cult of personality around the likes of Guardiola, Jurgen Klopp, Jose Mourinho et al only helps fuel, so we find it hard to believe that they all don’t hold all the power to deliver success, as though it is a magic spell they and they alone can cast. Once in that mindset, the club playing poorly becomes wholly the manager’s fault.

The truth is far more prosaic. A team being consistently good or bad is about money, recruitment, structure, coaching, research, injuries, luck and a myriad of other marginal differences, not just the man in an expensive coat shouting at you, or in Silva’s case, staring silently as though looking into the abyss. By and large, we invest too much in managers, we rate them too highly, credit them with too much influence and thus put too much of the blame for poor results on them.

One certain truth remains throughout football; wins wipe away the sins, but losses wipe away the bosses. While that remains the case, football will be addicted to making blinkered shallow short-termist decisions to solve what are often deep, long term problems.