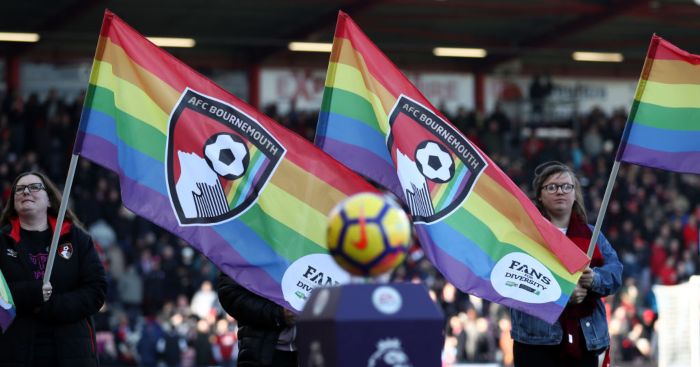 Football is leading the fight against racism but must yearn for inclusivity in all areas. Time to come out and take a stand.

Last week something very unusual happened. The first male English footballer since Justin Fashanu in 1980 came out as gay. Thomas Beattie, hailing from glamorous Goole, had been on Hull City’s book as a kid but left aged 19 to have a career in America, Canada and Singapore.

Why now? Because he’s retired and after many years of struggle, now 34, he feels in a good place to talk about it. In this he followed Thomas Hitzlsperger and Robbie Rogers in talking about their sexuality only after their career in English football was over.

This once again raises the question: is male football homophobic? By his own account Beattie found it difficult to come to terms with his sexuality for many years.

“I understood I was different from the rest of my friends, but I never really could pinpoint what it was,” he said. “I didn’t want to dive deeper and self-analyse that, because that process was pretty daunting to even consider.”

But football as an industry didn’t offer him any support at all. Indeed, he used football to distract himself from his struggles. And this wasn’t in the 80s or 90s but only a few years ago. It left him feeling isolated and alone. This shouldn’t be the case. While clubs have, in recent years, begun helping players with mental health issues such as depression and low mood, is it being openly supportive and welcoming when it comes to sexuality?

The answer must self-evidently be no.

We know women’s football is way, way ahead on this. Wherever anyone finds themselves on the sexual spectrum at any one time doesn’t seem to be an issue at all within their game. Everyone seems very relaxed about it, and that’s absolutely as it should be, obviously. This isn’t to discount personal struggles and issues, but it is clearly a far more supportive environment to work, play and live within. Megan Rapinoe is a huge star and an inspiration to millions. Can we imagine a openly gay male footballer doing what she’s done? No we can’t.

So why is it so different in the men’s game? Why can’t it follow the female lead?

“Football’s a very masculine sport – it’s played and watched by typically very masculine guys, and society over time has told us that masculinity and sexuality are linked. We know these two things are in no way linked, the same as femininity and sexuality – I know some of the most feminine straight guys in the world! But that’s the perspective from the outside and people still don’t really know how to approach that.”

This where the core issue seems to lie.

There’s no reason that anyone of any gender should have to make a statement about their sexuality, of course, but we all should have the right for it to be simply evident. No big thing, just normal life going on as normal. The fear of being ‘the one’ who comes out, and having the burden of the inevitable media hoo-hah, understandably must put people off. We all just want to get on with life.

Back in the day, it would’ve been said that being openly gay would attract a lot of abuse from fans. Is that still the case? There’s no doubting football’s abuse culture. So only a fool would rule it out as a possibility. But hopefully it would only be occasional, sporadic and self-policed by fans. And hate speech is now illegal. Will people really want to be arrested for using homophobic language? It seems less likely that this is a block to inclusivity.

It was also thought to be bad for team morale in a ‘backs against the wall, lads’ culture. If you were not ‘one of the boys’ you were a problem. Would this be true now?

It is easy to think it wouldn’t be; that surely we are all more progressive these days; that we all have gay friends and family and that it seems no more remarkable, let alone shocking, to be gay, than to be straight. Easy to think that because everyone we know is like that, everyone else is, too. But they are not. So the fear of having them in your face, being horrible, is real. That’s why we need men’s football to be seen to be a safe space to be gay or bisexual because right now, it obviously isn’t.

Think about it. How often have we heard any player or manager talk about these issues? If it does happen, it is occasional at best.

We need players and managers to talk about the issue without fear but with knowledge and understanding. We need it to be something which is in common currency and not hidden away as though there was something wrong about not being heterosexual. We need clubs, owners, the FA and everyone else to say whichever page of the book of sexual preference any of us are on today is fine. We are one. We will support each other. And to keep on saying that, so it becomes normalised in the same way it has in some other walks of life because right now, it just isn’t and that’s not only wrong but deeply unfair and upsetting to those who are not free to be open about who they are in a way that heterosexual people totally take for granted.

It is no longer enough to merely know we are not personally homophobic – it needs to be vocalised. It needs advocating. Quiet agreement will not change the football culture, it needs proselytising by all and sundry.

The Premier League supports Stonewall’s Rainbow Laces campaign for a week in December, and speaks well on its website but it is clearly not driving change, or at least not quickly enough. It is one week in 52 and as such, easily compartmentalised. Has it become more emblematic than revolutionary? I heard Dion Dublin recently say, in relation to racism, that it was time for action, not for just wearing t-shirts. It struck me that rainbow laces might just be in the same place as Kick It Out t-shirts. We can’t rely on mere emblems to do the heavy lifting on this.

The culture of male football is obviously not seen as supportive to gay men. And that being the case it makes becoming a footballer a very resistible choice for those men who are gay, or who are working out their sexuality.

This may in turn explain the apparent paucity of male gay footballers. Perhaps they’re being put off the game by an unsympathetic culture. Beattie himself said he felt he had to choose between being who he was and playing the sport he loved. It should never be that way.

But we know that in any walk of life, if you can’t see it, you can’t be it, or at least it makes it very, very hard to be it. How many great footballing talents have been lost to the game because male football culture is, in a very literal sense, repulsive?

Even so, as there are about 3,000 professional players in men’s football in England alone, it seems statistically unlikely that none are gay.

Clearly, people are weighing it up and no amount of rainbow laces one week per year are making them feel any more comfortable with being public, even in a modest way, about their sexuality within football. Obviously, it isn’t a unique industry in this respect but compared to the culture in the theatre or the arts in general, it is very repressed. This must be down to warped views of what Being A Man means. That relationship Beattie talks of between physicality, masculinity and sexuality is fractured and dysfunctional.

We need football clubs to be open and understanding and to appreciate the nature of some people’s sexuality. It’s not always as straightforward or as binary as purely gay or straight. It can be a more nuanced, complex and a shifting thing. Maybe players don’t want to ‘come out’ as gay because they’re not yet even sure if they are.

This seems to have been Beattie’s route. It took him until his late 20s and being forced out of the game through injury to really understand himself and feel confident and free to talk. That his willingness to speak now has made headlines all around the world in itself illustrates how far male football has to go. ‘Male footballer is gay’ shouldn’t be a headline. It shouldn’t be that exotic or remarkable. ‘Female footballer is gay’ notably isn’t.

So it would appear the fact gay or bisexual footballers clearly do not feel comfortable with this fact being known in the male game is a problem that originates not in football per se but in the culture of maleness we’ve built outside of the game, which is then carried into it and sustained by it. That is the problem.

That is why women’s football doesn’t have a problem: they’re not men. Take men out of the equation and look how much more inclusive, how much more relaxed and nicer things are. We might not want to admit that this is the case, but the evidence is in and is very clear. Just look at the two games: one uptight and oppressive; one open and inclusive. It tells us all we need to know.

But change is always possible. In many ways football has become so progressive. It is leading the way in tackling racism and does so much good work in so many fields. So we know it can be a force for good. We know it is in the women’s game.

Perhaps if men’s football wants a slogan or hashtag to focus upon, #bemorelikethewomen isn’t a bad place to start.