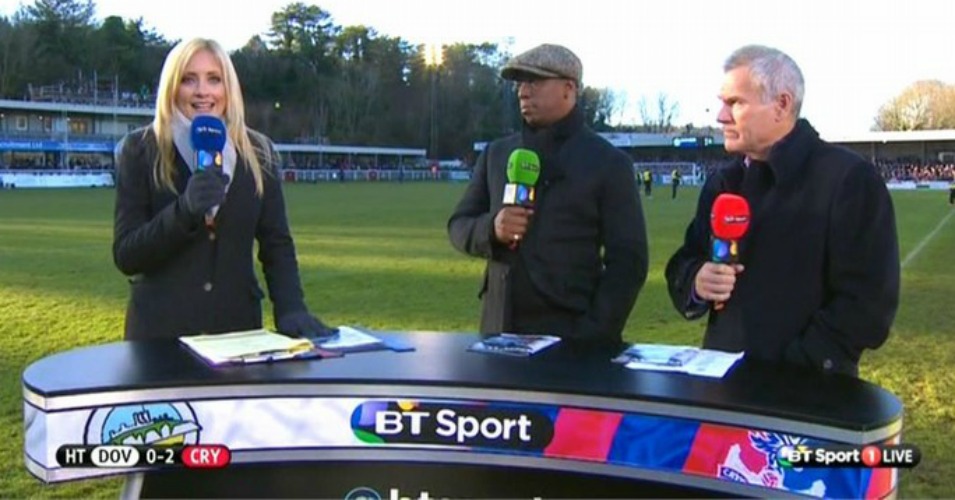 John Nicholson wonders if anyone still has a black and white TV licence while watching Lynsey Hipgrave on BT Sport.

Fashion police
It must be tricky to know what to wear when you’re a woman on the telly because women tend to be judged purely on appearance far more than the humans not blessed with vaginas. Dress up too much and it looks like you’re doing a fashion show, rather than presenting sport, and consequently won’t get taken seriously. But go without war paint and tight clothes and some will assume you’re living with Claire Balding. In short, you’re on a hiding to nothing as a woman on sport telly. There’ll always be someone who just can’t get past what you wear and will take to social media (or a well-read website) to dissect you. Must be very annoying, especially if you’re not interested much in clothes and just like talking about football.

When in the studio, Lynsey often favours the fastened-up, the smart, and the strong, single colour, shirt-things (you can tell I ran a fashion design business in the 80s, can’t you?) Often sports the long, blonde, centre-parting haircut of a mid-70s rock star. This is a very good thing. Big blue, almond-shaped eyes are very expressive. Not afraid to go against her Geordie genes and don a hat and parka for pitchside winter interviews, rather than the north-east tradition of wearing a dress the size of a hanky. Poof.

Lingo bingo
Classic Geordie accent that hopefully will not be softened by time in London media. Never actually heard her say ‘haddaway and sh**e, eh, bonnie lad’, but it is not hard to imagine.

When presenting European football on BT Sport, is noticeably always across the tricky foreign names, which can’t be said for everyone we see on our football telly. Indeed, is always superbly researched for her gigs and that, combined with an approachable accent, gives her work a relaxed but authoritative confidence. Working alongside Danny Baker on 5live brings out some pleasing excitable Geordieness. Seems like a really good laugh.

Hits and misses
No obvious clunkers in the CV, but then again, you end up doing so many odd jobs as you make your way in TV, that it wouldn’t be a surprise if she’d done a show about underwater taxidermy live from Hartlepool marina, or something which involves poking someone with a stick. You make your money where you can. The last few years have seen her profile increase markedly, as TV people finally realise that maybe having women talking to men about football isn’t just the start of a hilarious joke.

Big club bias
Clearly has a lifelong passion for Newcastle United and for that, she has all of our sympathy, but this will knock out any BCB from your football DNA. Also, doing European football is not something anyone obsessed with big clubs could do with any sort of passion, as it involves mentioning clubs you’ve never heard of from countries you can’t find on the map and players whose names you can’t even pronounce.

Loved or loathed
At this point I have to mention sex. If I was talking about a male presenter, I would rarely do so, but it’s pointless to pretend the attractiveness of a female presenter isn’t an issue of some sort. And how people look, of either gender, is inevitably an issue when you’re a huge head looking out of a 52” TV. As Lynsey has many of the attributes traditionally desired by the superficial male (yes, that is ripped off from Seinfeld) it would be remiss not to mention the fact that many have commented on this being part of her appeal and, rather patronisingly, of her success.

The thing is, there are plenty of good-looking people on TV who are just annoying because they’re poor at the job, or plain dumb and, ironically, that stops them actually being attractive (to me, at least). Lynsey is first and foremost bloody good at the talking to the camera business, does the job with a light touch and good humour and I suspect that’s why she’s popular and why she’s doing well. I hope so, anyway.

Proper Football Man
No PFM has ever been a woman – not as far as we know, anyway. Many a PFM has probably dressed as a woman for ‘banter’, or may have passionately wanted to do so to express their sensitive side after drinking brandy, but none has actually been a woman. Could Mrs Hipgrave be the first? It’s possible. Now, Lynsey is a Geordie and as such has in inbuilt, genetic capacity to swallow large quantities of alcohol, dance on tables, stagger around cobbled streets in a state of disrepair, wee in doorways and fight in Greggs over the last cheese pasty. That goes without saying. So Reidy’s rubbing alcohol and Brillo Pad juleps, poured into a bin lid from a watering can, would hold no fear. Nor would a debauched evening at a risque nightclub full of people wearing almost no clothes, largely because this is a way of life in Newcastle, as is losing your shoes and underwear and waking up on a train as it pulls into Aberdeen with only a traffic cone on your head and some fruit in your bottom. So culturally, she’s well equipped to be a PFM. Okay, she’s not a man but yer PFM likes to accommodate a token lady to prove their open-mindedness to each other, even if they do like to refer to women as a single collective unit who all think, feel, behave and react the same way. There’s only one thing in the way of PFM membership approval; not an ex-player. Sorry luv, if you’ve not done it on a wet Tuesday in February at Oldham Athletic with a big ugly centre-half up your backside, you will never be a Proper Football Man. Also, let’s face it, women don’t understand the offside rule, do they lads? Eh? Ha Ha. They all prefer shopping for handbags. #bantzgonewild

Beyond the lighted stage
Married to the bloke from Toploader, who once had a big hit, so it seems likely there’s some decent rock ‘n’ roll schmoozing to be had in the Hipgrave household. Trips to St James Park seem likely too – followed by trips to pubs to anaesthetise that peculiar pain. But apart from that, we know little of her. And that’s how it should be.