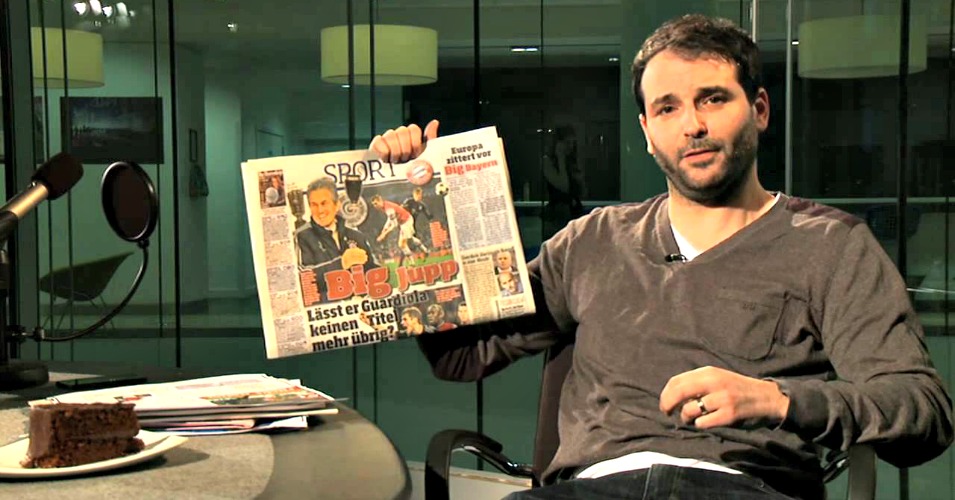 John Nicholson goes all continental this week as he dines at the smorgasbord of TV football charcuterie with Raphael Honigstein.

Fashion police
Modern but without any slavish addiction to fashion statements. Has a touch of German existentialist philosopher about him. When he opts for the all-black look with roll neck, he could pass for a mime artist. Has fluctuated over beard options ranging from non-existent, to late 80s George Michael stubble. Looks like the sort of man upon whom nature is performing her cruellest trick of covering a chap in hair, but with ever less residency on his head.

BT work is always done in an open neck shirt because, hey ties are for squares, booby cat.

Lingo bingo
One of the football writers and pundits who is employed (by ESPN, Talksport, BT Sport and The Guardian and others, as well as German newspapers) because he actually knows what he’s talking about and can articulate himself without resorting to witless cliches or meaningless football-speak. Knows a verb from an adjective and has actually done some work, in order to be interesting, informative and entertaining. In short, the very opposite of the typical ex-pro on our TV

Has bit of twinkle in the eye and you sense he’s threatening to say something that will make a sailor blush, if only to embarrass the presenter. I seem to recall James Richardson having to kick him off a Sunday show for making the self-abuse gesture, not realising that he was live on air. Brilliant.

It goes without saying that he’s talking in his second language, but you never really even notice that, so complete is his mastery of the English tongue.

Hits and misses
W*nking gesture faux pas aside, it’s hit after hit for Raphael, right now. As part of the regular team on BT Sport’s best-football-show-on-TV-by-a-country-mile The European Football Show, every Sunday he gets to talk about German and European football in a knowledgeable, informed, but never stiff or stilted way. Wrote a very interesting book on the English football narrative and has just published Das Reboot, about how the German national side reinvented itself as entertaining and successful. Is also part of the regular Guardian podcast team, which is essential listening.

When not talking on the telly he does interesting pieces for newspapers. His recent analysis on the myth of the so-called burden of playing in the Europa League on a Thursday, was of typically excellent quality.

At his most entertaining when put up against a blow hard, of whom there are many in British media, who relies on football’s group-thinking hive mind for uninformed and factually incorrect opinion. The gulf between those two worlds is the grit to make a really interesting pearl.

Big club bias
Any journalist has to spend a lot of time covering big clubs because that’s where you find your biggest audience, but true BCB is really the province of the narrow and shallow and RH ain’t that.

Loved or loathed
Perhaps more than most, he illustrates the basic divide in the contemporary world of football consumerism. Thoroughly post-modern, in that he understands the football media cliches and cultural archetypes, and yet not lacking in joy or understanding of the game. So to those of us who crave football opinion and insight delivered with a degree of intellect and charm, he is one of a new breed of football telly (and radio) heroes.

However, you can see why the football tourist or worst tabloid hack whose job is to redux complex, nuanced notions to words of four letters or less, would hate someone like him. RH represents the colonisation of football media by Clever People and they don’t like that because it might show them up as lazy, bigoted, misinformed thickos, so get back in the library, Pointdexter, eh?

Proper Football Man
Obviously, no mere scribbler is a PFM. If you’ve not stuck your thumb up a centre-halves’ backside on a cold afternoon at Selhurst Park you can never be a PFM. Also, the actual ability to write, clearly triggers a PFM exclusion clause. You want to sit in your house writing rather than shouting loudly in a pub while setting light to a friend’s clothing? What sort of wuss are you?

And clearly, any knowledge of PFM culture will tell you that a Bavarian could never be allowed into their ranks due to being, well, foreign (where is Bavaria, Jeff?)

And yet they might look a little wistfully at Raphael because the PFMs, with their fondness for bierkellers, admire the Germans for being serial winners. Your PFM is also fond of a suede car coat, so also appreciates the Germanic love of animal skin clothing and he also appreciates their top quality 1970s pornography, upon which so many PFMs base both their fashion sense and sexual politics.

But every PFM knows that a German’s only true role in their life is to be nicknamed ‘Der Kaiser’, abused about the 1966 World Cup and to be subjected to over-heated arguments which end with the PFM yelling “who won the bloody war, anyway?!”. It’s just classic banter, Jeff.

Also counting against him being granted even a PFM associate status is the fact he’s on BT Sport which, to the PFM, (even the ones who also work on the channel) is the equivalent of the Open University, and that means he’s just too smart. You certainly can’t trust him to keep quiet about that business with the ladyboy stripper in Oldham and at the end of the day, Merse, he’s sitting in a seat that could be occupied by an ex-player. No, not for me, Clive. I’m not ‘avin’ Adolf….whatsisname?

To add insult to injury, it seems very unlikely that he’ll papped at 4am coming out of a nightclub in Penistone called Brown Eyes with Miss South Yorkshire Budget Lager Body 1987, nor would be able, or even willing, to drink one of Reidy’s foaming steins of liquid gas, cream and fermented mice, whilst singing vulgar songs on the back seat of a coach on the A57. His lack of inclination for humour derived from an abandoned shopping trolley and his unwillingness to accept or tolerate crude national stereotyping would enrage any true PFM. Membership form not just declined, but burnt in a wicker man.

Beyond the lighted stage
Presumably spends time out of TV and radio studio just sitting and writing. Little known about his cultural hinterland but I would hope it involves listening to albums by Kraan and Amon Duul II.