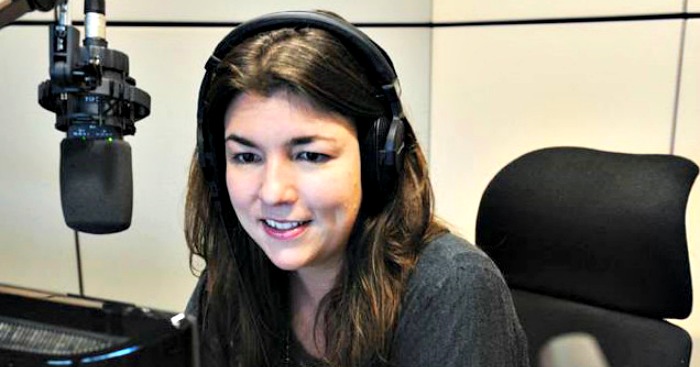 This week Johnny goes back to his favourite medium and listens to Caroline Barker on the radio.

Fashion police
Caroline does a bit of TV presenting but currently works mostly on the radio which, once upon a time, not so long ago, meant you could turn up to work in a see-thru baby doll nightie, a pair of wellies, and with a carrot stuck up your arse and no-one would be able to judge you harshly. It’s certainly how I still dress for radio broadcasts. Some traditions are worth saving.

However, on the BBC and elsewhere, there is now the ubiquitous webcam undressing you with its all-seeing eye. For some reason, radio stations think the public want to watch radio people presenting radio shows. An odd concept, because it’s just someone sitting in a chair with a microphone and thus hardly riveting watching. But the unstructured suit brigade with the brightly coloured comedy glasses probably have a focus group to prove we want it. So these days, while you will still be judged less harshly for your appearance than a TV talker, gone are the days that you can turn up naked except for a bottle of champagne – unless you work on talkSPORT, of course.

Research shows CB is a cheerful, rosy-cheeked, squirrelish woman, with a fondness for what I call clothes-clothes. In essence it means wearing clothes that are there largely to do a practical job and much less express any sort of style. Plain t-shirts, tops and jumpers all get you through the day just as well as a brocade waistcoat, silk shirt and top hat. Better, in fact. Clothes-clothes are the only sensible choice for people with more interesting things to do with their lives than look in a mirror, regardless of how attractive they are. As a man who long ago realised that I could make a suit made from spun gold look like a shapeless Brillo pad, it is a way of life I heartily embrace.

Her hair is of the don’t-have-to-do-much-to-it-to-make-it-look-decent variety. Again, this is a good, sensible, low-stress option. Never understood people who have to faff around for an hour every morning primping at themselves. Life is too short for a primp. When I was a teenager, me and my pals invented a concept: the periods and farts girl. The P & F was a natural lass who wasn’t caught up with the girly-girly, heels-for-feels world, where girls were slaves to make-up and glamour. Instead they just relied on being interesting people in order to be attractive. And they were. We loved the P & F.

Online pictures of Caroline seem to radiate positive energy and fun, which is a rare and an extremely welcome quality in this world of tears. God knows we all need some sugar to take the edge off our bitterness.

Lingo Bingo
An Essex girl but not in the white stilettos, weird orangey coloured “wossmatta, Trace, ya look a bit dan in the maff,” sort of way. Hails from Chelmsford, still the only town in Britain where I have literally walked into Phil Collins and then seen David Icke in a Deep Pan Pizza. Strange county, Essex. The rural bits, very different from the towns. Seems to contain people who sound like kneez-up geezer Danny Dyer-type cockneys who might call women “treacle” or “princess” and declare it to be “taters” when the weather is a bit chilly. And others who sound more like ooh arr Suffolk farmers.

Anyway, Caroline has an ideal radio voice: a lovely rich, dark brown purr which caresses the ears. You can be as knowledgeable as you like on the radio, but if you speak in a voice that sounds like an amplified goat and feels like a hot needle is being jabbed in your eardrum, your wisdom will be lost as the listener scrabbles for the mute button.

She’s always quick to make a joke and pushes the programmes along with a bonhomie which suggests she’s having a great time. Laugh a lot.

Hits and misses
Lots of hits.

For a start, she’s one of 5live’s regular quartet of stellar broadcasters, week-in-week-out. Along with Kelly Cates and Mark’s Chapman and Pougatch, she is part of a formidable presenting line-up who can always be relied on to bring the football to us with a relaxed mix of informality, knowledge and fun. Seriously, if you don’t listen to 5live after 7pm on a regular basis, you really are missing out on some absolute gold. This is a great era for such broadcasting.

But presenting these gigs is, I reckon, deceptively hard work, You have to pull so many strings, go in and out of so many clips, interviews and reports, often while standing pitchside next to an ex-professional making faces at you, or cramped up in a tiny commentary area with the rain lashing in your face while some corpulent commentator crams a burger into their face while you’re trying to do a serious bit. And you have to do it all without so much as a pause to wonder what’s going on. All of them are brilliant at it.

This week CB was doing the FA Cup from the Lincoln City v Ipswich game. An extremely knowledgeable and passionate supporter of non-league football (she is the founder and host of The Non League Football Show), she was in her element, in a way that you just can’t fake. The noise and energy and sheer rootsy vibe of such community football occasions was brought to the fore by her unfiltered passion for it. As an ex-director of Chelmsford City, she knew what this occasion meant for a club like Lincoln City, both in financial and sporting terms. This is where football stops being an extension of corporate marketing and becomes something that flares your nostrils with civic pride. A million miles from the ridiculous soap opera of the Premier League, she made it all feel so exciting. The whole programme was an absolute triumph: both exciting and joyous.

Other major hits include doing work on the World Service and for Kick It Out. Has presented on telly and radio for at least 12 years now. Is also at home covering other sports. I think she does Sky’s Netball show, which I’ve never seen, much to my chagrin. It’s impossible to keep up with everything.

Had a superb World Cup working for 5live, full of verve and good humour. And last but not least, has been a top performer on Fighting Talk.

No recorded misses so far. Seems to be the very definition of a safe pair of hands, but with none of the usual slightly dull connotations that expression implies.

Big club bias
Oh my word no. A big non-league fan. As this week’s work at Lincoln well proved, the bright lights are clearly irrelevant to her. And rightly so.

Loved or loathed?
When I did my usual social media research, as ever when it comes to radio people, the response was quite low volume. I’d like to know the listener figures per 5live show but haven’t found them yet. I assume that, compared to TV, the numbers are small. But those who do know her absolutely love her work.

‘She knows better than anyone what pushes non-league fans’ buttons. She makes pretty average pundits into good ones, too.’

‘Can’t comment on her day job but always enjoy here contributions on FT. Sounds like she’d be great company…’

‘Great on fighting talk, knowledgeable & clever, one of the new wave of talented women forging a path in sporting broadcasting.’

‘Embarrassed to say I don’t actually know who she is. Looking forward to finding out, though.’

‘She’s a force of nature and knowledgeable with it.’

‘Used to enjoy her on the Non League Show. Anything highlighting non league gets a thumbs up from me.’

‘I feel awful but can’t think who she is. Please don’t judge me.’

‘Ace, ace ace. Great on fighting talk, and was director of my home town football club for a bit, which must’ve been depressing.’

Proper Football Man?
The self-confident woman scares all PFMs who often prefer the company of emotionally vulnerable women who are drunk on Lambrini instead. But they would find her non-league knowledge curiously fascinating.

No she’s not really a bloke, Chunky, so put your leather trousers back on and stop drinking that bottle of Joop.

But she has been a director of a football club, and the boys like anyone with access to a director’s executive bathroom, if only to emerge from it saying “I’d give it 10 lads” before laughing too loudly and hitting someone on the top of their arm, very hard.

But to be a Proper Football Man requires a very specific set of genitalia and it wouldn’t be long before the boys would tire of the exotic pleasures of a woman who knows about football, and the old sexist, misogynistic collective would re-exert itself on a trip to the Shaven Maven casino, strip club and hardware retail outlet, for a night on the WD40 and hallucinogenic toad daiquiris with Miss Broom Shank ‘n’ Stiff Brush Body of 1987.

This trend for the women to do the football has gone too far, lads. Gerrin’ lasses on the radio and telly what know stuff is a step too far. It’s taking jobs from lads that need money for nothing and chicks for free. Fair enough luv, you’ve had your fun, but now let the lads take over, at least for the lads football. You go and do the girls kicky kicky.  I mean have you ever had to grab the balls of a centre forward on a cold February night in Southend? You have? I love you. How much for that, like? Ow, that hurt.

Beyond the lighted stage
Has done great work for Kick It Out for some time now. Hosts a lot of charity events too. Is director of content at JibbaJabba. Along with the non-league football and media work it all points to a rounded human with a cultural hinterland, and one whose innate talent is a huge asset to 5live.