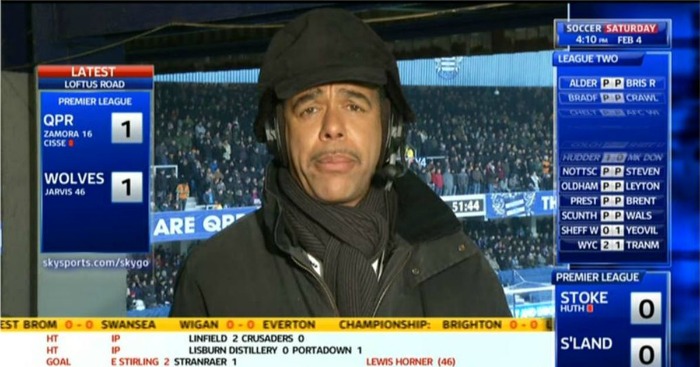 This week, Johnny watches Kammy on the telly and thinks he really is unbelievable, Jeff.

Fashion police
Appearance is defined by the unchanging hair and signature felt-tip line ‘tache which, whether you like it or not, must be really sodding hard work to trim, shape and maintain.

Clothes are pleasingly modest and masculine. Likes a stern overcoat and well-cut suit. A trim, well-turned out lad who looks considerably younger than his 58 years. Looks oddly naked when seen without large pair of headphones hugging his bonce.

Also, and perhaps weirdly, he looks great as a woman. Now that really is unbelievable, Jeff.

Lingo Bingo
Famously a native son of Middlesbrough. Though he’s lived away from the region for many years, there is still a trace of the elongated vowel sounds that define the Teesside voice. Easily rises to a slightly hysterical squeak at little provocation, and has one of those infectious laughs which make you want to join in the fun. No Saturday is complete without at least one Kammy breakdown, caused by a malapropism or some other silly mistake. Brilliant.

One of those people who talks a strangely garbled version of English which is eminently understandably but which, on paper, makes no sense, as these 10 examples from Sabotage Times prove. It’s all poetry.

“The atmosphere here is thick and fast.”

“Karl Henry’s been sent off for a deliberate red card.”

“He had it on a plate, he had the sausage, bacon and eggs on it as well, but he couldn’t take it.”

“Alex McLeish has just had his hands in his head.”

“Tense and nervous are not the words, though they are the words.”

“For Burnley to win they are going to have to score.”

“They’ve one man to thank for that goal, Alan Shearer. And they’ve also got to thank referee Alan Wilkie.”

“Is it still called Calcutta? I thought it was Bombay these days.”

Hits and misses
It’s all hit after hit for Kammy.

He’s a very long-serving denizen of Sky now with 17 notches on his microphone. So many have come and gone, and he’s still there. He’s become such a part of our football furniture, delivering live reports from the crowd, as the action plays out off-camera behind him, that we forget he practically invented this as A Thing. While live audio reports from the grounds were common, cutting to a live reporter wasn’t done until Soccer Saturday came along. Now, it all seems commonplace, but it was Kammy who led the way. He’s quite genuinely an innovator.

Other hits include stumbling over words and accidentally inventing odd phrases and occasionally missing a sending-off entirely. His slightly wild, confused look, breaking down into laughter as he turns away and back to the camera, away and back, away and back, is a weekly highlight of our lives.

Is one of the few media people who has managed to establish a single word, ‘unbelievable’, as a kind of personal trademark.

Has also been doing Goals on Sunday for 16 years now where he gets to show off his analytical skills and football understanding, both of which are top notch. Because of his easy-going nature this gets overlooked in the pundit reviews, but he’s as good as anyone at dissecting play in this environment.

Kammy has probably established a unique football role for himself, which is to straddle entertainment and expertise. It might have just evolved out of his nature, but fair play to him for turning it into a career. He stands alone in this regard.

Recently started doing some very odd adverts alongside Coisty which have rather divided opinion, but which speak to his fun nature. And this one for Ladbrokes is a mind blow. He’s actually very good in it. Nice big arse in them shorts, Jeff. I tell you what, Merse, I bloody would, you know.

And who can blame him for filling his boots with sweet, sweet advertising moolah at this point in his career?

Big club bias
None at all. Coming from Middlesbrough, which is the least pretentious, least elitist, least regarding of anyone who thinks they’re “it” place in the country, as well as being grounded in a solid journeyman career, years of analysing lower-league games and a general passion for football wherever it is played between whoever, means BCB isn’t in his DNA.

Loved or loathed?
A genuinely lovely and just really, really decent man, Chris is easily one of the most loved of our football telly people, possibly the most loved, in fact.

Loved because he makes us smile, because he’s having a good time, because he has a passion for his job, because he cocks things up, because he is thoroughly unpretentious. We all need more joy in our lives these days and Kammy delivers it to us without fail every weekend. When he gets things wrong it only endears him to us more, as this selection of highlights well proves…

And as if that wasn’t enough proof of his brilliance, in Rio for the World Cup he chased down and caught a robber. And what did Kammy Tweet? ‘Not lost me pace!!! I just caught this street robber. Done in now though.’

Crime-fighting delivered via self-deprecating football vocabulary. Brilliant. If that doesn’t glaze your eye with a tear of humanity, nothing will. The man is a 100% stone-cold solid star. His combination of instinct to do the right thing mixed with bravery and humour is a shining example to all of us.

Later he Tweeted to say. ‘Giving my statement now: “well I ran after him & caught him”, before tweeting ‘Have to go to the station to write it down!!!! I am on me holidays’.

It’s a kind of love poetry. What a man. What we Teessiders might call Proper Boro.

I hope he knows just how well-regarded he is. My social media research pulled back a thin veil of a megatonne of Kammy love. This is just a small selection of the comments I received.

‘The most infectious of laughter, talks bollocks but I do not care at all. Love him’

‘Nice to see someone in a job who knows how lucky they are to be doing their job and enjoys doing it.’

‘He knows that he’s a clown, so he doesn’t wear that sense of entitlement like many others. Doesn’t take life too seriously.’

‘Genuinely think he’s great and earning as much while he an as he knows it’s all fleeting.’

‘On my holidays, he once held the lift door open for me in a Cypriot hotel lobby, therefore he is a gent of the highest order.’

‘Wonderful charitable man, yes he’s a comedian on the tv, never fails to bring others into convo, forcing opinions.’

‘Bumped into him whilst on the piss in ‘Boro after an England match. Had him in a drunken headlock. He embraced it. Total gent!’

Proper Football Man
Well yeah, but also sort of, no. He’s one of a rare breed is Kammy. Everybody loves him, from the bearded tactics hipster, to the manspreading, Blue Stratos drinking, tightly-cardiganed alpha male PFM. He works on Sky, the PFM’s favourite channel. An ex-navy man, who served Queen and country, he became a no-nonsense defender from the north who toured the lower leagues inflicting pain via his feet, eventually rising to play in the top flight. That’s a CV guaranteed to get any PFM purring.

Better yet, in 1985, Kammy became the first footballer to be arrested and convicted for GBH after breaking a Shrewsbury Town player’s cheekbone with a single punch, at the end of the game. Mmm, nice. It’s a man’s game, Mark. No need for the police to be involved. It’s all just banter, officer. I hardly touched him. It’s a soft one, if you ask me. He’s gone down very easy, there. The continentals have brought that into our game, Clive. You wouldn’t catch the nancy boy modern players doing that these days. They’d probably get their butler to do it.

Kammy is always up for sofa-based banter. He’ll squeeze and shake your leg as soon as look at you and he can end a sentence with the word Jeff, as professionally as anyone, Jeff.

Seems almost incapable of not rubbing along well with everyone and that should not be underestimated as an art in itself. Being a grumpy sod is easy, being the good vibes man is far harder because there simply must be times when you just don’t feel up for it.

However, he does all of this without the vague whiff of chippy xenophobia that is the PFM’s stock in trade and which they would normally be suspicious of, fearing that they’ve got a book-reading, liberal PC bedwetter in their midst. This is how, without really trying, he manages to be everyone’s friend.

Would certainly be prepared to have an apres drinks, shopping trolley race around an abandoned retail park, or a drunken hip-hop dance-off, and at some point has almost certainly ruined some of his internal organs trying to keep up with Reidy on the fermented lites, nail polish and Mr Sheen cocktails. Seems too much of a happily married gentleman to be interested in the be-thonged favours of an inebriated Miss West Yorkshire Meat Paste and Boiled Offal Products 1982 on a night out in infamously louche Wakefield club the Clown’s Pocket.

Beyond the lighted stage
Is increasingly involved in programmes outside of football, featuring in nine shows already in 2016, including Have I Got News For You, and the not to be missed Celebrity Storage Hunters, in which people search for somewhere to store their celebrities.

Good mates with old school friend and Boro chairman Steve Gibson. Having been subjected to regular racist abuse during his upbringing in Middlesbrough, and later as a player, he has done a lot of work in combating racism, being inducted into the Show Racism the Red Card Hall of Fame in 2004.

Actually recorded the official England single for Euro 2012 called Sing 4 England! Does anybody even remember that?

In December 2011 he was awarded ‘The Above & Beyond in Memory of Sir Bill Cotton award’ for his contributions to Marie Curie Cancer Care. He and a team of Football League ambassadors, including Brendan Rodgers, Aidy Boothroyd and Gibson raised £385,000 for the charity, climbing to the peak of Mount Kilimanjaro. As well as being an Ambassador for Marie Curie Cancer Care, Chris became an Ambassador of the Special Olympics Great Britain Organisation in April 2011 after taking part in the Special Olympics Unity Cup as a celebrity partner before the Germany v Argentina quarter-final match in Cape Town, during the 2010 FIFA World Cup.

A genuinely lovely fella. And I don’t just say that because he once tweeted a picture of himself reading my novel, Teesside Steal, on a train.