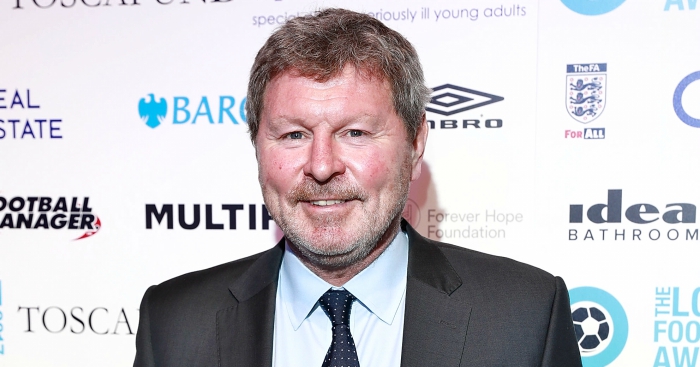 Fashion police
Has always taken the sensible option to never adopt any sort of style or image. Since his days as a young player at QPR, his hair has merely existed without obvious care or attention. Often forgotten that he signed for Arsenal for a club-record £1.25 million back when £1.25 million really was £1.25 million and not the £37.98 it is today. Never played a game for them before getting shipped out to Palace within 62 days, but did sport a fine example of bird’s nest hair at the time, or is it a trilby woven out of hair?

Sadly too sensible to even indulge in an 80s mullet which is an opportunity missed in any man’s life.

These days, as one contributor pointed out, he resembles a handcrafted, artisanal scotch egg.

Lingo Bingo
From the deep, deep east end, as Danny Dyer would have it, as though it’s the Congo and not just Stepney. Close your eyes and he sometimes almost sounds like ‘Arry from Poplar, about three-and-a-half miles away, only slightly less barrow boy.

It’s funny how old-fashioned the 50-something Londoner sounds. All the modern influences of rising inflections, Australian and Caribbean adoptions are entirely absent, and it’s pleasing that he’s not absorbed any of these. Thankfully, will never start every sentence with “so”. The result is an almost comforting ‘proper’ accent.

Once said of Arsene Wenger  “He’s two-bob, he is,” after a game, because he wouldn’t shake his hand, which is fabulously arcane cockney rhyming slang and, as such, belongs in an early episode of Dixon of Dock Green.

By contrast, his co-comms tend to be very even-tempered, lacking in faux outrage, unreasonable barfing and there’s no shouting being proffered as wisdom. But definitely has some inner steel.

Hits and misses
Wide-ranging successful playing career. Had one stand-out season at Spurs, scoring 49 in all competitions, which is an amazing achievement. Was a goal every two games striker overall, but even so, he only won five England caps. The feeling that all he did was score goals was commonplace. Got his first cap in the Maracana against Brazil, in the game where John Barnes scored THAT goal. Bobby Robson never really found a place for him, and he did drift around a lot, playing for 11 clubs in 17 years, including a season at Bordeaux, which is abroad in Frenchland, Jeff. He even finished off his career playing three games for Carlisle, as though he wanted to get as far away from London as possible. Why would you do that, Jeff? I mean, no disrespect but it’s Carlisle which is technically on the moon. Or that’s what Chaz told me..

Comes from a huge footballing dynasty. Father, uncle, brothers, two cousins and son all played professionally. Clive himself was born at 3pm on a Saturday afternoon, which seems to have absolutely guaranteed his destiny.

Since retiring he’s worked at Tottenham as a coach, filling in as caretaker manager twice, and has been a constant presence in the media. He was on the early Soccer Saturday panel alongside Rodney Marsh, Frank McLintock and George Best.

So Clive has always been around. In fact, he must have the best part of 20 years’ worth of hacking at the pundit coalface now, but has never really reached the top division of sofa-dwellers or co-comms. Even now people don’t even know he works regularly on TV and radio. He’s often to be found on a Thursday night doing Spurs Europa League games on the TV, but just doesn’t have a high profile, possibly due to not having an expensive haircut and a predilection for passing off stupidity as fun. Also crops up on 5live occasionally. I’m never not happy to hear him when he does.

Seems the very definition of ‘steady’ and that must explain the regularity of his bookings over the years.

Lynsey Hipgrave tweeted me to say our Clive is, “one of the nicest of men to work with”. And, as I have lived with a Geordie woman for 36 years, I have been well-trained to never, ever, ever, go against Newcastle’s females. No good ever comes of it and much between-the-legs pain is a more typical outcome.

And I think that Lynsey’s words really ring true. You wouldn’t be fearful of taking Clive home to meet the parents. There’d be no hogging the chocolate hob nobs, no risque jokes, no effin’ n jeffin’ when your mam’s pouring the PG Tips. I bet he was one of those boys of whom one’s own parents would say, after you’d been caught doing something rude with the girl next door “why can’t you be more like that nice Clive Allen, lad?”

Someone who has worked with the man many times got in touch with this fantastic insight.

“Really nice bloke and actually, what he says on co-commentator duty is usually pretty good, but no-one ever really remembers what he says, because, rather like his playing days he just does it/just says it. As a player…he just really scored goals, as a co-comm he just says it, but without the element of controversy or hyperbole or self importance that others do.

“The fact that he is still working in TV/radio a long time after he started, means that he is rated by those who book the ‘talent’. (However) he can’t say Cagliari…never got it correct, not once! I am always quite happy if Clive is with me. Also, I remember giving him a lift to the nearest tube station in my little car after one match. No airs and graces, Clive was getting the tube home, hence no sense of grandiosity.”

Big club bias
Seems happy to do whatever work comes along. Loves his Spurs, natch. Not overly fond of the other north London mob, which is perfectly understandable, all things considered.

Loved or loathed?
Pretty much the worst thing anyone had to say about Clive was that they didn’t realise he was ever on the TV and radio. This at least means he doesn’t annoy or make you grind your teeth and wonder what sort of idiot has employed this hot air barfer. Not everyone has to be an overbearing star, or a ‘character’. It really is perfectly acceptable to just be good at the job and go home, not having stirred up any controversy.

‘He shaved his head after his hair fell out in great clumps, then went on telly totally bald. It grew back.’

‘Clive’s refusal to go along with his colleague’s pronunciation of Dzeko tonight has been admirable.’

‘Reckon people say “for me Clive” to him a lot, and he never finds it funny.’

‘I have absolutely no idea who this is and I was too embarrassed last week to say.’

‘I always thought his face looked like it was emerging from a crack in a large tennis ball.’

‘Did not know he did football on the telly, but I’ll take your word for it.’

‘I can’t remember the last time he was on telly though.’

‘Saw him at Luton Airport once, played for nearly every London club, pronounces Cazorla “Corzola”.’

‘I had to Google him to remind me what he looked and sounded like.’

‘Sat behind him once at Spurs reserves, voice went down 2 octaves and very scary when angry at the ref.’

‘Reliable but dull. Never gets the big game.’

‘As a commentator has done nothing wrong but extremely forgettable.’

‘He’s called Clive. Therefore he is the life and soul of the office party, and cries himself to sleep at night.’

‘Might be too old a reference but if a spitting image character, more like John Major than most co-comms.’

‘He’s left holding the jackets when it kicks off.’

‘Was part of the Soccer Saturday glory years of Best, Marsh, McLintock and Clive Allen sat on the end.’

‘He hasn’t got the most exciting voice and the Spurs Europa games he commentates on are usually just as exciting.’

‘Could have been a librarian.’

‘He strikes me as a decent guy who would get more media gigs if he was more controversial. Ray Wilkins with hair.’

Proper Football Man
Every gang of emotionally stunted alpha males needs a nice boy who they can send into the off licence to buy them cider and ciggies. Clive is that man. He’s got plenty of credentials to impress the boys, including being on Soccer Saturday, which is the nearest thing the PFMs have to Holy Mass. And he worked under ‘Arry at Spurs which is like being one of the disciples to ‘Arry’s Jesus, and he’d be one of the top, top disciples too, Jeff, like Simon the Zealot; he was class that lad. I love a zealot, me.

Has a cousin, Mad Dog, who is the PFM’s idea of Proper, which is to say he might bite the head off a bat and drink brandy from the bottle, whilst beating a foreign lad with a wooden stool in a bar fight.

Given his background, he certainly seems familiar with the PFM well of cultural and sporting assumptions, but hasn’t drank so deeply from their well of chippy bitterness and despair.

The boys are a bit worried that he played in France for a year, backs against the wall. Is pizza really foreign, Jeff? Yeah? Next you’ll be telling me tea isn’t English. He also played American Football for a season which is virtually treason.

Still, has thickened out in a pleasingly middle-aged manner and now look physically capable of handling one of these…err…hang on, Reidy, what’s this? Dear me, my eyebrows are on fire. You’ve not started up the rat milk, Dulux magnolia and DDT operation again, have you? I had to give the rozzers 100 season tickets to get you off last time. Mind, it is a fine brew. Mmm, coats the throat nicely even if it does make all your pubic hair drop out. That’s all the rage now, isn’t it, Chunky? No I don’t want to see the last pig’s trotter in the butchers, thank you.

Beyond the lighted stage
Had a go at the American Football as a Specialist Kicker, which sounds more like the nickname of a hooligan who demolished trains in the 70s. Supports the Sporting Memories Network. Takes part in the Arsenal v Spurs golf days for Bob Wilson’s Willow charity.

Very few cultural interests on display. Unusually, no evidence of being interested in the Japanese heavy metal of Earthshaker, the cross-hatching of Robert Crumb or the beat poetry of Diane di Prima.

Conclusion? People who work with him think he’s great. His grounded lack of grandstanding and ego-fuelled me-me-me has meant many viewers and listeners blank him, or mistake his anonymity for inadequacy. Nothing could be further from the truth. Clive is one of best co-comms you think you’ve never heard, and we all need a good solid Clive in our life.