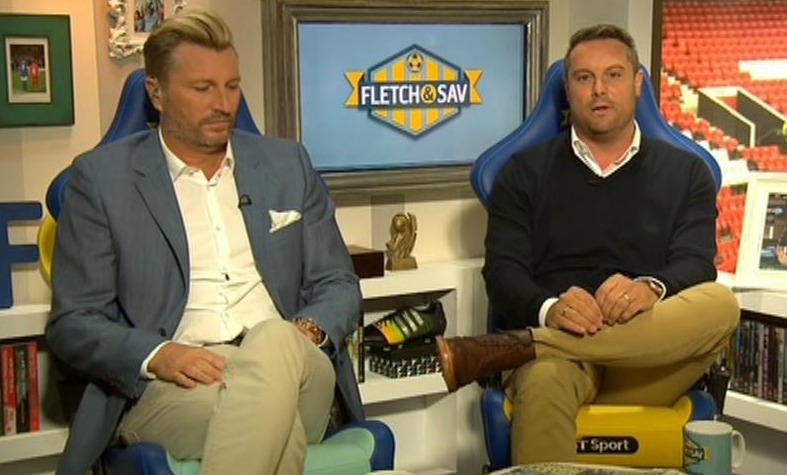 This week John Nicholson wonders whether Darren Fletcher is biting his tongue for the good of his career and will he get the keys to the secret PFM wet bar?

Fashion police
For most of his career to date he was behind the microphone on the radio – a job you can do whilst wrapped in a tarpaulin or wearing a gimp mask, and no-one at home will judge you for it. Recently has emerged from that cocoon like a slightly arsy butterfly onto our TV screens via his BT Sport gig as both commentator and as half of the Fletch and Sav behemoth.

Having to sit next to the radioactively tanned, hyper-coiffured Welshman, there’s no point in trying to compete on the fashion stakes, so Darren opts for the smart-casual look purchased from Next or similar. There’s a touch of fashion, but not enough to trouble the scorers. Plain shirts are worn open-necked, jackets are dark. Likes a brown boot or black shoe and a dark woolly pully or even one of those tighty-tight cardigans. Sports, what used to be known as, for no good reason at all, ‘designer stubble’, in the George Michael ‘Faith’ era style. Thankfully hasn’t gone down the hand-crafted coffee shop curator beard route and one hopes he feels almost violently critical of those who have. Would look quite bad ass if he went skinhead or had a buzz cut.

Lingo bingo
Has the gruff flat tones of the northerner, but actually hails from Nottingham, which seems trapped in a kind of geographic limbo, being never quite northern and yet never quite the midlands, either. What is a Nottingham, Jeff? Occasionally deploys impressive levels of indignation and grumpiness during commentaries. Often feels like he’s having to bite his tongue from making a libelous gaff. Off air, would definitely call a spade a f**king sh*t shovel. The feeling that he might give you a stiff right-hander on the cobbles at chucking out time after half a bottle of brandy and five pints of bitter, is ever-present. This may be why I like him so much.

Hits and misses
After a lengthy, solid career on the BBC, made the leap into TV work pretty seamlessly and with no discernible change of style. There’s never been any doubt that he was a good mic man, and was never one to pull any punches. Does the work with some passion. Never comes across as a media luv, either. All good traits. Also does much-appreciated NFL work, with his ‘A Week With The Cheeseheads’ doco, especially well-received. And has had a boxing gig alongside the always good value Steve Bunce, with whom he shares a punchy attitude.

Pleasingly, his star seems to be in the ascendancy at BT and the Fletch and Sav show occupies an important pre-live game slot. It gets the full BT pump-uppage too.

Apparently they got 44,000 viewers back in the spring of 2015 and have been doing even better recently, so is considered to be a big hit, by the standards of such channels. But it don’t seem much tho’, do it?

However, it seems likely that the show will become something of a fixture – a modern-day Saint and Greavsie, perhaps. The intention is clearly to create a brand. They certainly pull in some big football names to sit in what seems to be a portable recreation of a 14-year-old boy’s bedroom.

Clearly plays the straight man in the partnership and seems remarkably relaxed doing live TV, which is a pre-requisite for such a show. Has the doubtfully arched eyebrows of a man who does cynical very well and pished off, even better.

Obviously, the appeal of the show relies on the viewer buying into the matey, changing room, towel-flicking style of bantersaurusing between the presenters and guests. If being in the presence of such alpha maleness makes you want to run away screaming clutching a book of love poetry, this just ain’t your gig. If you’re looking for anything highbrow, then you’re looking in the wrong place. It’s all quite laddish (though without deploying the full heinous Lovejoyishness) and I guess that has its place simply because it is the majority culture. Not everyone wants their football delivered by highbrow cultural analysts, or in words of more than two syllables. A lot just want some shouting, some loud laughing and to see people they’ve heard of talking in cliches and using ‘them’ instead of ‘those’. Seriously, they do, and them people need TV programmes too, Clive.

It’s always going to be divisive because Savage is so distinctive, but then that’s the point. They’re trying to create something with its own flavour and, by and large, I’d much rather that was the case, regardless of personal taste.

The degree of promo the Fletch and Sav offering gets suggests BT regard it very highly, so he’s got a big hit going there and fair play for that, because getting any purchase in this market is very difficult.

But their Saturday night 5live 606 pairing, where the BT gig came from, is less successful. This is largely because phone-ins seem so old hat, and the quality of the calls are at an all-time low standard, often to the point where you feel like you’re wasting brain cells listening. Some callers seem either over, or under, medicated. And not in a good way. Also the sonic aesthetics of the programme can be, at times, almost painful.

Does well not to occasionally lamp his co-host.

Big club bias
Nothing noticeable. Seems the sort to take pleasure in being down-to-earth and very much not in any way grand.

Loved or loathed
As a commentator it is easy to be anonymous and hard to be distinctive, without resorting to annoying ticks and idiosyncrasies. I’ve always thought Darren walked that line very well and research suggests a lot of love for his commentary work. An equally common view is that his talents are being severely diminished as part of a double act and that he’s trying too hard to be one of the lads. My social media research came up with this time and again. ‘Tries too hard to be blokey’ is typical.

Even the ‘Fletch’ nickname seems to endorse that, as though trying to be part of the culture infantilisation which often seems endemic to British professional footballers.

As I say, the Fletch and Sav programme is divisive and deliberately so. That is the latter’s stock in trade, even though ironically he’s at his best and most affecting when seeking consensus. You can’t say there’s no rapport or chemistry between the two of them, but it’s an oft-voiced view that it’s all rather forced on Darren’s part and that it’s not really his sort of thing. Impossible to tell for sure. One thing is certain, he’s the only man that straddles the three wild horses of hosting radio phone-ins, presenting TV shows and doing commentary. That at least shows his adaptability and there is a lot of goodwill towards him, despite widespread antipathy to the TV show and the familiar roster of guests.

Proper Football Man
Is he one of us? No. He’s a media man, never played the game, never been up a striker’s backside on a sleety night in Oldham. So, no key to the PFM private wet bar for you, Darren. Sorry, son, but we need to maintain standards.

But he’s alright is Darren and every PFM needs a media representative doesn’t he, Andy? Someone who can be trusted not to tell tales out of school and who will not exploit the fact that you said them things about that woman and the ping pong ball and it was only a bit of banter and how was I to know she was a bloke, Keysie? Am I going to jail again, Jeff?

A lot of PFMs find themselves in that funny little faux bedroom with Fletch and Sav and it’s a show with a lot of knowingly self-deprecating references to your own career which are, in reality, passive-aggressive ways to say you were actually really great. That is very much the PFM’s stock in trade because all PFMs have a very high level of self-regard, matched only by paranoia that they’ve never really been appreciated.

So they like him and what he does. There’s lots of loud laughing and over-reverence towards anyone who is a footballer and the PFM loves all of that. There are jokes to be made about Robbie’s clothes and the PFM loves a joke about an easy target, especially one that’s been made a thousand times before. There are rarely, if ever any women present and that certainly makes the boys relax and I never touched her anyway, Clive. For me, she’s gone down very easy, there.

Being on BT Sport is all a little too modern and a decent PFM will also take no notice of phone-ins because he hates the public if they disagree with him, because they’ve not played the game, Gary. But the unpretty Fletch passes the important alpha male Not-Like-Olivier-Giroud test by having a square, solid-looking head that looks well-equipped to stick the nut on someone. The PFMs love a headbutt, especially outside a nightclub, or when out drinking with their fathers.

There is a hint of the sculpted eyebrow about him which makes some of the older PFMs feel a bit queasy but he looks like he’s built out of enough potato, snot and gristle to handle several of Reidy’s new brand of tarmac, wood alcohol and super glue, lung-burning vapes and would welcome an overnight stay on one of his abandoned farm vehicles of dissolution, after being papped coming out of Pudendas at 4.27am with Miss East Midlands Budget Underwear Gusset Seamstress of the Year 1989.

All in all, while proper football men resent anyone who is on the TV, except themselves, as long as the presenter bends the knee to them and accepts the PFM knows everything and the media man knows nothing, they’ll get along fine because, at the end of the day, Jeff, I’ve been in dressing rooms and that’s why I know about football and them that hasn’t don’t know nuffink.

Provisional honorary PFM membership granted, pending passing the pushing-TC-in-an-abandoned-shopping-trolley exam in a windswept retail park in Penistone and evidence of at least one unsavoury incident in a Dubai hotel involving a sixth former. She looked 25, honest. Here’s a couple of season tickets, officer.

Beyond the lighted stage
No evidence of a life beyond sport. So much so that on Thursday night he was doing the basketball on BT Sport, which is a very deep cut on the sports limited edition, long since deleted triple live album. On time off probably just lies down in darkened room and tries to wipe Sav’s latest garish clothing choice from his synapses.