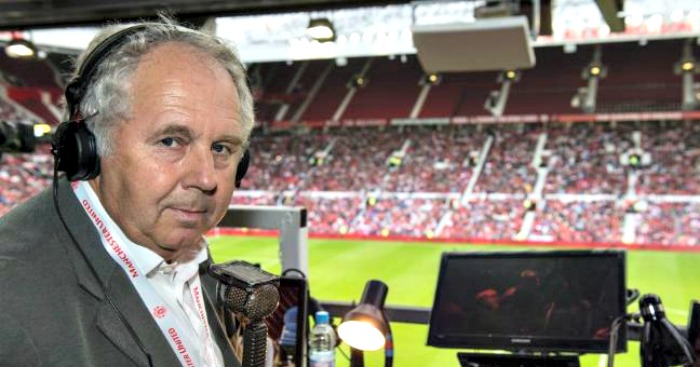 This week Johnny listens to someone who is anonymous to many, but has a voice we all know, even if many don’t recognise his name

Fashion police
I’d wager most of us have no idea what Ian looks like, despite his being such a familiar voice. In fact, I think many would know the voice and not even the name. That’s the best of all worlds. You’re high profile and doing big gigs, but you’re totally anonymous, so no-one hassles you while you’re out buying the missus some new underwear for Christmas. As soon as you open your mouth, everyone thinks “I know that voice from somewhere”, but still can’t quite place where. Sweet.

Further research reveals he has the bearing and deportment of a man in a garden centre looking for potting compost. Avuncular and with squirrelish jowls, he has a teddy bear-like aspect and also a passing resemblance to ex-Scotland manager Craig Brown.

Seems a good candidate to reluctantly wear a gifted, slightly too tight, repeat motif Christmas sweater in red, white and green, and also to own a pair of driving gloves comprised of knitted string and soft leather. Photos reveal him to be a fan of the fits-where-it-touches plain man’s suit; a garment designed to offer no hostages to a fashion faux pas and which can be worn in most waking hours without fear of being pointed at.

One of the few commentators working today who appears on a t-shirt.

Lingo Bingo
Cut his comms teeth on BBC Leicester but doesn’t have any East Midlands in his very distinctive voice. Occasionally it does sound as though he’s doing a commentary whilst being choked by someone and it turns into a strangulated barking performance, particularly in moments of high excitement.

This is a good example of his artform; only Jonno Pearce can give the full vibrating uvula like this.

Tonally, his voice isn’t one of honeyed words and breathy seduction. No. He’s possibly one of the most aggressive commentary voices out there, especially when his dander is up. Sometimes sounds likes he’s describing the end of the world, when it’s really just a minor fracas. Has a somewhat exasperated tone at times, especially in relation to diving and other crimes against manliness, all of which evokes comparison to an angry old man in a deli trying to send back soup, fearful that if he doesn’t shout loudly, he’ll just be ignored.

Is prone to make those well-worn jokes with an ex-player co-comm to the effect that he was never famous for his pace, could still do a job and has he brought his boots? That or can be a little over-fawning about the player’s career. Once heard him doing this with Michael Owen and it was a little unpleasant. I bet he wears the same driving gloves.

Feels like he could be a bit of “the state of things today” type of moaner once you got him going. Probably finds sculpted eyebrows very annoying.

Hits and misses
There’s only one big hit you can have when you’re a commentator by trade and that’s to be allowed to keep commentating. And Ian’s covered every Premier League season, first for Sky and now BT Sport. That’s a long time and longevity is always one of the clearest indicators of a reliable performer, one who doesn’t make many waves. Has done five World Cups too. Also very popular stateside where he was voted their fave commentator a few years ago, and has covered both men’s and women’s internationals for ESPN.

Is equally famous, and probably even more loved, for his boxing work. His sometimes explosive voice seems eminently suited to acts of powerful violence to the face and body.

Is one of those constant aural presences in our lives, who you would miss if he wasn’t there, but whom you take little notice of when he is, to the point that you don’t even know it’s him half the time.

Big club bias
Couldn’t find any hint of who he might support, and there seems equally little BCB to any of his work either. Anyone who works in American soccer a lot isn’t likely to suffer from a desire to be cast in the golden light of the biggest clubs. This also seems like a testament to his ability to be anonymous.

Loved or loathed?
A long-serving, major commentator got in touch with me to say that Ian was “one of the nicest guys on the circuit, hasn’t become a Billy Big Boots type, unlike some!” He added: “Easily a guy to share a few pints with, and a damn fine commentator.” And given the veracity of the source, I think we can all be sure that’s true.

Definitely very well liked by his audience and very few wrote in with anything rude to say. The majority of social media responses were aimed at his boxing work which seems to be universally loved. I’ve never heard that side of his oeuvre because I get little or no pleasure from seeing people clouting each other around the head. Seems a bit weird to me – not so much the doing of the violence, as watching it for fun.

A few were puzzled as to who he actually was, even though they must have heard his name said many, many times. Again, this is testimony to his anonymity.  This is just a few of the comments made.

“Always been a fan of his commentary and Sky should use him on boxing again.”

“Perfunctory in the role. Which is no bad thing. In my head, I see him owning a Coconut Shy or other fairground stall.”

“I’m a fan, he seems knowledgeable with the right level of excitement without Martin Tyler style soundbite chasing.”

“No idea who he is. Should I be ashamed?”

“Seems to be a veritable jack of all trades, master of none type. Inoffensive in every sport he commentates on.”

“Once saw him and Ray Stubbs looking very confused in Turin airport.”

“Sat opposite him on the tube in London. Still my favourite niche celeb spot.”

“Excellent, for me the best one currently working.”

“Still seems a bit *too* surprised at what he sees, despite having probably watched 10,000 games.”

“Peerless boxing commentator. Pretty good on football too. Not flashy, but a distinctive voice in an overcrowded marketplace.”

“I like him. Honest, earnest, no airs and graces. Seems like a decent bloke, a much undervalued commodity.”

“Every game feels like it’s the first one he’s ever watched. Surprised by everything.”

“Makes every game sound like a 12 rounder from a sports hall. Corners take on the menace of a left hook.”

“Had to google him to find out who you were talking about. Didn’t recognise him, but the voice unmistakeable. Quality commentator.”

Proper Football Man?
Do us a favour. No commentator will ever be a Proper Football Man. To even be allowed into their weird world of outdated football ideas, vaguely xenophobic paranoia and tighty-tight-tight cardigans, you have to be a complete toady of the first water. Any post-1995 attitudes are not allowed. ‘No hugging, no learning’ is very much their guiding philosophy.

The PFMs look with a passive-aggressive sullenness at each other as they realise that them PC bed-wetters have dictated that Darke’s proper nickname is now illegal, even though it’s just a bit of banter and everyone is so sensitive these days. No disrespect, Jeff. So they’ll have to go with Darko instead, which means some of the more filmically-educated will be calling him Donnie or hopefully wearing a rabbit outfit. I love rabbits, me, Jeff. I wish I was one. Living in a hole would be great.

The fact he’s now working on BT Sport counts against his PFM status as every PFM knows that BT Sport is like talking to one of those Guardian journos that you want to hit in the face until he stops twitching. And working on American football simply makes them snort with contempt as they consider American football little better than an amateur kick-a-bout. The women’s game makes them snigger and whisper conspiratorially into each other’s ears about things that that they know nothing about, except for what they think they learned by watching 1970s Emmanuelle films.

So they’d find it hard to take Darko seriously as a PFM candidate, even though he’s a bit of a grump and looks built for a night out which ends with someone stuck in a burning wheelie bin while it’s pushed into a canal. It’s just a hunch but I doubt whether a night on shots of toilet duck, frangipani and nail varnish remover would hold many fears, certainly not as many fears as a night out in the notoriously sticky nightclub Slitz, or the attention of Miss Foot Long Smoked Pork Comestibles Body of 1978. Mind, he’s not alone in that. She was a very demanding woman.

Beyond the lighted stage
Again, due to a largely anonymous profile when he puts the microphone down, little seems known about his life outside of football. Has got a son. That’s about it. It’s very much against the modern trend to keep your head down do your job and go home, but that seems to be Ian’s modus operandi. And fair play to him for that.