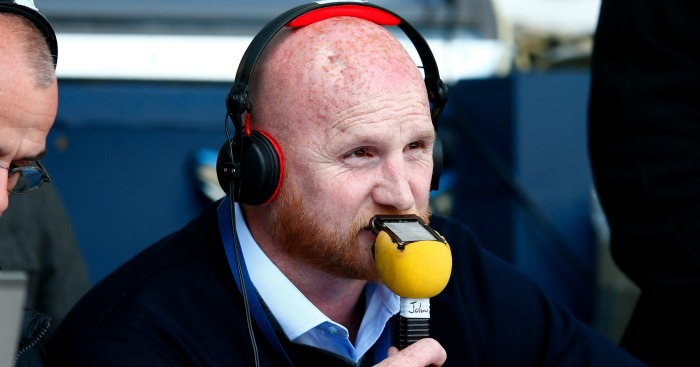 Fashion police
Has for many years put in good service to the 3XL shirt and the elasticated waist. A footballer about whom Mark Lawrenson would say, with a slightly uncomfortable purr to his voice, “ooh, he fills his shorts, doesn’t he?” These days he fills the pundits seat to maximum capacity instead. Stylistically he seems like he should be older than 40 and his clothes offer no concession to any fashion after 1990. Leather jackets are black or brown. Plain shirts are worn open at the neck, suits are dark and fit where they touch. Has made the sensible choice not to wear anything figure hugging or fitted.

Lingo bingo
Pleasing Welshness adds a touch of poetry to his work. Would love to hear him say “It is Spring, moonless night in the small town, starless and bible-black, the cobblestreets silent and the hunched, courters’-and-rabbits’ wood limping invisible down to the sloeblack, slow, black, crowblack, fishingboat-bobbing sea.”

Definitely a plain speaker and one always has the sense that a massive swear isn’t far from his lips. 5live’s Monday Night Club intro uses a short clip of him saying something about “he’s not the type to get on their backsides” which always sounds like a polite, slightly clumsy adaptation of “getting right up their arse”. Is one of those interesting pundits who, by default, is quite old school and is still young enough to know that football has moved on and changed and you can’t judge the modern game against how it was 25 years ago.

Hits and misses
Well-loved, especially in Scotland as a massive centre-forward for Celtic who could scores lots of goals, drink heavily and eat an almost uncountable amount of pies, which is rightly just about the only pre-requisite to become a hero north of the Border.

Other big hits include the small matter of successfully fighting vicious, life-threatening cancer and kicking a gambling addiction.
In recent months has been very eloquent and passionate about Wales’ success in the Euro qualifiers and gave them a blood-stirring call to arms on 5live. An always a welcome media presence, he seems to have a big heart and retains enjoyment of football.

Big club bias
None discernible. Being Welsh, playing in Scotland and a near-death experience tends to knock such silliness out of you.

Loved or loathed
There’s a lot of affection for the big man. His fight to beat testicular cancer which had spread to his brain was one that seemed almost impossible to overcome. The fact that he did is a testament to his own admirable determination, as well as the treatment he received. The feeling that he treated the cancer the way he treated Eyal Berkovic – with a swift kick to head, is irresistable.

Will never have to buy a drink in Scotland, where even playing for Celtic has not diminished the love for him across the whole Scottish football diaspora. Definitely seen as something of an everyman, with all the attendant flaws and strengths that brings.

Proper Football Man
OK John, take a seat, allow Reidy to pour you a pint of whale oil beer with a fluoroantimonic acid chaser and let’s take a look at your PFM application.

Well, I can say straight away, that we’re all impressed aren’t we, boys? Old school, massive shorts-filling centre forward, who doesn’t look like a metrosexual, came up through the ranks at Luton, played for Arsenal but was sold by a foreign manager. Very good. You were a top player, but not top, top. You kicked a foreign, square in the head in training? Oh, that’s beautiful. Then you were a bit of a journeyman who was seen as out-moded and old fashioned by Tw*ts That Ruined Football. You’ve every right to feel bitter about that, son, every right.

A good spell in Chilly Jocko Land earns every PFMs respect because they play proper football up there, with brandy on the breath and an infected haematoma on every limb. Mmm, the PFM is purring, full of nostalgia tinged with the innate bitterness that runs in his bloodstream like pollution in the river next to a steelworks in the 70s.

And what’s this? A gambling problem from an early age, coupled with being a huge pish heed and a self-confessed shagger? Oh my word. Take a bow, son. That is absolute class. Reidy’s abandoned caravan of recovery will be a welcome sobering up facility for you and if you’re papped at 4.30am coming out of a club in Maryhill called Fanny Batter, with Miss Independent Deep Fried Comestible Purveyor of 1983 on your arm, no-one will be shocked.

Then you’ve literally beaten death, got impressive holes in your head and can now spend your days in a V neck lambswool sweater, drinking wine, attending charity dinners, balls, auctions and golf days, in order to raise money for charity. Reidy, Reidy, son – look at this. He’s perfect! Perfect!

This combination of football, all-male bantering opportunities, media and charity is the lifestyle that every PFM wishes for himself. Johnny, my son, take a seat. What are you drinking next? A large radiator fluid and Malibu, it is. Reidy, get him sorted, this is one of the best applications we’ve had since Razor Ruddock. Move down one Sherwood, or we’ll hang you by your feet out of the window of FA headquarters and set your pants alight again. Johnny here is our new best mate.

Beyond the lighted stage
Get’s a lot of TV and radio work and is very active in his testicular cancer foundation work. Seems to have settled down in the recent years after getting well. Still hard to imagine him attending slam poetry nights, or nipping to the local exhibition of cubist art. But if you want a man to raise money, Johnny’s the fella. And that’s lovely.