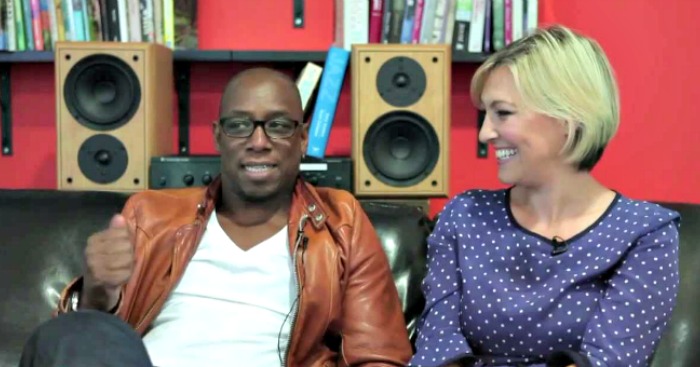 This week John Nicholson turns his widescreen plasma eyes on Ian Wright’s carer, Kelly Cates. But is she a Proper Football Woman?

Fashion police
In a culture which tends to define women primarily by how they look, rather than by the quality of their work, choosing what to wear to do your presenting gig must be tricky but Kelly plays it with a straight bat. Not a slave to the flashy or the uber fashionable, instead she relies on doing a solid presenting job and usually favours plain, understated, undemonstrative clothes in neutral colours to do it in. Occasionally rocks a well-cut suit. Smiles like she means it. Usually sports a side-parting of some sort. Basically looks like an all-round, consistently top notch pro.

Lingo bingo
Actually a proper Scotty but has lost the accent and replaced it with a more neutral flavour. The anglicized Scot always has a linguistic advantage because they have the ability to drop into the Scottish vernacular at any moment to add force and the suggestion of an imminent knife crime to any social situation.

I’m sure, given her west of Scotland roots, Kelly could give it a big ‘wits up wi’ yoor coupon, ye bawbag,’ at any time and I rather wish she would, as it would certainly make 606 more interesting.

On that show, she often has the lilting voice of a sympathetic nurse which means it sometimes sounds as if she’s Ian Wright’s carer.

Has a lovely infectious, rolling laugh, which is not to be underestimated in making a good broadcaster and communicator.

Hits and misses
Has worked on quite a few channels, in one capacity or another, for some time now, so is very much a familiar and friendly face. I doubt anyone groans when she pops up on TV or radio and that in itself is a big hit when you’re well-established because familiarity can breed contempt. This is possibly because she’s not an overbearing personality trying to ham it up for the camera or make out they’re some whacky funster. But that’s not to say she isn’t funny or entertaining when appropriate.

Currently fronting up Channel 5’s Football League coverage alongside George Riley. She’s a well-proven top professional and must surely be due a high profile, mass market gig soon, if she wants it. I wonder if there’s reluctance in case it looks like some form of nepotism?

The more relaxed, less formal setting of the radio studio, which requires interaction and communication without much of a script, is probably where she does her best work. She was superb on Fighting Talk and had plenty of grit to fight her corner. Always seems well across events, is cheerful and up for a bit of a laugh, and who can want more than that in this life?

That being said, the football phone-in feels like a dog that has long since had its day and is home to too many people who are an odd shade of stupid. One recent caller, a Manchester United fan, said he just wanted a manager who stood up more. He was serious, too. I mean, imagine having to treat these people as though they’re sentient? But Kelly does it all with good grace and a degree of professionalism that is often missing on 5live weekend phone-ins, and doesn’t so much as once keep repeating the same thing over and over in an ever-louder bleating voice, ignorant to how witless it is. Yeah, like I say, she’s a professional broadcaster.

Big club bias
For obvious reasons she is a massive Liverpool fan but this doesn’t seem to leak out into her 606 work, possibly because she’s preoccupied with trying to knock an over-excited Wrighty off the roof with a big stick. Presenting lower league football should also give you an appreciation of the dusty end of football’s fretboard, as will talking to Michael Bridges about Bolton Wanderers v Huddersfield Town….zzzz…sorry just dropped off for a moment there.

Loved or loathed
Women who present sports telly often get a tough time from the more reactionary elements of society, are subjected to sexist comments and too often judged first, foremost, and sometimes wholly, on appearance. Cates herself has said that being a Dalglish helped deflect the usual “get back in the kitchen, darlin’,” garbage because potential critics assumed she must have football in her blood and might have at least watched a few games. Even so, it’s not the easiest road to walk.

Channel 5’s football league programme was criticised early on, though less for its presenters and more for its structure. It seems to have settled down now, though is clearly on a wafer-thin budget.

You couldn’t not like Kelly, because she’s quite obviously a decent soul, always does a good job and brings a bit of sunshine with her. And there’s just no faking that most valuable asset for a broadcaster: likeability.

Proper Football Man
Watch your language boys, put your pants back on Charlie, no not on your head, and give the brandy enemas a rest Reidy, there’s ladies present. No offence, luv. I never touched her, honest, Jeff.

I’m not saying nothing about her in case Kenny is watching, Tommo, ‘cos I’m booked to play golf with him every day for the next 15 years.

For me, Clive, she’s a lovely girl. Can you say girl these days, Jeff? I think I was married to one, once, but I got away with it.

Obviously, no woman can be a PFM. Not even one with football in her DNA. That goes without saying. In the world of the PFM, women who are not, what they still call Dolly Birds, are frightening and possibly lesbians.

They exude awkwardness just having to be around women, especially outside the context of a casino or nightclub and if not buying them Lambrinis and showing them their watches, they basically don’t know what to do. They are especially awkward with women who know a lot about football, feeling their masculinity is being diminished and that the danger of saying something unwittingly, but massively inappropriate, is ever present. And there’s nothing frightens them more than getting caught up in a Twitter storm with Mary Beard.

Has she really got a beard, Gary?

They are far happier making jokes about ‘ladies’ not knowing offside rule, even though a lot don’t even know it themselves.

Was he active, Mark? Nobody knows any more, Motty.

So it’s a case of, a woman who knows a lot about football? Not for me, Clive.

But since the heinous business with Keysie and Andy-sie (which Kelly neatly skewered in a subsequent Tweet), everyone knows they’ve got to be on their best behaviour because you can’t say anything these days, and I only asked her if she was wearing a bra, anyway. No offence, Jeff. It’s just banter, innit? It’s a compliment, really.

They might conceptualize Kelly as a Proper Football Woman. Having grown up in a footballer environment, it would surely hold no fears for her, but as such, she would only be given the keys to the PFM executive washroom in order to clean up them things what the boys have done in there. The state of this place. Have you been eating Reidy’s pickled baby mice again, Merse?

That being said, as a PFW she’d get offered one of Reidy’s carefully honed ‘lady juice’ blends of oven cleaner, hair dye and hallucinogenic toad, served in an oven glove. Probably has her own shopping trolley too – ‘cos women love shopping, don’t they, Chaz? Could be useful. Trouble is you can’t hit a woman in the face and make out it’s a form of bonding, the way you can with a PFM.

And although there’s no chance of it happening, obviously the PFMs would love to see her emerging from Buxton hotspot, Big Muff at 4.27am with the former Miss North West Industrial Welding Torch Thighs and Torso of 1988, because the boys have heard about lasses like that and seen them in McAvennie’s magazines, even though they don’t know what they do in bed. No offence. I don’t want no trouble…we’ve all had a drink, lads…c’mon, let’s set fire to TC and see if we can throw him over a house.

Beyond the lighted stage
Lots of charity work, as befits someone who was brought up by a mother who hosts an annual Burns Night charity ball which raises over a million quid for cancer care, and a father who must have attended more charity golf days and gala dinners than any other human on earth. Someone (usually Alan Hansen), somewhere, is always playing golf with Kenny for a good cause.