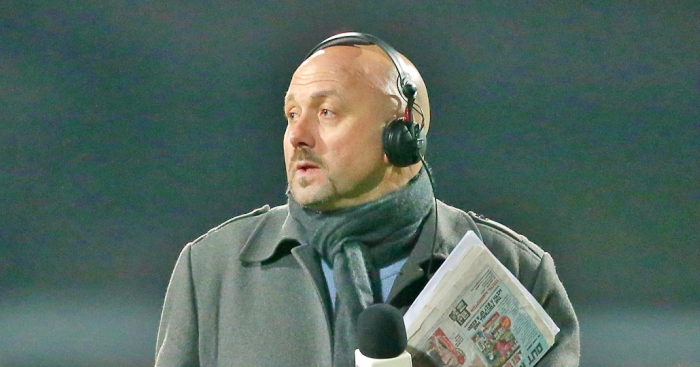 Fashion police
Unless it’s just an acid flashback, I’m sure I remember seeing footage of Clem, possibly sporting a kind of mohican, presenting a fashion series on Tyne Tees in the mid-80s called Off, or possibly On, The Peg. Perhaps hard to imagine now, but he also had his own fashion label. Haven’t we all?

Seems to favour robust, non-metrosexual menswear. Quilted jackets in navy, heavy coats, possibly of a nice merino and mohair mix. Suede, leather and smart woollen scarves are all de rigueur, especially as he always seems to be exposed to a cold north-easterly. Sometimes sports one of those modern versions of a flat cap. Shirts worn outside of jeans for more off-duty labours. V-neck jumpers under a wool jacket and open-necked shirt is also a standard interview outfit when the sleet abates. Loves a tan leather shoe.

A solid unit, he certainly fills a trouser well. Sometimes sports facial hair but not outlandishly so.

Has the sort of vaguely intimidating visage that suggests he could moonlight as a doorman who has a fierce dog called Tyson, or possibly be a gangster on a witness protection scheme who has a terrible secret involving a chainsaw, a Tory politician and a tangerine.

Pleasingly substantial head seems to comprise at least 30% of his entire body, meaning he could be picked up and used as a very effective battering ram, which is always important on a night out in the Boro, or if Middlesbrough are playing Millwall away.

Lingo Bingo
Looks like a man who would have a deep, basso profundo oak and tar voice, but actually speaks with a relatively light timbre. Middlesbrough accent is well to the fore, though hardly the full Chris Rea. “Mate” is “maayt” and he deploys it a lot. A ‘g’ and an ‘h’ is often dropped so “he’s doing the business” becomes ‘e’s dooin’ the bizness. Avoids the Teesside habit of ending a large percentage of statements with the word “like”.

I have searched in vain to find a clip of him saying Santiago – which is one of a number of words which bring out the finest elements of the Teesside twang – pronouncing it Santee-argh-goah, and taking at least ten second to utter, due to elongation of vowels.

People from somewhere else probably think he’s a Geordie but the Teesside accent is far more exotic and elusive simply because relatively few people have it – the area being so small – and even within itself, it has significant variations which makes a Stockton-on-Tees accent like mine significantly different than one from Middlesbrough, five miles away. It really is amazing how these variations exist and persist, even well into the more linguistically homogeneous 21st century.

Hits and misses
Got a broadcasting gig via a Boro fan podcast in the late 90s with local broadcasting legend, Bob Fischer. In an overcrowded marketplace, he’s done well to carve himself out of a niche by being one of the BBC’s go-to people for lower league coverage. It is even better that he has actually cut a niche that he enjoys and he allows his natural enthusiasm for the subject matter to soak through, like a faulty cartridge pen in the school blazer inside pocket of life.

Has become ubiquitous on the BBC for years, doing Late Kick Off, The Football League Show, MOTD, MOTD2, 5live and more. Used to present a really interesting regular Football League discussion programme on 5live, but that seems to have been canned and not replaced, which is a great shame. Still pops up on the MNC when a big lower league issue needs analysis. No matter how far down the pyramid, or how far out of the way, Clem will know about it.

Has what sometimes seems to be an encyclopedic knowledge of lower tier managers and players. When he’s asked on to 5live discussion programmes, you know you’re going to get a whole lot of tasty lower league meat.

In 2014 did one of those ‘dodgy trader’ type shows called How Safe Is Your House? Seemed rather good at confronting men who were fixing gas boilers without the relevant certificates and qualifications, though it was hard not to see these confrontations as some sort of surreal post-match Q & A session at Leyton Orient or Sincil Bank. Half-expected him to collar an iffy builder and ask him about how he fits midweek training around his job.

His Twitter feed can educate you in the details of lower league life, such as with the fact that Justin Edinburgh, Northampton Town manager, owns two branches of Toni & Guy.

And, just as importantly, he can take being given a good soaking and having food dumped on his head like a trooper.

Big club bias
Like most Teessiders, is far too down to earth, rootsy and unimpressed by money and glamour to have any truck with BCB. Clem is the very personification of the exact opposite: small club bias.

Loved or loathed?
I have long been an admirer of his work and it often just locks in with my own outlook on football. I would deliberately tune into a programme just to see or hear him do this not inconsiderable thing.

Obviously, there are those who preoccupy themselves only with top-flight football, who will rarely, if ever, stumble across our man. So there was quite a bit of “who?” Some aren’t too keen on his blokeishness and feel he tries too hard to be overly matey with managers and players in his role as Clem: Man of the People.

But that’s to mistake a genuinely open, approachable, enthusiastic nature for a contrived character, and as such is an example of post-modern viewers always suspecting there’s something more cynical lurking beneath the surface, unable to accept someone might actually be for real. No good can come from that.

Also, it’s worth noting that when you’re tasked with such a wide, roving reporting role as his, you need to win friends and influence people in order to get them to talk to you and tell you their interesting stories for your features. So you need to be friendly, open and gregarious in a way that isn’t required of, say, Paul Scholes. Also, almost by definition, being distinctive means you will divide opinion.

And from everything I know, and have been told, what you see is what you get with Mark. There’s no artifice about what he does and certainly no glamour, and that’s how he and his fans like it. Indeed he must feel like he’s doing his perfect job when asked to go and interview Scunthorpe’s manager or report on a game involving Rochdale or Hartlepool. For him, like so many of us, football is not merely an extension of the entertainment industry, or a home for corporate greed mongering. Rather, it is about community, friends, local people, local businesses and civic pride. And he totally gets that there is joy in talking about small match-day details with a fan who has been going for 60 years.

Lots of views from Twitter from both sides of the Clem fence:

‘Has the least likeliest face-to-voice ratio I’ve ever encountered.’

‘Once of BBC Tees decent guys but seems to be overly chummy & trying v hard to be part of the in crowd & mates with everyone.’

‘The single most enthusiastic interviewer I have ever seen.  Clearly loves his job and the Football League. Wild hand movement!’

‘I like him, enjoyed “going to grounds on matchday” bits on fls. Rather watch that than Steve “eating for 5” Evans.’

‘Get the feeling he hates “Clem” but is in too deep to become Mark. Uses the phrase “worldie” which he should leave to the kid.’

‘The insistence on him being in front of camera for reports, always made it feel like the Clem Show.’

‘Overly familiar and matey with seemingly all managers in the football league.’

‘A very good egg, and has a unique style.’

‘He’s always going to be bridesmaid never the bride, isn’t he?’

‘Very knowledgeable about the EFL, but seems that he is now pigeonholed. On-Pitch intros to Football League Show were tacky.’

‘Comes across as a bit of an annoying pub joker type; the sort who’s over-fond of saying “Cheer up love, it may never happen”.’

‘Something slightly irritating about him although can’t put finger on what it is. Great FL passion and knowledge though.’

‘You can’t wing it with lower league. The fans down here will call you out straight away.’

‘Love his enthusiasm and his knowledge of the “EFL” (vom); can’t shake that he’d rather be a pal than a journalist though.

‘Love his enthusiasm but really find him just a tad sycophantic.’

‘Looks like he was turned down by all four dragons on Dragons Den for his new Restaurant Point of Sale system.’

‘One of the joys of lower league.  Less pundits with generic mundane comments.’

‘Get past ‘Clem’ and through to Mark Clemmit and it is clear he is someone who knows and loves the game. Gets much undue stick.’

Proper Football Man?
The boys have got high hopes and would be in flirting mode, with lots of little squeezes, arm punches and over-loud laughing. Clem is a great nickname which is easy to say after a pint of horse liniment, which is very important. Even better, as his middle name is Charles, his initials are MCC. Like what the cricket is, Jeff. Ha ha ha. This would keep the boys amused for months, as would his bald head which, along with pronouncing a word wrongly, having a big nose, or wearing a garish tie, is one of the funnest things any PFM has ever seen.

He’s also got the sort of bear-like physique which could cope with the physical requirement of a being a PFM, especially the fights in casinos and the mugging of people for their chips as just a bit o’ banter, officer. Head looks useful for sticking the nut on any of the boys what’s had a few shandies and is getting a bit naughty and sayin’ things what he oughtn’t, about things what he shouldn’t even know about someone’s missus. Ain’t that right, Chunky?

They also like that he did a radio show called Red Balls On Fire. Putting deep heat in someone’s underpants is my favourite practical joke, Jeff, because inflicting pain and humiliation on people briefly assuages my self-loathing and soothes my existential pain at the black void that my life has become.

Also, unconfirmed marital status suggests a man who might be available for the close attentions of Miss North Ormsby Upex Pie Arse of the Year 1977 on a night out at the intimate Thornaby nightclub and girder riveters, Steel Erections.

Reidy, I told you, you’ll never knock him down with a cuprinol daiquiri, they serve those in chip shops around here, and don’t be trying the fermented baby mice wine, either; they give kids that at school in Dormanstown. Blimey, you think you’re working class until you get to Middlesbrough and then you realise you’re middle-class.

Mind you, he does work for the pinko liberal BBC. Watch your backs lads. And he has yet to be on BeIn with Keysie, which is the new media benchmark for media PFMing of the highest order. But any man who has had chips dumped on his head in post-game dressing room celebrations makes all the boys nod appreciatively and feel an irresistible urge to cut the crotch out of someone’s suit.

PFM Status: Pre-Approved, despite no application being made.

Beyond the lighted stage
Did that thing that a lot of football people seem to do, going up Mount Kilimanjaro to raise money for Marie Curie Cancer, after his mam died at just 58. Loves a hosting gig. Likes walking.

Seems to live a blameless and highly enjoyable existence, and fair play to him for that, like.