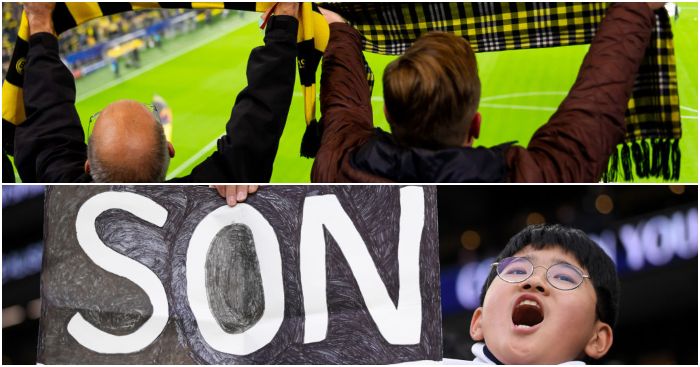 I live in a city which attracts a lot of tourists. There are good and bad sides to that.

The bad is that on particularly busy days, usually during the summer, the local streets fill up like clogged arteries. People visiting new places don’t race through them as quickly as possible, either, not in the way locals do, and so getting anywhere in a hurry isn’t easy.

But thank goodness they come at all. What would it say if they didn’t? Consider the consequences. There’s no industry in this city and extortionate business rates chase away any entrepreneurs, so without people wanting to see buildings and parks, there probably wouldn’t be anything here at all. Nor would there be four Café Neros within 400 yards of each other, but it’s a give and take situation.

Football Tourism is a strange issue. Odd, because it has different implications depending on who’s doing the tourism. The majority (or loudest) attitude seems to be that non-British people inside British grounds are a nuisance – dampeners on atmosphere, stealers of seats, takers of too many photographs.

Conversely, when the situation is inverted and British fans head off for Barcelona, Milan or Dortmund, they’re being cultural and adventurous and enjoying the full breadth of the football world. When they fill their Instagram accounts with flares and pyro and elaborate Tifosi, we nod along in appreciation.

In fact, there are entire brands built on that dynamic and, together, they comprise the Industry of Football Cool. Trainers, brutalist architecture, cans of polish lager; it’s the height of sporting fashion and it has been for some time.

If people head too far afield, as The Great Copa Libertadores Controversy of 2018 proved, they’re derided for their hipsterism. At the same time, however, someone who travelled thousands of miles to Old Trafford, Stamford Bridge or the Emirates wouldn’t be viewed in the same way. They house very popular teams, of course, but the act is the same. Most likely, it involves similar cultural contrasts. Different food, different languages, different ways of showing support.

So it’s an interesting contradiction. It probably speaks in part to a lingering proprietorial attitude. It’s subconscious, but still telling that while British people who head abroad see themselves as inspectors of the sport, as the game’s emissaries, anyone who fancies enjoying the atmosphere of – for instance – an English derby, is treated very differently.

On the one hand: it’s our right to explore. On the other: f*** off, football’s full.

At this point, it’s worth challenging a misconception. Football tourism doesn’t stop more local people from attending games. That’s not an argument. What stops local people from attending games is predatory pricing. Football clubs hate supporters. They just tolerate them for the sake of financial sustenance. They’re the tripods from War of The Worlds, drinking disposable income and leaving impoverished corpses behind.

They’re unfeeling; they have no sense of loyalty at all.

Nevertheless, English football is highly sensory and while that’s a clichéd observation, it still contrasts to that which is found elsewhere. Think of the way the South Koreans supported their national team during the 2002 World Cup and the unusually benevolent quality to their fandom. Or, for those who have been, compare even the mildest game in this country with the experience of watching baseball in America, or even the quicker sports, like basketball and American football.

If you know what that refers to, then you know how different the general mood can be.

Maybe these comparisons are slightly out of date. There are MLS teams who now play in front of crowds which are quite European in tone, but – as a more general point – these countries are so big that the notion of home and away support can rarely exist in the same way.

Growing up with it is different. It’s as standard. But the duelling dynamic that exists in European stadiums must be amazing to experience for the first time if you’re not used to it. The point being, obviously, that football tourism into England probably depends on the same draws which drive its flow in the other direction: atmosphere and authenticity; or just difference. Has anyone ever been to a Bundesliga game without taking a picture of the beer they’re able to drink inside the ground? That’s the same, just in smaller form. It’s the pursuit of something which isn’t regularly available.

As a principle, fan tourism is also good. Since Son Heung-min’s arrival at Tottenham, the number of Korean supporters attending games at White Hart Lane, Wembley and now the new stadium has been steadily on the rise. That’s Son’s doing, he’s that famous in South Korea, but it’s easy to take that as a point of pride. Maybe most of those fans will only visit once, but that they want to come at all definitely describes something positive.

After all, who was booking a flight to watch Tottenham 20 years ago? There weren’t many packages offering the chance to see Chris Perry and Ben Thatcher live, were there?

It’s flattering. Most people have a very personal relationship with their club, whether it’s reciprocated or not, and admiring glances from outsiders are an endorsement of that passion – specifically of their club, or more often of English football as a whole.

Ultimately, it’s better to live somewhere that other people want to go. It takes quite a narrow mind not to realise that.