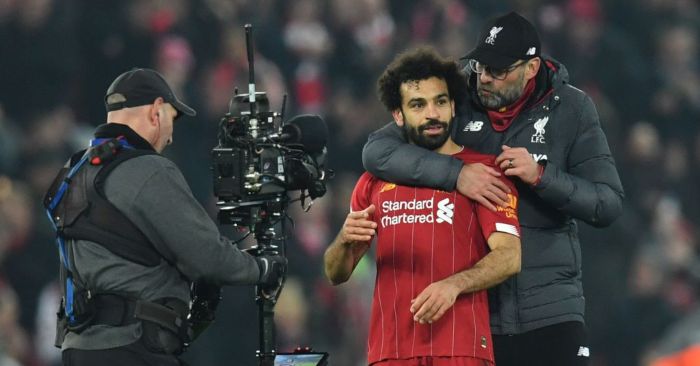 There is no going back now. We have seen the power of the state in supporting society. Now for free football.

Well, well, well, turns out that when push comes to shove, scratch us and we all bleed socialist red. Suddenly we see the power of the state to support people as a good thing; we see the virtue of investing in public services for the good of our people. Statism, for so long derided, is saving us and ours. Let’s hope there’s no going back to the politics of the past after this. Branson, Ashley, Martin: you boys took a helluva beating.

We’ve also seen that it is the millions of low-paid workers, from supermarket shelf-stackers to cleaners and delivery drivers, that actually facilitate the easy life we enjoy.

Paid as if they are all but worthless, disposable and easily replaced, this crisis has shown those people to be axiomatic to the running of society. Sure, clap them now, but pay them properly in the future, and never vote for those who applauded cuts and tried to justify low pay.

This is a time of great change. Anyone thinking that when it’s all over, everything will just go back to ‘normal’ is in for a shock.

Firstly, there is no normal. Normal is only what is contemporaneously familiar.

How things were in January 2020 was very much not normal for how they were in 1990 or 1970. Things change and change all the time, even without the intervention of a pandemic virus. There is never any ‘going back’; we only have one choice and that’s to go forward with the lessons we’ve learned.

Before last week’s partial but welcome nationalisation of life, too few questioned whether the rights to broadcast football should be sold to whomever would pay the most, regardless of the consequences. Talk was not of what is good for the people or the game, but what is good for generating the most money, and those two things are not inevitably synonymous, especially when the money paid is merely hoovered up by ludicrously inflated wages, agent cuts and transfer fees.

The people have never gained from this but a small number within the industry have; mostly the players. And yet the virus has shown us that without the people there is no game. There is no product to sell. There is no money. Without a crowd, games have no meaning. It has surely never been clearer that the most important part of the football equation is not the money, not the TV, not the players nor agents or managers, but The People. Without us they have a worthless, meaningless pursuit that no-one will pay to watch on TV. And no TV means no Big Money.

To put it bluntly, their wealth is a castle built on the sands of our presence. Without us, that castle is washed away. Oh yeah. The power resides with us, not them; let us never be marketed away from this profound truth

And now that we see the truth clearly, let’s give due notice to broadcasters that we are stopping the privatisation of football broadcasting. Sorry. It’s over. There’s a new kid in town. It’s called the state.

Let football on TV be for us all. Remember, as the new mantra goes: ‘We’re all in this together’. Of course, the truth is we’re all in it together all of the time, but we’ve been very successfully sold the notion that it is the individual that achieves, not the society which supports the individual, so everything must be subjugated to the economics of the individual. It’s all about what you or I want, not what is best for we or us. This is the profoundly wrong road we have driven down for at least 40 years. We are nothing without each other. Turns out there is such a thing as society, even if some are only just realising this.

The current situation shows us so clearly that collectivisation works. That once we stop saying the devil can take the hindmost, all our lives are made better. Greater equality doesn’t mean less for ourselves, it means more for everyone and that makes things better for each individual. This is what I call the Springsteen doctrine of ‘no-one wins unless everyone wins’.

And so, whereas a couple of months ago what I am about to suggest might have seemed fantastical, now, in the new reality, it will seem far less radical. And that’s because it isn’t radical. It was only made to seem so by virtue of the extreme economic model we’ve been following for so long. When you’re in an extreme position, the sensible centre seems a long way away.

My proposition is that the state should buy the rights to all live football in perpetuity when they next come up for sale and broadcast them to the nation on a free-to-air basis so that everyone can see the nation’s favourite sport regardless of ability to pay for it.

This would allow the game to once again be in the bosom of the common collective. To be something we can all access and talk about. It will be in all our lives, not just those who can afford it. Don’t let anyone tell you that people should be socially excluded from football by economics. Football is The People’s Game. The ability to broadcast it should be owned by the people. That’s just sensible, not extreme or radical. Why would we think otherwise? The same people can make the shows and broadcast them. Nothing would change, only the ownership.

Like I say, until recently this may have been thought to be actually impossible. As impossible as the government paying 80% of your wages. But we now see the huge spending power of the state unleashed and we see the good it can do.

So no-one should be saying, as they did when I first wrote about this in Can We Have Our Football Back? that it would be too expensive or that it isn’t the sort of thing a government should be spending our money on. That’s not an argument that can be made now.

But should anyone still try, the fact is that buying the rights to broadcast football would be revenue neutral and I suspect would soon save the state money across a five-year period.

This is because greater exposure to the game – and FTA football increases audiences exponentially – has been proven to inspire greater levels of participation, especially among children, but also more widely. It inspires activity. It makes us want to kick a feckin’ ball around. Currently, we are in a type 2 diabetes crisis which costs the state £14 billion per annum and rising, a condition which is largely caused by lifestyle and diet choices, something which more exercise would help alleviate.

We are also in the middle of a mental-health tsunami with 71.5 million prescriptions written out for antidepressants at a cost of half a billion pounds per year. But exercise is proven to help mood. Coming together to play games or watch games also reduces the sense of isolation that becomes a way of life for the depressed. These are big wins for us all.

Similarly, being able to watch football on TV for free ends the intrinsic social isolation that comes with it being unaffordable. Social isolation is a pernicious problem that costs the state money in dysfunctional behaviours of many different flavours from vandalism to violence. When people are shut out of experiences by lack of money, they lose investment in society and once you’ve lost that, you’ve lost hope, so why not get wasted on drugs or smash someone in the face or rob a house?

It all has a cost attached. Keeping everyone inside the tent saves all of us money and heartache.

What I’m saying here is that when you look at society holistically, the cost of buying rights to broadcast football would be offset against savings that would be produced through better health and societal outcomes. Eventually, as those benefits wash through a generation, it’ll save a lot of money and more importantly, produce a nation more at ease with itself and more content.

The type 2 diabetes, obesity and depression figures haven’t happened randomly. They cannot be separated from the nature of an economic system where people work too hard for too little money and even less respect. And when you have a low-wage economy, where millions are undervalued and left to exist on next to nothing while a small minority get ever richer, rubbing the nose of the poor in their wealth with every £60,000 car that they drive past in, it isn’t any surprise that it makes many unhappy and they find expression in drink, drugs and over-eating.

We can’t go back to these old, out-moded economic ways of thinking. The way things were quite blatantly wasn’t working for the majority of people. We need a new deal; we need a new frontier.

So how much would it cost? I have no idea how that figure might be worked out. But at the peak of the market the Premier League domestic rights were sold for about £10 billion over three years, a period over which the type 2 diabetes bill would be at least £42 billion, probably nearer £50 billion as it rises each year. So even if £10 billion was the total cost for all live football in every league and competition, (it wouldn’t, given the market is now contracting domestically), we need only shave 20% off that diabetes and depression expenditure to make the purchase revenue neutral, which given the positive health benefits proven to come from exercise and social inclusion, is surely likely.

And this is to take the highest cost. Obviously, it is likely to be a lot less, and savings to pay for it even more modest to achieve.

And what government could resist such a populist measure? They’d be painted as the party that gave The People’s Game back to the people. No-one would stand against that.

I know some paint this sort of thinking with a political label but I don’t care what you want to call it. All we should be concerned about is creating a better, happier, more content and fulfilling society, with not one person left behind.

Right here and right now, at this special moment in our history, it is obvious that only inclusion, collectivism and togetherness works. The informal societal network constructed from understanding, empathy and kindness supports and nurtures us all in a way that competing with each other for resources never will.

We are each other’s sisters, brothers and others and yes: we are all in this together, today, tomorrow and forever.

So when we have got through this, we should be all able to come together, as the people, to watch The People’s Game.