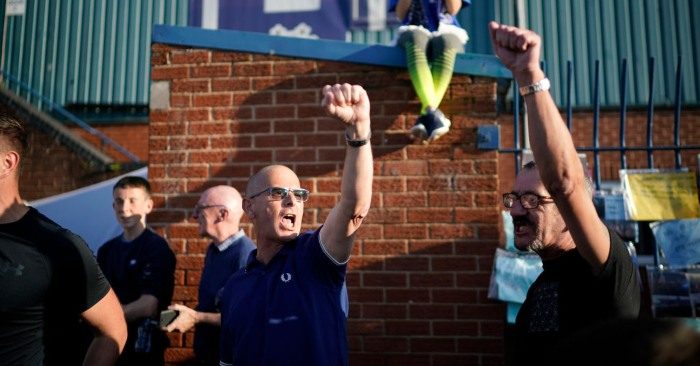 The events surrounding Bury FC (and Bolton Wanderers) are several shades of appalling and the blame can be cast at several doors. There seems to be little regard for the civic importance of football clubs, nor of their role in the lives of the honest toiling citizenry. But as appalling as this is, there is always light on the horizon. This may just be the darkest day before the first rays of a new rising sun.

Football belongs to the people. And try as many have, you can’t beat us. The rich, powerful and mendacious can try and put us down, they can try to oppress us, or deny us freedom and opportunity, but when we come together, we are powerful, we are strong and we won’t be taking your sh*t any more, right? As Jim Morrison once said, they’ve got the guns, but we’ve got the numbers.

It’s always worth remembering this when we’re getting abused by those who think they have authority over us and by those who seek to exploit our good faith and loyalty for their own ends. In doing so they are breaking the unspoken social contract between the people and the powerful which says that we will not rise up in bloody revolution and dispossess you of your wealth and power, as long as you don’t take the piss. But there’s been too much piss-taking recently. Bury is just the latest example.

The important thing is that in Bury’s case, some incarnation called Bury FC or similar, either continues to exist or is formed from its liquidated ashes and can be supported by the same fanbase. There are precedents for this.

Darlington FC, after being bought by George Reynolds – a character so vivid that you had to wear shades – were eventually put into administration and kicked out of the Football League. To cut a long story short, the FA forced a name change and demoted the club – now playing as Darlington 1883 – to the Northern League Division One, the ninth tier in the 2012/13 season. They won three promotions in four seasons, now play in the National League and the FA let them change their name back to Darlington FC.

My pal Tez is a Darlo fan. Always has been since 1969. I supported the Boro – because Ayresome Park was closer to my house by two miles than Feetham’s, Darlington’s old ground – but he lived one mile closer to the Quakers so that settled it for him.

He maintains it has been much more fun rising up from the depths than it ever was clinging on in the Football League. “There’s been something to aim for since we rebooted the club. And whatever league you’re in, winning games is still great. We get 1000 – 1500 for every home game and over two thousand for the York game. I mean, the football isn’t great – but that’s not the point is it? Never has been. We’ve got our club. We might struggle to rise up any higher but the point is, it’s as much fun as it ever was, more so in fact. So while it seems like the end of the world when the club goes tits up, it doesn’t have to be. It can be the start of something better.”

His experience tells us something that I think most of us understand; first and foremost just being there is the main thing. While the Premier League tries to sell itself as an arm of the entertainment business in order to try and justify its grasping greed, we all know that’s rubbish. Football fandom is about just being there, either in person, or in our hearts and minds, in our soul and guts.

I’d suggest what Bury fans fear most isn’t being kicked out of the league per se, it is not being able to just be there. Of not having the club as part of the colourful tapestry of their lives. Wrenching that warp and weft away is a horrible thought. It removes history, it removes structure, it removes routine and it removes a bond between friends and strangers which is nourishing and supportive to the psyche every single day. That’s why it feels like such a loss, why it feels like a death in the family.

But let’s not forget for one moment that football is The People’s Game and we the people will continue to make sure that is still the case long after the incompetent and the greedy, mendacious bullshitters have filled their pockets and walked away. Our communities can come together, create and support a football club, be it an old one or a newly formed replacement. And I’d suggest that is exactly what will happen in Bury’s case. You can’t kill football, it is a sporting couch grass, always sprouting up and growing anew even in the least fertile soil.

As Jimmy Nail once wrote about Newcastle, “everything they tried to kill, we will rebuild”. That should be Bury fans’ mantra, indeed our collective mantra, because we’re all in this together. Football is important, it is ours and nothing and no-one will ever take it from us and if they try to, we will rise up and one way or another, we will take it back into our collective embrace.

Today, in a very real way. we are all Bury FC fans.