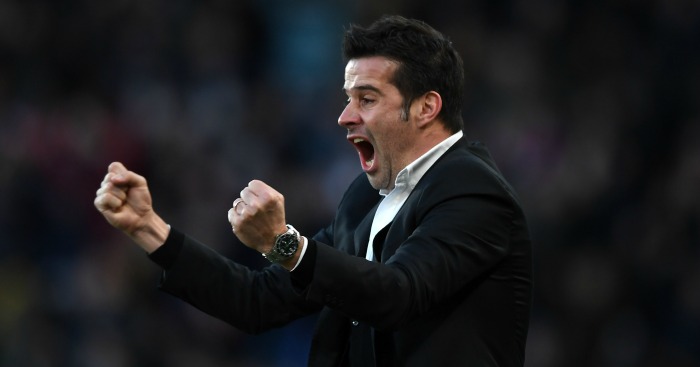 “It’s totally astonishing that they have plumped for someone like this. It’s baffling. When there are a lot of people out there who know about the Premier League, about what’s required to dig in. He’s not got a clue.”

It was Paul Merson who attracted the most opprobrium for his ignorance and barely concealed xenophobia after the appointment of Marco Silva at Hull, but it was Phil Thompson who declared that a man he knew nothing about did not “have a clue”. So it was difficult not to be amused by the sight of Thompson on Sky Sports, being forced to deliver updates of Hull’s three goals after Bournemouth’s opener; it sounded awfully like Hull had ‘dug in’. Inconceivable for a side managed by a foreigner.

Presumably, British bosses like Sam Allardyce (destroyed by West Ham), David Moyes (humiliated by Stoke) and Paul Clement (annihilated by Arsenal) all know how to ‘dig in’, so the clueless Silva has little hope of success in what increasingly looks like a four-team battle for survival. How could he possibly succeed where Mike Phelan – a man who very much ‘knew’ the Premier League – had failed?

The clue was in quotes from Ryan Mason this week. When asked what had changed under Silva at Hull, the answer was – surprisingly – “a hell of a lot”. He continued: “I think he’ll raise the standards. Personally, I think under this manager you can’t cut any corners.”

The implication is that the Hull players could very much cut corners under Phelan, which must have been a shock to Mason after two years in the eye of the Mauricio Pochettino storm. Silva – accustomed to winning silverware as a manager in Portugal and Greece – has brought more intensity to a team that looked relegated just a few weeks ago. Silva had said that Hull needed a “miracle”, but maybe they just need a new manager with new ideas honed somewhere you cannot reach on the M62.

In truth, Hull’s first half-hour against Bournemouth was disjointed and there were few hints of the revival that was to come, but eventually Mason (sidelined by Phelan) got on the ball in the centre of midfield, Hull began to use their width and Abel Hernandez proved that he can be an effective striker if you dare to push somebody – in this case, Robert Snodgrass – alongside and sometimes beyond him. It’s almost like knowing how to win football matches might at least as important as knowing the Premier League.

There is of course an awful long way to go in this relegation battle, but Hull are now level on points with 17th place and it feels like ‘success’ is possible, if far from probable.

“It’s manna from heaven for him, with this CV, to be given a job like this,” said Thompson last week. We suspect that it’s Hull who are feeling pretty bloody lucky right now.