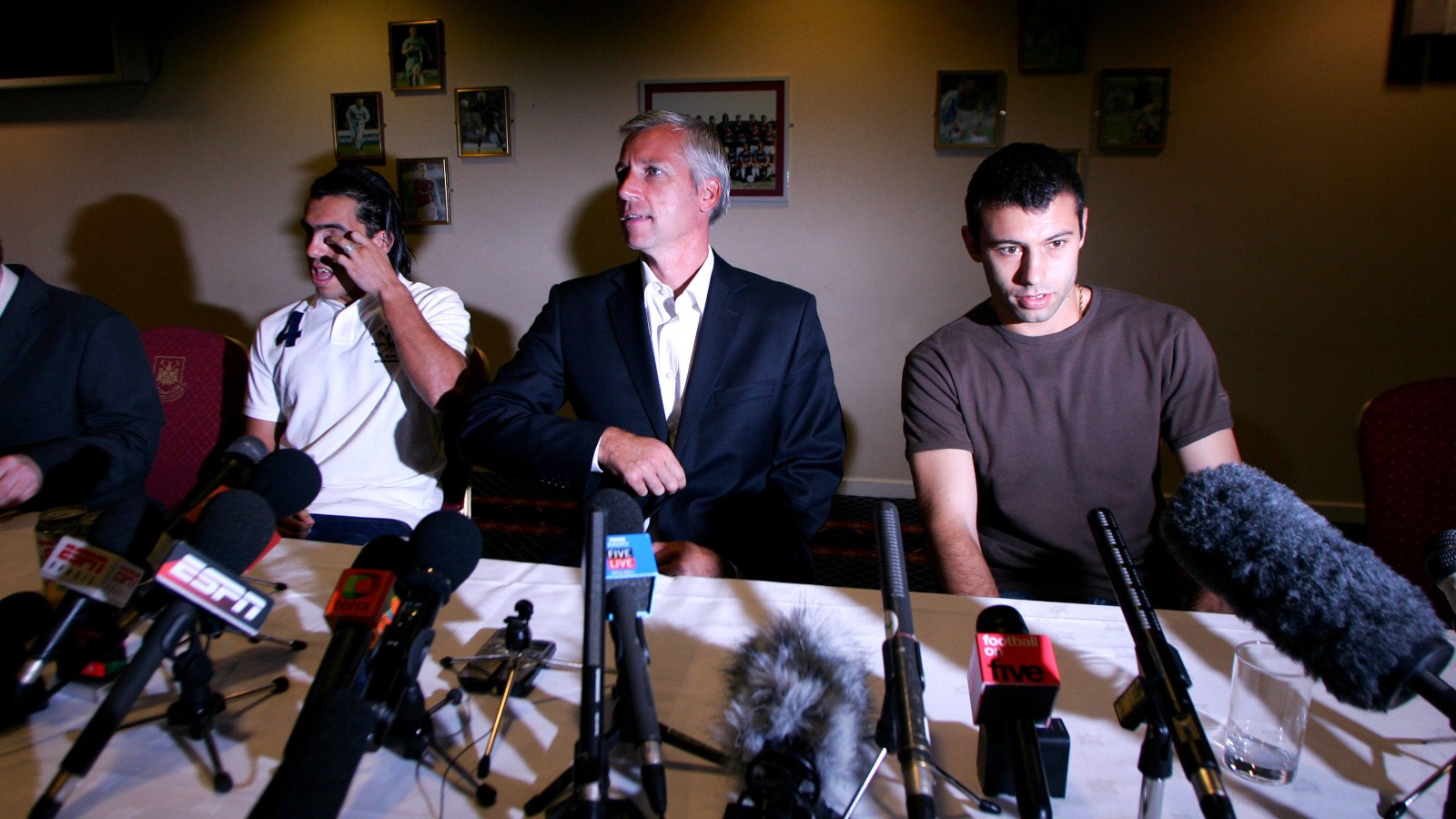 A Tottenham defender and a couple of Man Utd stars look good bets to crash this list in the not-too-distant future. For now, here are the top 10 Argentineans…

10) Esteban Cambiasso (Leicester)
Leicester certainly wasn’t the obvious destination for the Argentina midfielder when he left Inter Milan after 10 years at the San Siro, where he won five Serie A titles and the Champions League. And prior to that, he had two seasons at Real Madrid alongside Zinedine Zidane, Ronaldo, Roberto Carlos and David Beckham.

Cambiasso scored the goal that started Leicester’s great escape, an opener against West Ham that prompted seven wins and a draw from their final nine games. His contribution was enough to earn him the Fans’ Player of the Year award.

9) Emi Martinez (Arsenal, Aston Villa)
The only goalkeeper on this list is Argentina’s current No.1. Palace fans, perhaps justifiably, will be screaming for the inclusion of Julian Speroni, while Manchester United supporters would vouch for Sergio Romero’s bench-sitting qualities. But we’re going for the Villa stopper since he has emerged as one of the Premier League’s best stoppers.

Top 10? Apparently not right now. He got bogged down at Villa last season but that was a reflection of the impeccably high standards he set the previous campaign, when he was one of the league’s very best. Despite struggling to hit those heights again last term, he still remains undisputed first choice for club and country.

Had Arsenal not taken the safe option, selling him and keeping Bernd Leno, rather than trusting the stopper who won the FA Cup in his last game for the Gunners, then he would probably be No.1 at the Emirates right now. Which would have saved them the £30million they spent on Aaron Ramsdale – a very similar keeper to Martinez in terms of style and character. But Arsenal seem pretty content with their choices and Martinez has thrived with the responsibility of being first pick at Villa Park

So went the ditty from Newcastle fans to their captain to the tune of Can’t Take My Eyes off You by Frankie Valli, as Coloccini was leading the club to fifth place in the Premier League under Alan Pardew. Never one for understatement, in 2012 Pardew compared Argentinean to Bobby Moore. Of course he bloody did.

Coloccini stayed for nine years on Tyneside, and only six players have made more appearances for Newcastle in the Premier League: Shay Given, Alan Shearer, Shola Ameobi, Rob Lee, Nobby Solano and Gary Speed. That list is a who’s who of Newcastle cult heroes. Even if the ending went sour – Coloccini demanded to leave on two occasions – it does not diminish the excellence.

6) Jonas Gutierrez (Newcastle United, Norwich City)
There are more talented players than Gutierrez on and off this list, but few foreign imports bought into the ethos of their club and ingratiated themselves with supporters quite like him. The passion that exists within Argentinean football culture lends itself to cult hero status. Two notable examples are still to come, but Gutierrez rivals them by that measure.

If Gutierrez’s determination, desire and heart cemented his legendary status at Newcastle, his farewell was the stuff of folklore. In June 2013, Gutierrez was diagnosed with testicular cancer after discovering a tumour. He stepped away from the game and had surgery in October 2013. Upon his return to St James’ Park, opportunities in the first team were limited and he went on loan to Norwich to play under his former manager Chris Hughton.

Returning to Newcastle for 2014/15, Gutierrez finally made his first appearance back in the black-and-white in February, and it soon became clear that he would leave that summer. On the final day of the season, with Newcastle needing to beat West Ham to ensure their Premier League survival, Gutierrez was surprisingly picked to start. He assisted the first goal and scored the second in a 2-0 win, and broke down in tears after his finish secured safety. From surviving cancer and chemotherapy to surviving relegation in seven months.

5) Nicolas Otamendi (Manchester City)
He has been gone two years but the mystery rages on as to whether Nicolas Otamendi was an excellent defender prone to occasional calamity or a calamitous defender prone to occasional excellence. John Stones (205), Gerard Pique (183), Carles Puyol (164) and Aymeric Laporte (162) are the only centre-halves to make more appearances under Pep Guardiola than the Argentinean (161), which counts for something even if the perennially looming presence of Dmytro Chyhrynskyi undermines everything the Manchester City manager thinks about that position.

Otamendi, to be fair to him, won two Premier League titles and a further seven domestic trophies in five seasons at the Etihad, also receiving a PFA Team of the Year nomination. His departure as a separate part of the deal which saw Ruben Dias join Manchester City was necessary, but Guardiola will always look back fondly on his years coaching “an incredibly nice guy”.

4) Pablo Zabaleta (Manchester City, West Ham)
The right-back joined Manchester City just a day before the club was taken over by Sheikh Mansour. Alongside captain Vincent Kompany, he was one of the only players to survive and thrive though the entire subsequent Eastlands revolution.

During nine years at City, the Argentinean became an adopted Manc. He and Robinho – the last signing of the Thaksin Shinawatra regime and the first buy of the new one – made their City debuts on the same day but that is where the similarities end. Zabaleta threw himself into the club and the city; Robinho didn’t even realise there was more than one club in Manchester.

During 333 appearances, Zabaleta played a consistent role in City’s transformation from a cash-strapped mid-table rabble to one of the continent’s finest teams and most ambitious clubs. The right-back won every domestic trophy before leaving on his own terms in 2017. He moved on to West Ham and improved his record as the South American with the most Premier League appearances ever, but as the song suggests, at City, Zabaleta will always be “the f**king man”.

3) Javier Mascherano (West Ham, Liverpool)
The Argentina midfielder looked as shell-shocked as the rest of us when he was being paraded alongside Carlos Tevez by Alan Pardew upon moving to West Ham in a murky deal with Corinthians in 2006. He looked no more comfortable on the pitch at Upton Park; it took a matter of weeks for Argentina coach Alfio Basile to tell the midfielder to get out of West Ham “as soon as possible”.

Liverpool were more than happy to oblige and Mascherano’s relief was obvious in his performances. Rafael Benitez, rarely one to lavish praise upon anyone, labelled the midfielder “a monster of a player”, having already told him that none of Liverpool’s midfielders, not Steven Gerrard nor Xabi Alonso, “have your quality”.

Mascherano was certainly different to Gerrard and Alonso. While both were more creative and dangerous in attack compared to the Argentine – who scored one goal in three-and-a-half seasons at Anfield – every midfield needs a ball-fetcher. Mascherano established himself as the best dog around.

When Rafa went, so too did Mascherano. And it was then he demonstrated more strings to his bow, becoming Barcelona’s starting centre-back while winning five league championships and two Champions League titles. It was a far cry from failing to get a start ahead of Hayden Mullins.

2) Carlos Tevez (West Ham, Manchester United, Manchester City)
A brilliant centre-forward perfectly designed for Premier League life, Tevez became as famous for his exits from each of his three English clubs as his goalscoring excellence at them. It started strongly at West Ham, where he saved the club from relegation, fell foul of third-party ownership rules and then announced a move to Manchester United despite the Hammers still claiming the rights to his contract. An out-of-court settlement between Kia Joorabchian’s agency MSI and the London club eventually stopped the deal from going to the High Court.

His initial two-year deal at Old Trafford was a loan agreement, which United eventually attempted to make permanent after his second summer. However, having previously expressed his disappointment in public at the lack of clarity over his future and occasionally being on the bench, Tevez risked Sir Alex Ferguson’s wrath and signed instead for newly-rich Manchester City.

In December 2010, 18 months after joining City, Tevez handed in a transfer request after falling out with a number of individuals at the club, not least manager Roberto Mancini. The request was denied, with City threatening to sue Tevez for breach of contract if he refused to play. That summer he stated that he would never return to Manchester, and yet he remained for 2011/12 season. That included the farcical situation where he refused to come off the bench against Bayern Munich in the Champions League. Amazingly, he stayed at City for four years before joining Juventus.

He did also score 114 goals in England, with a nine-trophy haul including a Premier and Champions League double as a crucial part of Manchester United’s 2007/08 team, as well as a shared Golden Boot in 2011. Decent player, him.

1) Sergio Aguero (Manchester City)
“You’ll never see anything like this ever again!”

Aguero gave us the most dramatic moment in Premier League history, but it was his consistency that gave a different meaning to that line of iconic commentary: we’ll never see anything like him ever again.

Their greatest ever scorer bowed out on 260 goals and sits fourth in the all-time Premier League list, with Dwight Yorke in 18th the next non-European. He reached double figures for goals in every campaign but his injury-hit last, which at least culminated in him breaking Wayne Rooney’s record for the most goals scored at a single club. His rate of a goal every 108 minutes is ludicrous in any context, but particularly when noting that Thierry Henry is a distant second with one every 122 minutes.

Leaving the basic numbers aside, Aguero established himself as the complete striker, capable of scoring goals of all types from all ranges. Any accusations that he was simply a goal poacher were thoroughly debunked by his ability to embed into a fully-functioning Guardiola team. He was a phenomenon.

Read more: Ranking the Premier League clubs on how badly they are affected by the World Cup