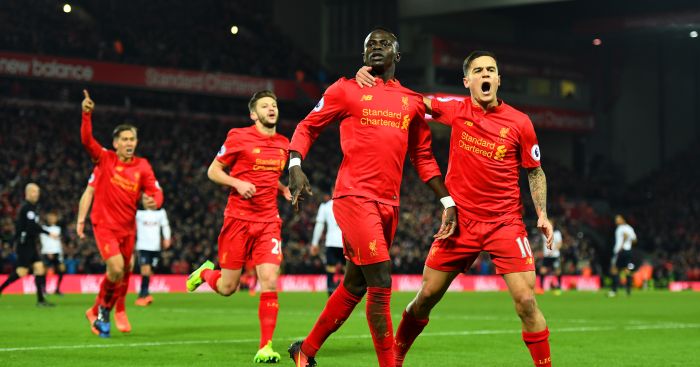 Premier League player – Sadio Mane (Liverpool)
My God, Liverpool missed him. Admittedly, he was given a helping hand by a Spurs defence that looked as if it had been on the p*ss all afternoon, but Mane would have given any back four a problem with the pace and movement which tormented poor Ben Davies, who is still lying down in a darkened room. Mane’s two goals got Liverpool back on track after a wretched January. Let’s see if they stay on it…

Football League player – Aiden McGeady (Preston)
The winger scored two stunning goals from outside the box in either half as North End came from behind to beat Brentford 4-2 at Deepdale and end a run of six straight defeats to the Bees. McGeady also laid on the hosts’ second, with a fine low, in-swinging delivery from the left that took out the hosts defence and provided Callum Robinson with an easy finish.

European player – Kylian Mbappe (Monaco)
The 18-year-old scored his second hat-trick of the season to restore Monaco’s lead at the top of Ligue 1 to four points after PSG had won on Friday night. He’s not the first young Frenchman to be called ‘the new Thierry Henry’ but this time, there might be some credence to that label…

There were plenty to pick from, but @NorwichCityFC's Jonny Howson wins it.

Best pass – Georginio Wijnaldum (Liverpool)
Wijnaldum, like Liverpool, was on it during the first-half demolition of Tottenham. His backheel into the path of Adam Lallana before half-time showed how much he was enjoying himself, though his most decisive contribution had already been made when he set up Mane’s opener with a brilliant split pass, dug out from under his feet, that was perfectly weighted for the forward’s diagonal run.

Best save – Ben Foster (West Brom)
The Burnley fan with wrists of steel who diverted Ashley Barnes’ wayward shot off course from a direct hit on his three-year-old son’s nose deserves a nomination, but Ben Foster takes this, for quantity and quality of saves at West Ham. The West Brom stopper clawed away Robert Snodgrass’s in-swinging free-kick in the first half when he appeared to have been beaten; he got down to Lanzini’s low effort for an angle later on; but the best of the lot – tipping another Lanzini drive onto the bar – was followed up by Sofiane Feghouli, who pounced on the loose ball to equalise. Such is life for a keeper.

Best tactical move – Burnley’s 6-2-2
Burnley’s answer to Chelsea’s shape was hardly innovative or sophisticated but the planning paid off and showed again why 4-4-2 isn’t dead. Admittedly, it was more like a back six when Chelsea were in possession, but aside from a ropey opening 10-15 minutes, when Joey Barton and Ashley Westwood were boxed in by Kante, Matic, Hazard and Pedro, the Clarets denied Chelsea’s flair players the time they were so graciously afforded by Arsenal last week. Forcing Chelsea to go long in the second half, Burnley’s centre-halves were more than a match for Diego Costa and restricted the leaders to not a single shot on target after the break.

Worst tactical move – Gray and Vardy up front
You can’t blame Claudio Ranieri for trying something different, given Leicester have yet to score a single goal in the Premier League this year, but sticking Demarai Gray through the middle with Jamie Vardy just didn’t work. Gray scored a scintillating goal coming off the left in the FA Cup against Derby last week, and it was from there again that the winger had more joy in the second half at the Liberty Stadium, but by then the damage was done.

Premier League loan player – Tammy Abraham (Bristol City)
A few days after being summoned for careless driving, driving without a licence and driving without insurance, the Chelsea loanee motored through the Derby defence, bagging a brace, taking his season’s tally up to 21, as City steered three past the Rams before the break. A second-half collapse made the draw feel like a defeat for City, but they’ll take huge encouragement from Abraham and Matty Taylor’s first appearance as a strike partnership.

“I was just being clever,” Veltman told Dutch outlet Metro. “What I would have done in a situation like this? I always wait until the ball is out of play. I would not be standing there and looking behind me. That was not the brightest thing to do.

Some sportmanship. Like Joel Veltman's explanation to Metro: "I can laugh about it. It was just a ruse." Err… pic.twitter.com/T6Ex1v2iYg"

Dembele of the week – Aliou Dembele (FC Niort)
The 29-year-old bossed the middle of the park (probably) on Friday night as captain of FC Niort as they came from behind to defeat second-placed FC Troyes in Ligue 2.  Allez, Aliou.

Not so cunning plan of the week – David Moyes
While defending Sunderland’s jolly to a wintery New York City this week following their thrashing at the hands of Southampton, Moyes explained the choice of destination:

“The big thing for me is to create a team spirit so they look after each other on the pitch – and the psychology behind going somewhere so cold is that when we come back we’ll think Sunderland is Dubai.”