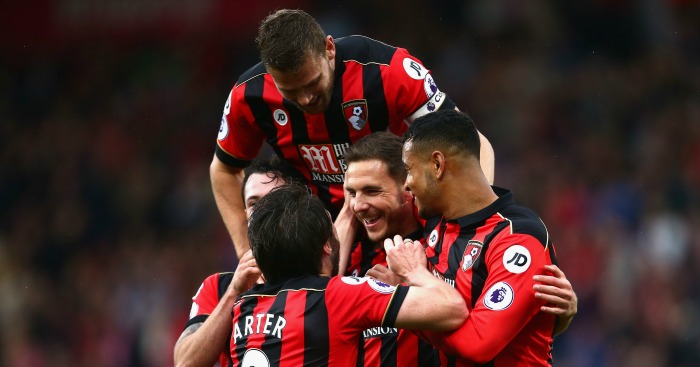 Premier League player – Junior Stanislas (Bournemouth)
Back in 2008, a West Ham-supporting friend of mine told me to look out for the performances of a young winger who would soon be the latest player to emerge from the club’s inexhaustible pool of youth talent. Eight years, one loan move and two transfers later, and it turns out he was exactly right.

Junior Stanislas’ journey to become a Premier League regular has been an unorthodox one, but in Bournemouth he finally has the perfect team to realise his potential. The 26-year-old scored twice and assisted another of the Cherries’ six-goal haul against Hull on Saturday, and was a deserved man of the match. He now has three top-flight goals in eight games, already equalling his best-ever goalscoring season. He was also one of our Premier League winners of the weekend, and there is no greater honour in this business.

Football League player – Jonjo Shelvey (Newcastle)
He could hardly expect to receive higher praise from a manager who has enjoyed such success in the game. “We analyse the characteristics of our players and here we have a player who we know has it in him to deliver the final pass,” said Rafael Benitez after Newcastle’s 3-1 win over Brentford on Saturday. A coach who has won the Champions League, and La Ligas, as well as managing some of the finest talent in the world, was discussing one Jonjo Shelvey.

Must admit I wasn't sure Shelvey would have appetite for season in the Championship. But he looks really motivated. Easily best in division

“Jonjo is a player who is technically good and, when he plays well, the team plays better,” added the Spaniard. It is no coincidence that Shelvey played rather well both during that Brentford win on Saturday, then in the 2-0 victory over Barnsley three days later. Dwight Gayle scored twice in either fixture, but it was the former Swansea midfielder and England international who shone for the Magpies. He completed 127 passes across both fixtures, at least 38 more than any other Newcastle player, as they rose to the top of the Championship. They will take some budging.

European player – Yannick Ferreira Carrasco (Atletico Madrid)
Granada could hardly believe the position they found themselves in. La Liga’s bottom club had taken the lead against its leaders in the 18th minute. It was only the third goal Atletico Madrid had conceded in all competitions so far this season, and only the second time they had trailed in any game. The first instance was against Barcelona.

Then Yannick Ferreira Carrasco happened. The Belgian winger equalised in the 34th minute, put Diego Simeone’s side in front just before half-time, completed his first-ever career hat-trick in the 61st minute, then assisted two further goals in Atletico’s 7-1 comeback win.

Best goal – Mesut Ozil (Arsenal)
Sure, Jose Holevas’ long-range effort for Watford against Middlesbrough was wonderful. Granted, Romelu Lukaku’s strike against Manchester City was a lovely display of individual excellence. Fair enough, the game between Liverpool and Manchester United was a ruddy goalfest. But none were quite as crisp and endearing as Mesut Ozil’s eventual winner for Arsenal against Swansea.

The sheer beauty in the German’s strike is that he could have brought down Alexis Sanchez’s clever assist. Having fought through the wafer-thin paper bag that was Swansea’s offside trap he could have squared it for a teammate to finish off the move, or even head or tap the ball beyond Lukasz Fabianski to score himself. Instead, Ozil elected to unleash a thunderbastard into the roof of the net. It was a finish as emphatic as it was excessive and hilarious. But it looked great.

Best save – Tom Heaton (Burnley)
Pele and Gordon Banks? Pah. Give us Tom Heaton diving to his left to claw away a goal-bound Charlie Austin header any day.

An honourable mention too for Gianluigi Buffon, who continues to prove that, even at 38, he is still one of the best goalkeepers around. The second save here is ludicrous.

This is not a completion of Buffon's best saves ever! it is a Buffon's saves in 1 game ? #OLJuve #Buffon #CL #juventus #FinoAllaFine pic.twitter.com/jCgO9zG7t8

Best performance – Bournemouth
Six goals (a Premier League best), 22 shots (a Premier League best, and double the amount of shots as Hull), more than double the shots on target as their opponents, and five different goalscorers, each of them Englishmen. There were times when Bournemouth sliced through an admittedly lacklustre visiting side with ease, efficiency and effervescence; they look at home at this level. Eddie Howe, 38, continues to make a mockery of every time Tim Sherwood, 47, is referred to as ‘one of England’s brightest young managers’. The Bournemouth boss looks destined for one of the top jobs in the country, and for good reason.

That assist from Chalobah ? https://t.co/PaROu6fQ1k

That is, quite simply, wonderful. It seems that Chalobah certainly learned something during his loan spell at Watford/Nottingham Forest/Middlesbrough/Burnley/Reading/Napoli. (Delete as applicable)

Best tactical move – Slaven Bilic (West Ham)
Just as a tactical switch to a system with three central defenders has spared Antonio Conte at Chelsea, it might have rescued Slaven Bilic’s job. At the very least, it has made his position at West Ham more secure for the time being.

The East London side travelled to a revitalised Crystal Palace on Saturday as an undeniable underdog, but escaped Selhurst Park with their first Premier League victory since mid August. A defence of Winston Reid, Angelo Ogbonna and Cheikhou Kouyate is enough to occupy any striker, and so it proved for Christian Benteke.

But it was the return of Aaron Cresswell, ever so harshly sent off late on for a second bookable offence, which instigated only a third league victory of the season. His inclusion at left wing-back makes West Ham look a different side. They still sit in a lowly 15th place, but this was a crucial step in the right direction.

Worst tactical move – Claudio Ranieri (Leicester)
On this day last year, Jamie Vardy was in the midst of his remarkable Premier League goalscoring run, one which would eventually culminate in an individual record to supplement team glory. He had skittle vodka, port and Red Bull’d his way to scoring in six consecutive games; it would become 11 by the end of November.

Fast forward 12 months, and Vardy is on another goalscoring streak, and this one is just as reflective of Leicester’s form as his own. The 3-0 defeat to Chelsea witnessed the 29-year-old’s fourth straight Premier League game without a goal, and his eighth in all competitions.

“Jamie is going through a goal drought and is not going to get out of it by sulking, because that is what he looks like he is doing at the minute,” said Alan Shearer last week. “He is not doing what he did last season and causing defenders enough problems. He is making it easy for them. There is a lack of effort there.” Such words would prove prophetic against Chelsea, where he was a shadow of his former self.

Manager Claudio Ranieri provided a probable cause, however. “Shearer was a fantastic scorer but if he’s talking about the Chelsea game then I told Jamie to stay with David Luiz – and only him. I wanted to counter and leave him with Luiz so it’s not his fault – maybe it’s mine!”

What ensued was a terrific performance from Luiz, and a game in which Vardy enjoyed 27 touches, registered one shot, and completed 17 passes. If only every game was in the Champions League.

Premier League loan player – Samir Nasri
Few statistics can ever claim to surprise and inform in this era of oversaturation, overexaggeration and overexposure, but the revelation that Samir Nasri attempted more passes in a Champions League game than any other player since 2005/06 – Xavi aside – was quite the treat. The Frenchman was cast aside by Pep Guardiola in the summer, landing at Sevilla. He has impressed thus far in Spain, but this past week has been his best yet.

Nasri attempted 158 passes in the 1-0 win over Dinamo Zagreb, in which he also scored the only goal. It followed his goal in the 3-2 win over Leganes at the weekend. The 29-year-old must already be looking forward to winning the Europa League come May.

Turnaround of the week
It did not take long for Aston Villa fans to chant Steve Bruce’s name. The former Hull manager was an unpopular choice for many to replace Roberto Di Matteo, owing to his past with Birmingham. But all that was forgotten come Tuesday evening. All it took was a first away league victory in 437 days.

When Jordan Ayew dispatched a last-minute penalty to seal a 2-1 win over Reading, he ended a wait of well over a year for travelling Villans to witness a victory. It was against Bournemouth on the opening day of the last Premier League season when they had last earned three points away from home. The club has been through five managers since.

Overhead kick of the week

There is only one David Luiz, never change. ? https://t.co/onzKfbVjnj

We do worry about him.

Dembele of the week – Siramana Dembele
Ousmane put up some competition by assisting Borussia Dortmund’s only goal in the 1-1 draw with Hertha BSC, while Garra narrowly misses out this week despite his strike for FC Solothurn in their 2-0 victory over FC Wangen bei Olten in the Swiss fourth tier. Messrs Moussa and Mousa have not quite done enough to take the mantle, and the Department of Dembeles is expected to rescind Bira’s membership, considering he played a full 90 minutes for a Barnet defence which conceded four goals.

It is Siramana who holds bragging rights over each of his namesakes on this occasion, with the former defensive midfielder turned Braga assistant manager inspiring a 3-1 cup win over Oliveirense on Saturday. He will be hoping to do the same in their next league fixture, where they face a bunch of Chaves.