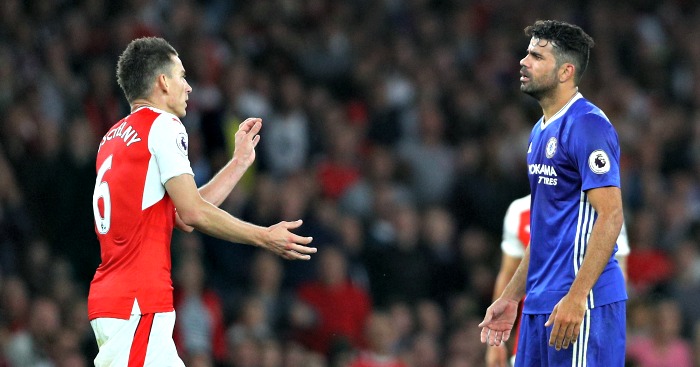 Game to watch – Chelsea v Arsenal
When Antonio Conte conducted his post-match press conference after Chelsea’s draw against Liverpool in midweek, he oozed calm and balance. His public persona is often the Dr Jekyll to the passionate, temperamental Mr Hyde we see each week in the dug-out. He delivered his message with precision, not a single word wasted as he praised his side’s “personality” in securing a crucial point. Then discussion turned to Arsenal.

“Don’t forget that in the previous game we lost 3-0 away,” Conte began, as his mood noticeably changed, “and I think this could be a good chance for us to show that now in the second part of the season we are a totally different team if you compare the previous game.” Make no mistake: Chelsea want blood on Saturday at Stamford Bridge.

The Blues have lost three Premier League games this season, and have exacted a measure of revenge for two of them. The draw with Liverpool extended their lead at the top of the table, keeping the Reds at arm’s distance after being beaten by Jurgen Klopp’s side in September. And although Tottenham ended their record winning run in January, Chelsea had already beaten them at Stamford Bridge. But Arsenal? The 3-0 humiliation they inflicted upon the current league leaders remains a sore point.

It was during that defeat that Conte first experimented with the 3-4-3 formation, and Chelsea have not looked back since. They have won 15 and drawn one of their subsequent 17 league games, scoring 37 goals and conceding just seven. The loss to Arsenal had left them eighth in the table, one place behind Crystal Palace.

That victory put the Gunners in third, and it is testament to their consistency that they reside there five months later. But to paint that as a success would be to mislead: The mood is at an all-time low after yet another title challenge is threatening to fall by the wayside. Losing 2-1 at home to a Watford side who hadn’t won in seven league games was unacceptable, but the performance was almost unforgivable. A response is desperately needed.

Of course, Arsene Wenger’s first port of call will be to ensure his players are “mentally prepared”. Every mistake will be punished, every misstep will be exploited, every lapse in concentration could end their title hopes and place their top-four contention in jeopardy. And the Arsenal manager would be powerless; he will be sat with the Chelsea fans as he serves the third game of his four-match touchline ban.

The old adage goes that any game is won in midfield, and so the Gunners will presumably arrive at Stamford Bridge with three points neatly wrapped for their hosts. Aaron Ramsey‘s absence will be celebrated by many a fan, but his replacement will either be inexperienced in the position or just plain inexperienced. Wenger will surely not take the risk of starting Ainsley Maitland-Niles in such a fixture, and so the honours are likely to fall to Alex Oxlade-Chamberlain. As impressive as he was against Southampton in the FA Cup, facing Harrison Reed and Pierre-Emile Hojbjerg does not prepare anyone for 90 minutes of chasing N’Golo Kante’s shadow. The Chelsea midfielder has two pockets, and Francis Coquelin will only fill one of them.

Conte was insistent earlier this week that positive results against both Liverpool and Arsenal would not render the title race over, but with Chelsea already enjoying a sizeable gap before all but one competitor tripped themselves up in midweek, a home win on Saturday would see them within reach of the finish line in February. As for the Gunners, they could well be fifth by Sunday afternoon. I genuinely fear for the capacity of the internet to cope with the fallout.

“They never actually told me why I wasn’t playing. It could be because I didn’t sign a new contract.”

Recent revelations go some way to explaining just why Saido Berahino’s last competitive appearance for West Brom came in September, but the 23-year-old does not have to wait long for an opportunity to prove his detractors wrong. Such are the quirks of fixture list fate, the striker’s first away game for his new club will come against his old one.

The full story of Berahino’s rise and demise at The Hawthorns is not likely to be fully explained by all parties, but the short version is thus: He joined aged nine, progressed through the development ranks, scored plenty of goals, sought a move to a bigger club, was dropped, then failed to recapture his finest form. This is a player who scored 20 goals the season before last, but just once in his last 29 Premier League games.

The 23-year-old will remain forever grateful to West Brom for the chances he was afforded, but his priorities now lie with Stoke. The Potters have recaptured ninth place, and they are not prepared to give up that position without a fight.

Team to watch – Tottenham
Fourteen shots and 72% possession but zero goals meant one disappointing point for Tottenham against Sunderland in midweek. Mauricio Pochettino’s side had responded to defeat to Manchester United in December with six consecutive Premier League victories, but their last two games have seen their deficiencies exploited. They battled back to secure a valiant draw with Manchester City a fortnight ago, but failing to breach a defence whose only prior league clean sheets had come against Watford and Hull will sting.

It was Tottenham’s eighth draw of the Premier League season; only two sides have managed more. Both Manchester United and Middlesbrough have drawn nine games this campaign, and the latter await at the weekend. Boro have conceded fewer goals than all but five teams so far, but Pochettino’s side will look to exorcise their demons with an emphatic win.

It is a statistic as hilariously specific as it is damning of the Manchester United manager. The accepted wisdom in media circles is that Jose Mourinho has returned the club to their former glories. The rest of us are staring at a Premier League table that has had them in sixth since the first game of November and wondering what we’re missing.

The Duncan Castles among us will claim that United are unbeaten in the Premier League since October, and are the only English side still in four competitions. The realists will point out that they have drawn seven of the 14 games in their current unbeaten run, that they were beaten by Hull in the EFL Cup, and that they haven’t actually enjoyed a positive performance for a number of weeks. They were uninspiring against Marco Silva’s side in the Premier League, and are now four points off the Champions League qualification pace.

Mourinho chose to discuss standards after the game, but only of the ‘double’ and ‘referee’ variety. What he neglected to mention is that United’s own standards have slipped: Sitting in sixth after a summer spend of £149.6m can only be portrayed as a success for so long. Anything less than a win away at struggling Leicester, and there will be no-one left to blame but the manager himself.

One-on-one battle to watch – Jose Fonte v Shane Long
Remember when Jose Fonte left 12th-placed Southampton to join 11th-placed West Ham, only one of whom will take part in a major Wembley cup final this season? Shane Long remembers. And do you remember when Jose Fonte conceded a penalty and was run ragged on his Hammers’ debut against Manchester City? Shane Long remembers, and will do his utmost to mirror the livewire, electric performances of Gabriel Jesus, Raheem Sterling and Leroy Sane on Saturday.

Where is Mike Dean this week?
Wirral’s most famous son will ensure the players and the match are the focus of attention when he referees Manchester City’s clash with Swansea on Sunday. But before that, he will spend the afternoon being shouted at by an angry German man with really bad teeth; he is the fourth official for Hull against Liverpool.