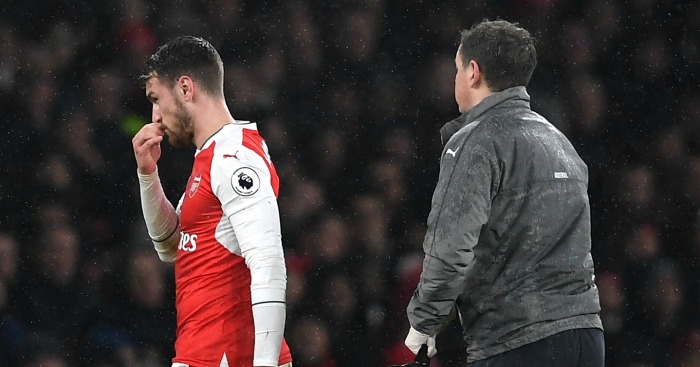 ‘The bad news keeps coming as we’re forced into an early change…’ read the tweet from Arsenal after 19 minutes. The responses to Aaron Ramsey’s substitution were brutal and largely on a theme of ‘bad news?’ Many Gunners – because this is Twitter and it is mental – expressed hope that the Welshman was either very badly injured or very much on his way to China.

At the Emirates, the reaction of the fans was similar: Fans openly cheered the exit of Ramsey and the introduction of Alex Oxlade-Chamberlain, whose reward for excellence in central midfield on Saturday was of course a place on the bench on Tuesday night.

Daniel Storey asked on Monday ‘what Oxlade-Chamberlain’s display means for Aaron Ramsey, who has drifted again this season’, but we once again underestimated Arsene Wenger’s misguided loyalty. It’s not quite as ridiculous as keeping the Premier League’s best right-back on the bench and keeping faith with Gabriel, or not even putting Danny Welbeck on the bench, but picking Ramsey – whose form has been patchy for the best part of three seasons – ahead of The Ox looked like a mistake on paper and proved to be so in 19 disastrous minutes.

It continues to confound that Jack Wilshere is on loan at Bournemouth while Ramsey is starting games for a team with delusions of a Premier League title challenge, but this is a club that recently gave Francis Coquelin a new long-term contract and thought a man with a compulsive red card habit was worthy of ‘third most expensive central midfielder in the history of football’ status.

Ramsey’s was not the only name on a list of pathetic first-half Arsenal performers on Tuesday night, but he was the man whose half-arsed attempt at a block simply diverted Younes Kaboul’s free-kick past Petr Cech for 1-0, and he was the man who failed to control Gabriel’s throw-in and looked sluggish in making almost no attempt to get back and prevent Watford making it 2-0. In total, his 19 minutes featured one trademark, long-distance, off-target shot, no tackles, no interceptions and one injury cheered by his own fans.

It's laughable Ramsey thinks he is better than this club. He's been championship level for all but one season

There was a juncture – pre-Mesut Ozil and pre-Alexis Sanchez – when Ramsey was one of Arsenal’s most valuable assets (and his performances for Wales in the summer showed he can still thrive when he is the second-biggest fish in a small pond) but his form and fitness have both been fragile for so long that it feels, even at 26, like his best years are so far behind him that the rear-view mirror shows only dust and regret.

In an embarrassing 3-3 draw with Bournemouth in January, we saw Ramsey pointing at an opposition player in acres of space rather than making any attempt to cover the ground to make a tackle, and we wondered how Arsene Wenger could continue to pick him in central midfield. Some may argue that the Frenchman increasingly has little option, with Mo Elneny on international duty, Francis Coquelin a walking, talking, fouling liability, Santi Cazorla injured and Xhaka only ever one brainfart away from suspension, but Oxlade-Chamberlain had given Wenger an alternative with his performance against Southampton; he chose to ignore it.

You might think that the one thing he cannot ignore is thousands of his own club’s fans standing to cheer an injury to one of their own players. That we would not be entirely surprised if a new contract follows within the week is indicative of the culture of rewarding under-performance at an infuriating club.