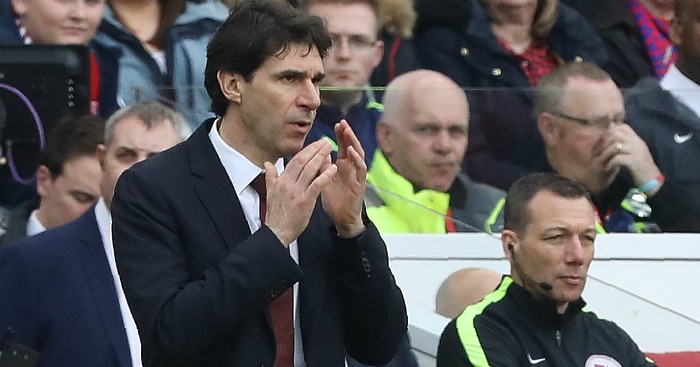 Aitor Karanka spoke on Friday of the “amazing situation” Middlesbrough occupy. You can’t blame the manager for extenuating the positives, but 24 hours later, the picture on Teesside looks decidedly more gloomy.

The Boro boss’s point was that in context of recent years, fighting in the Premier League every week with a chance of going to Wembley for a semi-final represented substantial progress. Indeed. But that progress is in severe danger of being reversed in the coming weeks.

The process has already started. Karanka was glad of the break from the Premier League given just how wretched his side have been in recent weeks. Last Saturday’s surrender at Stoke was the low point of a 2017 that has yet to bring a league victory. Since beating Swansea on December 17, Boro have lost five and drawn six.

They haven’t been thrashed, but there’s little consolation to be taken from the fact that they have only been defeated by a two-goal margin twice in that run of 11 league matches. Today, though, it should have been a far greater beating.

Pep Guardiola took no chances, naming possibly the strongest XI he would have allowed himself with such a pivotal run of games approaching. Pleasingly for the City boss, his side won at a canter while avoiding any injuries from some fiesty Boro tackling as the game got firther away from the hosts.

That was really the only fight Boro offered. Karanka takes pride in organising his side to be hard to beat but they were cut open almost at will by the visitors.

After two dire away performances, the home fans would have been entitled to expect a fast start from a home side with a point to prove and plenty of critics to answer. Instead, Boro retreated into their shell from kick-off, allowing City to take control in the third minute, when David Silva took the chance Raheem Sterling failed to seize upon.

There was a brief flurry from the home side around the half-hour mark as Boro pressed City for the only time in the match. Remembering City are far from impenetrable, even if they have now kept six consecutive clean sheets on the road, Boro created a couple of headed opportunities, but Claudio Bravo was tested only once, and the heavily scrutinised keeper very nearly fluffed that examination.

That was the sum of their efforts, aside from another header from Fabio late on. But it was too little, too late. That has been Boro’s problem this term: a dreadful lack of creativity and potency in attack.

Karanka’s side have scored six fewer than the two teams below them in the Premier League, and 16 fewer than Palace and Swansea directly above them. They average the lowest shots per game in the division, and so too the lowest number of shots on target per game.

There is little sophistication in their attacking play. Karanka plays a big man up front, either Rudy Gestede or Alvaro Negredo, but both are starved of any service. Cristhian Stuani grafts on one flack, making Adama Traore Boro’s main threat. Sadly, the only thing predicatable about the youngster is that his final product will be dreadful, no matter how thrilling the journey to reach that point.

You can understand a pragmatic approach from Karanka. The mission this season is simply to survive and the first priority for any Premier League newcomer is to be hard to beat. But Boro offer no threat going forward. And given this was a cup tie, there was scope to be more adventurous.

When they were chasing the game, Karanka turned to Gaston Ramirez – a player seemingly so disillusioned, he almost phoned it in at Stoke last week before being hooked at half-time. Ben Gibson suggested not everyone was putting a shift in at the Bet365 Stadium and it wasn’t hard to see who he might have been refering to. The Boro fans certainly read between the lines, given Ramirez was greeted by some boos from the home supporters who could muster the enthusiasm to care by that point.

Given the importance of his defence, Karanka will be dismayed to see it being decimated by injuries. Daniel Ayala, George Friend and Calum Chambers were all on the sidelines today, and they were joined in the second half by Bernado Espinosa.

The defeat at Stoke and the manner of it led many Boro fans to suggest Karanka’s time was up. The Spaniard survived the week, and he may well survive the coming one too. But Manchester United arrive at The Riverside next week, and Steve Gibson will be scrutinising Boro’s response even more diligently than today.

After the United clash, Karanka is made vulnerable by a two-week international break which precedes three games in six days that will likely define Boro’s season. Gibson will have been looking for signs of life in today’s cup tie and he witnessed an entirely limp performance. If United find The Riverside as accommodating as City did today, then a change will most likely have to come before the pivotal meetings with Swansea, Hull and Burnley.