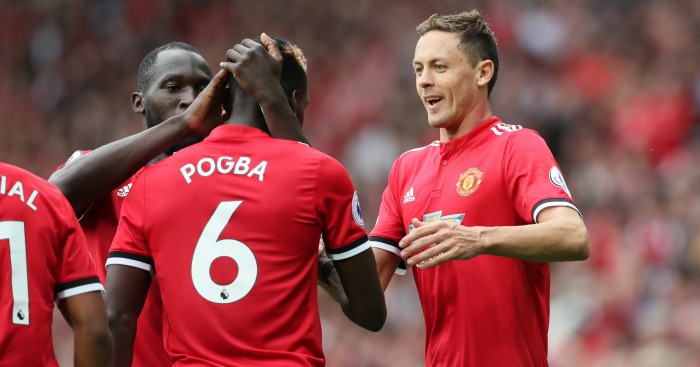 How quickly things can change. Three months ago, Ander Herrera was named as Manchester United’s Player of the Year, the emphatic choice of both his peers and the club’s supporters. He was considered the prime candidate to be Jose Mourinho’s next captain with Wayne Rooney’s departure looking probable. On Saturday, he spent his second consecutive Premier League game on the bench. The star of the show has quickly been pushed into the wings.

Not only was Herrera United’s fourth emergency service last season, but also their delivery driver. No player made more tackles or interceptions, but nobody managed more assists in the league either. He was the closest thing to N’Golo Kante in terms of work rate, stamina and central midfield impact. It is unthinkable that he would now be a spare part.

If Nemanja Matic’s arrival threatened Herrera’s first-team spot, few expected this eventuality. Matic may play in a similar starting position to Herrera, but their skill sets are very different. One is languid and calm; the other is United’s Duracell bunny. One is at his best when not noticed; the other might pride himself on the number of mentions in a match report.

In fact, it is Mourinho’s own tactics that have left Herrera searching for that round hole in which to insert his rounded game. Rather than operate with a midfield three of Matic, Herrera and Pogba with the Frenchman pushed further up the pitch, Manchester United’s manager has twice picked an adventurous team with four attacking midfielders or forwards ahead of Pogba and Matic. If the Serbian has struggled with that workload and responsibility, it certainly hasn’t shown.

In this attacking shape, Herrera is pitted directly against Pogba for a place. Of all United players to appear for more than 500 minutes in the league last season, the pair ranked one and two for touches of the ball (0.92 minutes per touch vs 0.94) and passes (1.18 minutes per pass vs 1.2). If this was the overlap of the Venn diagram between Pogba and Herrera, Herrera added the defensive actions and Pogba the attacking ones. With Matic added, Mourinho has more need of Pogba’s characteristics. Pogba has more space and time to flaunt them.

Mourinho has always intended to make his Manchester United side more free-flowing, despite his reputation as a pragmatic coach. Last season he blamed predecessor Louis van Gaal for a team playing with the handbrake on, insisting that it would take his dogs time to learn new tricks. In the first 180 minutes of the league season, United have had 38 shots.

1907-08 – Manchester United have scored 4+ goals in their opening two league games of a season for the first time in 110 years. Rampant. pic.twitter.com/EZcT1ZdZdW

That is not to say that Herrera is no longer persona grata in United’s first-team squad. He started only one of United’s first five league games last season before his introduction in the Manchester derby changed the game. From that point on Herrera was switched to a holding role in midfield and excelled.

In fact, Herrera may well become United’s big-game player; used in the Champions League and more difficult Premier League games when Mourinho will consider a free-flowing approach far too open. See his impeccable performance against Eden Hazard last season for the perfect example.

The key lies in understanding Mourinho’s pragmatism. It is not a synonym for defensive; nothing of the sort. Pragmatism is merely a technique of playing to your strengths, and United’s have changed.

Whereas last season United’s greatest strength was their defensive resilience (29 league goals conceded), now it is an attacking speed against weaker opposition. Unfortunately for Herrera, he was far more important to the former than the latter. You don’t need your marathon man when you’re hoping to win medals in the sprint races.