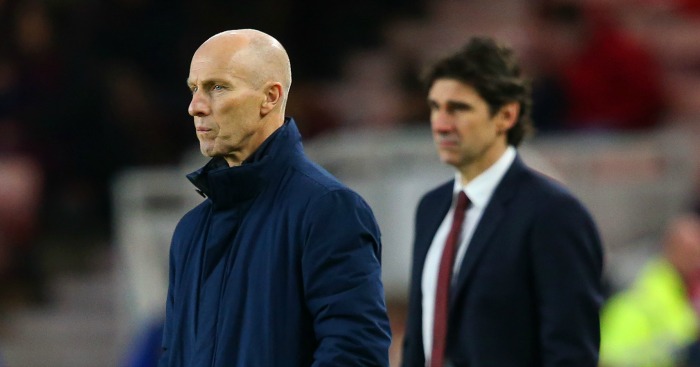 Is it Bob Bradley’s fault that his only three available Swansea centre-halves started a combined five Premier League games last season? Is it Bob Bradley’s fault that those three available Swansea centre-halves are aged 22, 24 and 24? No and again no. Should he have done better with the resources at his disposal, given than he presumably promised as much in an interview said to be incredibly impressive and detailed? The answer of the Swansea board to that final question will determine whether Bob Bradley remains Swansea manager past Christmas.

There’s no doubt that it’s gone badly at Swansea, but there is also no doubt that this team was ill-equipped for a Premier League campaign. Their captain and defensive leader was ‘replaced’ by two young players who had no experience at anywhere close to the highest level, while the scorers of 23 of their 42 league goals from last season are no longer at the club. They spent over £30m in the summer and only two of their signings – Alfie Mawson and Fernando Llorente – are currently in Bradley’s first team.

The Premier League team with the worst defence is always relegated, and right now Swansea undoubtedly have the worst defence – both in terms of statistics and the evidence of the bleeding eyes of anybody forced to watch them. Gylfi Sigurdsson can be incisive, Modou Barrow quick and Leon Britton wonderfully neat, but any and all work done elsewhere on the pitch is undermined when you have Jordi Amat in defence.

“We still feel we can use it [January] to improve our squad and discussions need to continue,” said Bradley earlier this week, but that was before Swansea had lost another two games and conceded another six goals. “The discussions have been consistent.”

Presumably Bradley has consistently said he needs help because this Swansea squad is nowhere near good enough. Whether the American stays or is replaced, that should remain consistent. The good news is that the situation can be rescued because they are somehow only three points from safety, but there is little hope of rescue unless the club invest in at least two defenders and at least two other outfield players; Wayne Routledge and Barrow should never be your best wide options in the Premier League.

Bradley’s future may well depend on what other options are available. Replacing him only makes sense if you can find a manager who has experience of rescuing this kind of situation, which means Sam Allardyce. But would he take that job when the far more attractive Crystal Palace could eventually be an option? And could Swansea offer the kind of wages Allardyce would demand? Former England managers with a 100% win rate do not come cheap.

It’s been five years since any Premier League side has conceded more goals than Swansea’s 37 after 17 games. Is that a reason for Bradley to follow Francesco Guidolin in being sacked or a reason to give their second manager of the season a team fit for purpose in this division? We await the answer, but with not quite as much trepidation as the beleaguered Bradley.