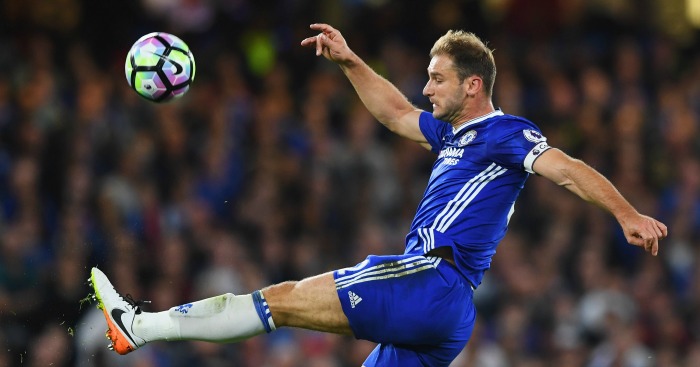 The clue is in a line from the Daily Telegraph’s Matt Law – a man with many contacts at Chelsea – earlier this month: ‘Ivanovic has less than 12 months to run on his existing contract and, despite his close relationship with Chelsea owner Roman Abramovich, now faces a tough task to convince Conte he is worthy of an extension.’

There’s an ‘ah’ moment right there: So that’s why a player whose form has descended into farce over the last three years has never once been dropped in that spell. Almost a year ago, we recorded a ‘new low’ against Porto, and yet here we are in another September and Ivanovic is still playing for a club with aspirations to win the title. Astonishingly, the last time that the blundering Serb started a Premier League game on the bench was April 2013; Friday night’s truly abysmal 90 minutes will surely usher in a long-overdue change.

According to that piece by Law, Antonio Conte originally wanted only a centre-back to boost his defence but, after a few weeks working with his Chelsea squad, he changed his mind. And that’s how former Bolton and Sunderland defender Marcos Alonso was suddenly a £23m Chelsea left-back. The plan is simple: Bring in Alonso, move over Cesar Azpilicueta and send Ivanovic to the bench, where his almighty arse can sit until Conte needs a fourth-choice centre-half or a second-choice right-back. You can imagine the conversations Conte must have had with emissaries of the club’s Russian owner: Sorry, but if you want to win the title, we must address the elephant in the room.

Against Liverpool on Friday night, Ivanovic looked like a desperate man losing any remaining grip on his status as a Premier League footballer. He blundered awkwardly into needless fouls, spitefully stood on Adam Lallana, moved his legs slower than any elephant in any room and watched helplessly as Liverpool selfishly passed and moved around him as if conspiring with Conte to underline his point. See…he can’t work with this.

Perhaps John Terry’s absence prolonged Ivanovic’s stay of execution on Friday night. Perhaps Conte was waiting for the kind of evidence that even a good friend cannot ignore. This was surely that evidence and a League Cup clash with Leicester on Tuesday will give Conte the opportunity to field a defence that could then face Arsenal without trepidation on Saturday.

I wrote in August that Conte had a unique opportunity of success as he is taking over a squad with 16 Premier League title winners, but at that point I presumed that Ivanovic would no longer be Chelsea’s right-back as his regression was gathering pace even during the Blues’ finest hour. Sorry Roman, but your mate has got to go.