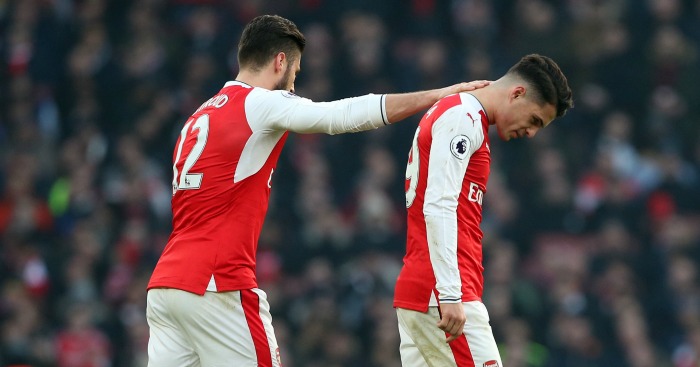 On Sunday, Xhaka was sent off for the ninth time since April 2014. He has been shown more red cards than any other player in Europe’s top five leagues since the start of last season; 12% of Xhaka’s league starts in that time-frame have resulted in a sending-off.

You could argue that his challenge against Burnley, as with the one against Swansea in October, lay in the ‘dark yellow’ category that Arsene Wenger invented after the first game, but that is to entirely miss the point. “Intelligence means you don’t make the same mistake twice, so I hope he learns from that,” Wenger said three months ago. All evidence points to a slow learner.

Xhaka is not a particularly dirty player. Most of his career dismissals have come for two bookings rather than red mist, although this season has seen two straight red cards. Instead, his flaw is a combination of very obvious frustration and an inability to hide the snide. Like Paul Scholes before him, when Xhaka goes in for a tackle you see it coming. Like Scholes, every foul looks like deliberate cynicism rather than mistimed negligence. If there’s one thing that referees don’t like, it is intent.

Arsenal were emphatic winners this week, whatever the controversial nature of their three points. Yet to achieve victory with Xhaka in absentia may well signal long-term problems for a central midfielder who cost £5m more than N’Golo Kante. It’s hard to see his value so far.

Xhaka will now miss four matches: Southampton (a), Watford (h), Chelsea (a), Hull City (h). The Chelsea fixture stands out; it is exactly for this type of fixture that the Swiss was bought. Wenger was answering the demand for a leader in midfield but the truth is that Xhaka is not a leader, at least not yet. Leadership requires discipline, intelligence and responsibility. It is demonstrated in what you don’t do, as well as what you do. Xhaka’s ill-discipline has set the example not to follow.

“Sometimes on the field he has the reaction that is a bit impulsive,” Wenger said after that Swansea red card. “He knows that. He has to work on that and keep control of his reactions in the game.”

This time from Wenger, more anger: “He has to control his game and not punish the team with a lack of control in his tackling. We don’t encourage our midfielders to go down on tackles. We want them to stand up and not make these kind of fouls. If it is a bad tackle, it is a red card.”

A work in progress then, at best. Wenger will be all too aware that Alexis Sanchez (and a questionable offside decision) dug Arsenal out of a hole that Xhaka built. Each dismissal puts doubt in Wenger’s mind when he next comes to picking his team. Wenger is the pragmatic, risk-averse coach; Xhaka is the risk.

The truth is that Xhaka’s talent does not outweigh the negative impacts of his tempestuous tackling. Wenger overlooked Patrick Vieira’s regular red cards and suspensions for accumulated bookings because he was so crucial to Arsenal’s success. Xhaka has not yet earned that status.

By the time the Champions League last-16 tie with Bayern Munich arrives, Xhaka will have missed 27% of Arsenal’s league season through suspension. If you were Wenger, would you rely on him in the AllianzArena?