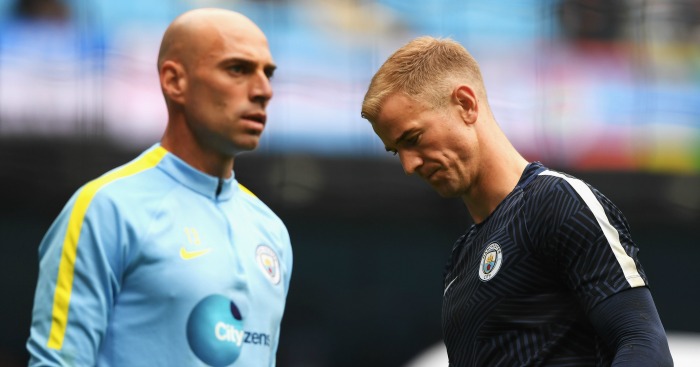 This season, rather than one of us squirrelling away until 1pm and releasing Winners and Losers in a job lot, we will whet your appetite with one loser and one winner, both brought to you by around 10am. If this weekend wasn’t bad enough for Joe Hart, he’s our first loser. What an honour…

Even before Manchester City’s opening game of the season, Joe Hart’s 2016 was turning into a year to forget. For the first time since breaking back into the City team in 2010, Hart had finished outside the top three places in the Premier League. His club’s only trophy had been won with Hart benched for the final, his understudy the penalty shoot-out hero.

And then came Euro 2016, where England’s chest-beating, heart on the sleeve, pashunut goalkeeper failed to provide the aptitude to match his expressive attitude. Hart’s insistence that he had had “nothing to do” in goal looked foolish even before Kolbeinn Sigthorsson’s shot squirmed under his body and England exited the competition in the first knock-out round.

If Hart thought that his Manchester home was where the heart is, Pep Guardiola had different ideas. His difficult year has become his annus horribilis. The Daily Express’ Paul Joyce got the exclusive on Saturday morning that Hart had been dropped for Willy Caballero for City’s first league game of the season, and England’s No. 1 indeed took his unlikely place on the bench.

“I’m pretty sure he’s not happy,” Guardiola said after the game. “All the players who didn’t play, they’re sad, they’re upset. I would not like them to be happy if they would not play. I’m sorry I have to decide, we have 28 players so they have to convince me on the pitch.”

Whether Guardiola truly believes Caballero is a better ‘sweeper-keeper’ or he simply caught most of England’s European Championship campaign is unclear, but what is certain is that Hart now faces a battle for his Manchester City future. Guardiola was not foolish enough to slam the door on last season’s first-choice goalkeeper, but he certainly put it on the latch. Hart cannot be reassured by anything his new manager says on the matter; actions have spoken louder than any words could.

Hart’s biggest concern is that Caballero is hardly Manuel Neuer. The Argentinean struggled with his kicking during pre-season and did so again against Sunderland. Seven of his 25 touches came outside his penalty area – evidence that he is at least trying to change – but he presented Duncan Watmore with the ball during the first half and occasionally looked uncomfortable. Caballero has earned a cult-hero reputation at the Etihad, but the potential for calamity forms at least part of that. Hart’s likely thought: If I’m behind him, then I’m finished here.

That is certainly the view in the media. Reports link Guardiola with moves for Sporting’s Rui Patricio and Barcelona goalkeepers Marc-Andre Ter Stegen and Claudio Bravo, with the latter of those reportedly close to agreeing personal terms. In the space of a week Hart has gone from No. 1 to the back-up to a stop gap. Everton are likely to follow up previous interest.

After the criticism of this summer, Hart at least deserves a word in his defence. He was excellent for long periods last season, regularly saving City during their unprecedented Champions League run. Yet it is impossible to tell the club’s new manager that he is wrong. After City’s recent failure and Guardiola’s reputation for domestic success, Pep has earned the trust of supporters.

“I took that decision,” Guardiola said after the game. “Today, in the world, people are afraid to take the decisions I like to make. But in the end I have a squad and I decide what I see.”

The statement of intent is clear. The old way wasn’t working well enough, so this is Guardiola’s New City Order. No player is too important, no reputation too intact, no first-team player too established to turf out. After years of dominance as Manchester City’s No. 1, Joe Hart is left battling for his future. With an England place on the line, Hart faces a difficult decision on whether to choose fight or flight.