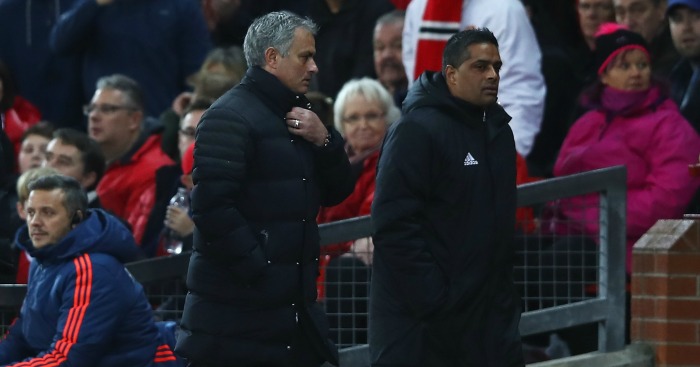 If you make a living from writing about football – whether as match reporter, analyst or columnist – the dreaded scoreline is 1-1. Unless there is a late equaliser, giving you an obvious narrative, the 1-1 is a killer. Try coming up with 16 Conclusions from a 1-1. The good news is that on Sunday, we needed only one: Whatever your allegiances, Manchester United’s season so far has been a disaster and one man has to shoulder the blame.

It has been over 26 years since any Manchester United side has failed to win any of four consecutive league games at Old Trafford. That the manager in charge of that terrible run was Sir Alex Ferguson obviously offers Jose Mourinho some comfort (he hinted as much last week) but it really should not. This is a different era and the size of the club, budget and ego of the manager creates an entirely different circumstance in which this kind of run is unacceptable.

Manchester United – tipped for the title in many quarters, however much people want you to forget that now – are 11 points from the top of the table and eight from a Champions League place. By whatever measure, that is massive underachievement. You may swallow the party line that it will take Mourinho another three transfer windows to transform this side into title winners, but surely nobody believes he needed to spend more than £150m to avoid going backwards?

This is worse than the first days of David Moyes and worse than the first days of Louis van Gaal; statistically, this is the worst United side of the Premier League era. We can talk about dominating possession and we can talk about taking 91 shots to your opponents’ 25 in four frustrating home games but the truth is that against West Ham, there was no point at which you thought ‘it just won’t go in’. It was largely ponderous, largely forgettable football and a much-maligned West Ham defence contained them with relative ease.

Thursday was different and I was genuinely impressed with the intelligent movement and interplay of Paul Pogba, Wayne Rooney, Henrikh Mkhitaryan and Juan Mata. So what did Mourinho do? Drop two of those players to the bench and change the position of another. Of course. The demotion of Mkhitaryan was predictable, but a reinvigorated Rooney motivated by a looming record? To be sidelined for an out-of-form Marcus Rashford and the always-limited Jesse Lingard is a kick in the wine-stained gob.

Mourinho has been so busy briefing lackeys about needing reinforcements that he has seemingly forgottten that his actual job – outside of transfer windows – is to make the United whole greater than the sum of its parts and clear the relatively low bar of a Champions League place.

It surely cannot motivate his players that they are constantly reading and hearing that they are not good enough. In his desperation to make it clear that he does not have the personnel to win the title, has Mourinho ensured that his squad of players fall way below the targets that they undoubtedly are equipped to achieve?

For that, Mourinho deserves a kicking far harder than any drinks bottle.