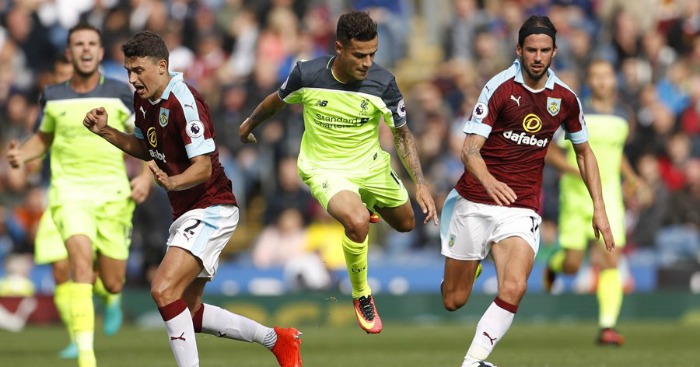 You’d expect Sean Dyche to give the square root of f**k all, but Jurgen Klopp must have been wondering just how his side conspired to lose 2-0 against Burnley on Saturday. Using statistics as a basis for defining your opinion might be a dangerous game, but the away side at Turf Moor had 26 shots to Burnley’s three, 12 corners to one and 80.4% of possession. Since Opta’s data began in 2003, no team has seen more of the ball and lost a Premier League match.

After the match, Jurgen Klopp was in no mood to plead misfortune: “In England you use the word ‘clinical’ – in a lot of situations I saw we were clinical but even then we didn’t score. That’s how it is and we have to accept it. I saw crosses – really good crosses – when nobody was in the box. I saw shots when the whole box was full. Our timing and decision-making today was not really good. It might have been forced by the result and by the passion of the opponent, but it is how it is.”

In terms of the decision-making to which Klopp referred, there is no doubt about the identity of Liverpool’s biggest culprit. Not only did Philippe Coutinho have more shots than any of his teammates, he had as many or more than six Premier League teams this weekend.

There’s nothing wrong with recording a high number of shots, of course, but that largely depends on three things: 1) Accuracy, 2) conversion rate and 3) area from which shots are taken. The three factors are evidently interdependent, but by all three criteria, Coutinho often falls short.

All eight of Coutinho’s shots against Burnley were from outside the area, and only one was on target. Too often the Brazilian got into promising areas and had support from Daniel Sturridge or Roberto Firmino, but turned down their assistance in order to try his luck. This is becoming a broken record.

Since the beginning of 2014/15, only four Premier League players have taken more shots than Coutinho – Sergio Aguero, Harry Kane, Alexis Sanchez and Romelu Lukaku. Adjust this for the number of minutes played, and only Kane in that list appears ahead of the Brazilian. Now, let’s rank those five players by shots on target: Kane – 122, Aguero – 114, Lukaku – 90, Sanchez – 87, Coutinho – 64. Despite ranking fifth for shots taken, Coutinho ranks ninth for shots on target.

Coutinho’s issue is that his shots are taken from speculative areas, broadly speaking. While Kane, Aguero, Lukaku and Sanchez all took between 21% and 37% of their shots from outside the area, Coutinho was as high as 63.6%. Only three players have taken more than 100 shots from outside the area in the last two seasons: Yaya Toure (101), Christian Eriksen (137) and Coutinho (136). Eriksen’s one extra shot is the result of more than 1,200 more minutes on the pitch. In terms of shots per 90 minutes from distance over an extended time period, nobody in the Premier League rivals Coutinho.

The knock-on effect of this is predictable. Of the 42 players to have attempted 100 or more shots since the beginning of 2014/15, only three (Santi Cazorla, Craig Gardner and Jonjo Shelvey) have a worse conversion rate than Coutinho. If you hear Liverpool fans groaning when another shot is fired off target, you know why.

The frustrating element of this is that Coutinho clearly has the potential to limit this tendency, as his performance against Arsenal last Sunday shows. When you can pass and create chances as well as him, why would you fritter away opportunities by shooting?

Until he makes that the exception rather than the rule, the Brazilian’s decision-making will regularly harm Liverpool’s attack as much as his creativity and invention aids it. On his off days, Coutinho is the king of speculation. And you can’t build a story around speculation.