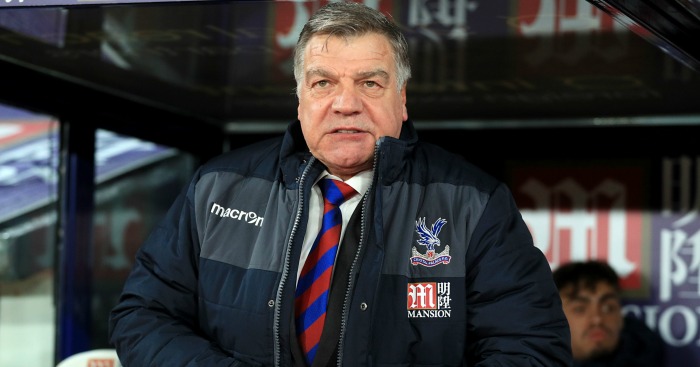 “It becomes ever more a struggle as one more game ticks by so we’ve got to all get digging in. We’ve got to be that bit more resilient” – Sam Allardyce.

It was interesting that Allardyce used the phrase “digging in” after defeat at the London Stadium. It mirrored the words used by Phil Thompson in predicting doom for already half-borked Hull City last weekend. When Thompson accused Marco Silva of an inability to “dig in”, it was Allardyce’s grimace that he had in mind.

You know what you get with Allardyce, or so the theory goes. He is football’s emergency service, called up in times of desperation and drought. Defenders will be made more resolute, central midfielders will be steeled, results will be turned and relegation avoided.

Those characteristics typically make Allardyce a welcome addition to any struggling Premier League team, with Sunderland the latest to offer their thanks after Great Escape. Never mind that Gus Poyet, Dick Advocaat and Paolo Di Canio had achieved the same feat. Never mind that Sunderland only took ten points from Allardyce’s first 12 league games, and failed to move up a single position in that time. For what we are about to receive, may the Lord make us truly grateful.

Except that not every Crystal Palace supporter was pleased to see Allardyce arrive at Selhurst Park. He is a manager who demands total control over transfers and has an uncomfortable attitude to promoting young academy players. Palace are already close to deals for Carl Jenkinson and have signed Jeffrey Schlupp from Leicester. Patrick van Aanholt, Jermain Defoe and Patrice Evra are other reported targets. Plenty of fans still have blisters after having their fingers burnt by Tony Pulis’ winning-at-any-cost tenure, so why would Pulis Mk II be different.

That’s not to mention the lingering unease of Allardyce’s England exit, plus the insinuation that the manager is only in charge because the offer came, rather than through any affinity with Palace or deep-seated desire to take the club forward. ‘Corruption not welcome’ read the banner at the end of Allardyce’s home debut. Disquiet will only be quelled by evidence that Allardyce can turn around Palace’s wretched form: Their last 40 league matches have returned 27 points and included runs of five and six straight defeats.

If this is far from the perfect marriage, you can forget the honeymoon. After drawing at Watford in Allardyce’s first game in charge, Palace produced their worst display of the season against Swansea at home before drawing 0-0 at Bolton. Their performance against West Ham was appalling too; they were soundly beaten by a club supposedly in crisis. Palace had one shot on target in 90 minutes; the last time West Ham restricted a team to that number was December 5, 2015. The only marked difference since Allardyce’s appointment is the fewer number of goals scored.

This is not an issue of aptitude, but attitude. Man for man, a squad containing Christian Benteke, Yohan Cabaye, Wilfried Zaha, James McArthur, Steve Mandanda and Andros Townsend has as much ability as West Brom, Bournemouth and Burnley, all of whom are at least nine points ahead of Palace, sponsored by MansionCasino. The accusation from supporters is that too many first-team players are guilty of a distinct lack of effort.

Allardyce himself has already lined up a number of excuses including the packed fixture schedule, refereeing decisions and Harry the Hornet, but after the West Ham defeat launched into an attack on the squad, including references to “basic errors” and “failing players”. After one point from four league games, and two weeks of the transfer window remaining, the time for niceties is over.

This is not to say that Allardyce’s job is under pressure. He has earned the right to patience anyway, but the debilitating effects of Alan Pardew’s last months have sucked all belief from Palace’s staff. Allardyce’s reputation is as a man who revels, not crumbles, in adversity. For all the talent in Palace’s squad, this may be his toughest assignment yet.