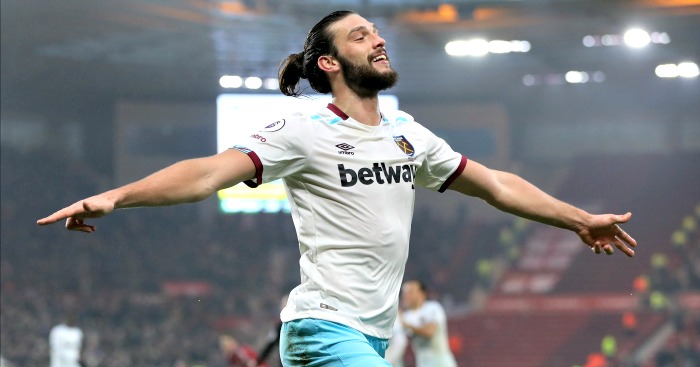 It could only ever happen to him. When Slaven Bilic confirmed that Andy Carroll was a doubt to face Middlesbrough earlier in the week, it felt apt. This was the striker’s career in a microcosm: the sublime followed by the setback. He had suffered suspected whiplash as a result of his spectacular overhead kick against Crystal Palace in the previous fixture. For a player whose very footballing existence has been a rollercoaster, it was a fitting setback.

As it happened, the West Ham manager needn’t have worried. Carroll started against Middlesbrough, scoring one exquisite header and one poacher’s goal in a crucial 3-1 victory. Unless Burnley secure a shock win over Arsenal on Sunday, this will be only the second time this season in which the Hammers finish a gameweek in the top half.

Carroll will only hope that his latest injury, a ‘slight’ groin problem which forced his substitution on 67 minutes, does not derail his momentum. For over an hour against Middlesbrough he was the difference, the focal point this side have been in desperate need of. Although that should not detract from his defensive prowess – only Winston Reid and Angelo Ogbonna made more clearances in the win at the Riverside.

Payet who?! Playing with a proper back four and shape seems much more impactful than indulging a luxury forward. Who'd have thunk it?

The 28-year-old spent most of the summer trying to persuade West Ham of his importance. The club outlined their intentions to “bring a top striker in”, in the words of co-owner David Sullivan. Carlos Bacca stood them up; Alexandre Lacazette did not want to leave his current relationship; Michy Batshuayi felt he could do much better. And all the while, West Ham viewed Carroll only as someone to confide in, to complain that all strikers are the same. Carroll offered a shoulder to cry on, knowing that he could be perfect for them; West Ham gave him a hug as they wondered why they could never meet a man like him. Like him, but not him.

The search conducted by Davids Gold and Sullivan for that elite striker is no secret. The club have signed 32 forwards since their takeover in 2010, and they have scored a combined 128 goals in 644 games. Carroll accounts for 28 of those – the most of any player. To say that the only question mark against his record is his fitness is misleading, because it is such a massive question mark.

But it cannot be denied that West Ham look so much better with his inclusion. He has now started six Premier League games this season, with Slaven Bilic’s side winning four and losing two of those. He has missed three months to injury, yet only Michail Antonio has scored more goals for the Hammers this season.

His club might not be the only ones to benefit if he were to achieve consistent levels of fitness. Carroll is still viewed as a figure of ridicule by an albeit increasingly dwindling minority, but Gareth Southgate will be watching his progress with a keen eye. The new England manager’s latest squad contained six strikers: Theo Walcott, Daniel Sturridge, Marcus Rashford, Jamie Vardy, Harry Kane, Wayne Rooney. None offer what Carroll does. An international starter he is not, but there are few more proven and potent Plan Bs.

In the space of seven days, Carroll has inspired his club to two crucial victories with three goals. Only in his case must that be taken with a whole vat of salt. But West Ham’s owners should know by now not to overlook him; he might be their perfect man.