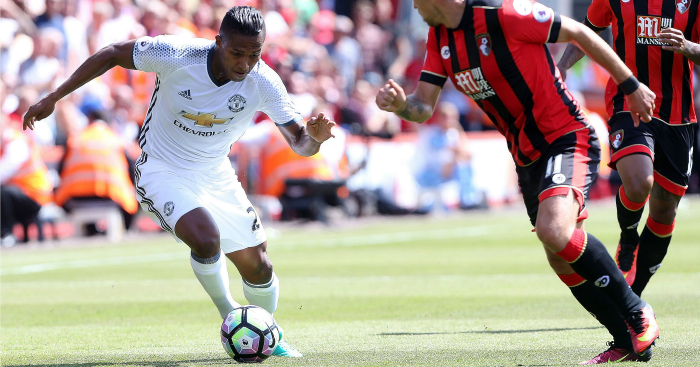 This season, rather than one of us squirrelling away until 1pm and releasing Winners and Losers in a job lot, we will whet your appetite with one loser and one winner, both brought to you by around 10am. Joe Hart was your loser, so here is your winner…

It is likely that 2016/17 is Antonio Valencia’s last campaign as a Manchester United player. Now 31, Valencia signed a three-year deal in June 2014 with an option for it to be extended by an extra season. There are many who would consider him fortunate to still be on United’s books, having produced more off than on over the last five years.

For so long, Valencia’s presence at right-back has been a cause of intense frustration for supporters. In the David Moyes era, his substitution into matches was a sign that their unadventurous manager was happy with his lot. More often than not, it also became a precursor to United conceding.

Under Louis van Gaal, Valencia’s reputation hardly improved. The defensive uncertainty remained – particularly being caught out of position – while the Ecuadorian also lost his attacking powers. This became most obvious through Valencia’s crossing, which stuck to the same method: Run forward with hesitation, don’t look up, hit the first man. Valencia’s full-back performance was as a jack of two trades, but master of neither. As an added bonus, he is impressively one-footed.

‘Fosu-Mensah and Darmian must be United’s right-sided options moving forward before Eric Bailly and Ashley Young are mentioned as emergency options – both have shown more quality in the position at the club,’ a piece read on a prominent Manchester United blog earlier this month. ‘Valencia lacks the technical ability, football intelligence and his physical quality is beginning to decline.’ Apart from that, though…

Yet if that contract option depends on Valencia’s own form during Jose Mourinho’s first season in charge, signs are initially promising. Out of nowhere, United have an Antonio Valencia in full working order, put through service and MOT and then the car wash for good measure. Fans in the away end must have gulped when they saw Matteo Darmian left on the bench, but Valencia more than merited Mourinho’s faith.

Not only was Valencia solid in defence, ably dealing with the threat provided by last season’s top scorer Josh King, but he was an outlet for United on the right wing, Juan Mata tucking inside to allow Valencia to overlap.

Most of all, Valencia has learnt how to cross, like an amateur golfer who suddenly starts creaming the ball down the middle of the fairway and keeps looking at his hands in bemusement. His three assists against Galatasaray in pre-season were followed by him setting up Zlatan Ibrahimovic’s Community Shield winner. It was Valencia’s cross on Sunday that found Anthony Martial in the build-up to Wayne Rooney’s header. He is a changed man.

There was an interesting point made by Mourinho after the Community Shield regarding Valencia’s mindset under Van Gaal: “There are some changes and that takes time. The second goal, probably last year Valencia, instead of crossing, Valencia gets down the line and plays a back pass. So we are changing the principles of play and that takes time. So in this moment, we are not a super team, we are just a team with a super desire to work.”

A slight dig at his predecessor perhaps, but also an important detail. By instilling Valencia with the licence to attack his man, the full-back immediately looks more confident. With confidence comes achievement. Suddenly, Valencia looks a new player. Being picked to start on the opening day for the first time in three seasons will only increase his belief.

With pace, strength and stamina all in abundance despite his ageing years, it isn’t difficult to see why Mourinho might prefer Valencia to the still wispy Darmian; these are the first three characteristics of any Mourinho favourite. Valencia still has plenty to do to convince supporters that he is a viable candidate for Manchester United’s right-back role – particularly against stronger opposition – but the first audition could hardly have gone better. No fluffed lines, and no fluffed crosses either.