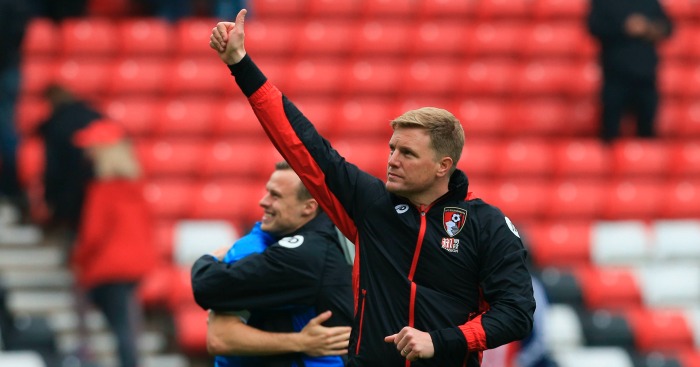 At the end of February, after Bournemouth had lost their fourth straight Premier League game and were just four points clear of relegation with Crystal Palace, Swansea and Hull all improving, Eddie Howe was our early loser. The man with the safest job in the top flight was sliding towards a relegation battle and appeared to have little to no idea how to stop the rot. But there is nothing quite like a defeat to West Brom with 68% possession to engender a change of approach.

At the end of April, Bournemouth are in tenth. They have 41 points. And despite Howe’s protestations and insistence on using a calculator, they can plan for a third season in the Premier League. A four-point gap to relegation has become a ten-point gap in the course of nine games which have reaped an impressive 15 points. As it took 18 games to amass their last 15 points, we can conclude with only half a tongue in cheek that Howe has made Bournemouth twice as good in the last two months.

It has helped that Simon Francis has returned to solidify a crumbling defence but Howe has made his own brave and decisive changes to encourage a return to wing play, giving Bournemouth a counter-attacking threat rather than always seeking to control possession of the ball. Wingers need targets and Howe has brought back Benik Afobe, who – by his own admission – had lost focus until Howe dragged him back on track.

Afobe and Josh King have started all nine Premier League games of this hallelujah run and the statistics are stark: Bournemouth have won 45% of their games this season with their strike pair in tandem and just 26% without. It may not be Howe’s philosophy to play with less possession but more goal threat, and dropping Jack Wilshere must have tugged somewhere at his conscience, but the best managers can turn around poor form of their own making. Howe joins Antonio Conte and Ronald Koeman in managing that feat this season.

There are still question marks over Howe’s prowess in the transfer market, and it is telling that seven of their ten outfield players at Sunderland on Saturday were Bournemouth players in the Championship or below, but those are questions for another day. At the business end of the pitch, Howe has got it right with Afobe and King, who has been a phenomenal free transfer. Howe probably did not envisage too many away games in the Premier League with two strikers but in embracing that change, he has proved himself to be capable of pragmatism. Not for him a sleepwalk into a relegation battle while being lauded for playing football ‘the right way’.

“At times you might lose the element of control that you want, but you are adding a goal threat and maybe a counter-attacking threat that you didn’t have before,” said Howe last month. Since the beginning of March, only Tottenham, Everton, Leicester and Liverpool have scored more goals than the resurgent Cherries. This Plan B is for Bournemouth being in the Premier League once again.