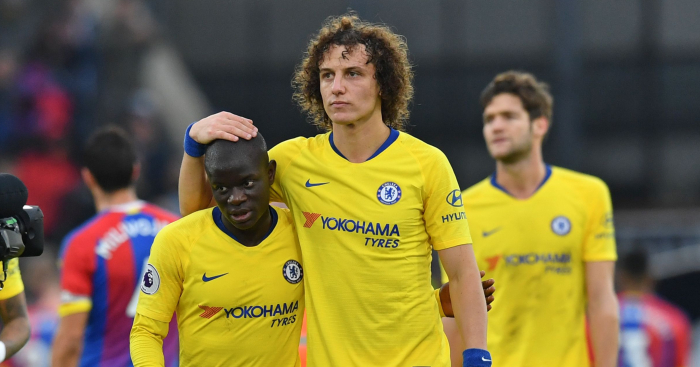 The truth is that he made that run four or five times before it was found with a defence-splitting pass from David Luiz, who was emboldened by Crystal Palace’s lack of ambition to edge far enough into the home side’s half to showcase his underrated vision and execution. Kante may not be a natural finisher but he is a natural thinker and a natural runner; he knew if he made that run a fifth or sixth time that he would eventually be found.

Far too much – and we include ourselves here – has been written and said about Kante’s change of position this season to accommodate Jorginho. He’s not been moved to left-back or into a false 9 position; he is just operating slightly further forward with a licence to make runs behind the defence. And the exact same qualities that saw him thrive in a deeper role have seen him more than survive the switch. He is a fixture in Maurizio Sarri’s side precisely because he is the same persistent, intelligent and technical footballer who has won two Premier League titles.

‘Who will pick up the slack if opponents shackle him?’ asked the Daily Mail’s Martin Samuel of Eden Hazard in October. ‘Chelsea’s front six are mainly link men, toilers, pivots and passers.’ The word Samuel missed out of his miserable dismissal of this Chelsea side is ‘excellent’. For an excellent toiler or pivot is surely a bigger asset to a possession-hungry Premier League side than a poor striker. Hazard may be alone in offering pure magic but on days when he is kept quiet, footballers like Kante and Ross Barkley are schooled not just in recycling possession but also in making the kind of runs that can turn that possession into penetration in an instant.

It does not make for scintillating entertainment – and Palace were in no mood to provide a stage anyway – but it did get Chelsea over the line for a third successive away victory, taking them five points clear of fifth and a step closer to their realistic target for the season. Kante’s strike was his third of the season and the Frenchman is now the sixth Blues player to reach that total in the Premier League. Three of those six are central midfielders; Liverpool cannot match that kind of output from that area of the pitch. In truth, they don’t need to.

Chelsea clearly do need reinforcements in offensive areas; all Sarri’s summer spending came on their spine and he may well do the same again in January as they are being strongly linked with Mats Hummels. They may have to wait for players who can truly take the goalscoring burden from the shoulders of the slaloming Hazard, but for now they do have a plan that creates unlikely match-winners. But should we really be surprised when one of those match-winners is a World Cup winner and former Player of the Year? Great footballers adapt.