Jurgen Klopp straddled that fine line between genius and insanity on Saturday. Only barely, but still... 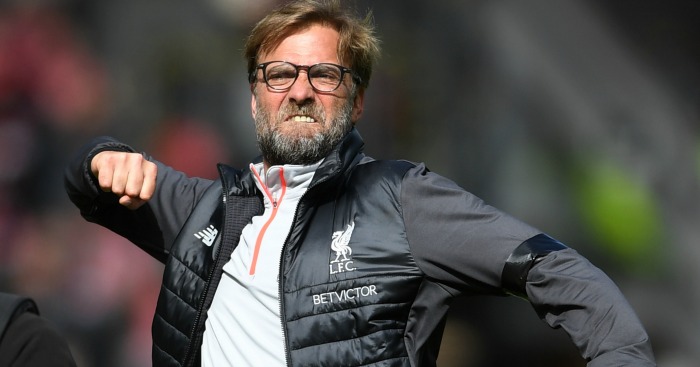 There is a fine line between genius and insanity. For over an hour at the Britannia Stadium, there was little doubt as to which category Jurgen Klopp fell under. With Liverpool in the driving seat for Champions League qualification, he seemed to let his hands slip from the wheel.

“I really like our line-up for today. I’m excited,” the manager remarked with not a hint of irony before kick-off against Stoke on Saturday. He had made four changes from the disappointing draw against Bournemouth: three in terms of personnel, one in terms of the system.

Many felt the switch to a three-man central defence against Bournemouth cost Liverpool in midweek, but clearly not the manager. Klopp expressed a desire for his side to emulate Chelsea in midweek; replicating the system which has propelled the Blues towards another Premier League title seemed a step too far.

When Jon Walters headed Stoke into a 1-0 first-half lead, it truly did seem as though Klopp had gambled everything on red, only to see the ball fall on black. Trent Alexander-Arnold and Ben Woodburn were handed starts in an experimental starting line-up which produced a listless, uninspired first 45 minutes.

At that stage, Liverpool were falling over their own laces in the race to finish in the top four. They were sleepwalking into the Europa League. Manchester City were cruising against Hull, and they ended the afternoon with a comfortable win. Defeat to Stoke would leave the Reds six points ahead of Arsenal and Manchester United, but with both sides having played three games fewer.

Klopp’s first roll of the die produced a double one. But the flipside to naming an inexperienced starting XI was that Liverpool have rarely boasted a stronger bench. Alexander-Arnold and Woodburn were unfortunate to be sacrificed – neither were even close to the worst player for the away side – but this rescue mission called for the talents of the club’s Brazilian duo.

Klopp explained his decision not to start Roberto Firmino by stating that the forward was “overplayed”. Philippe Coutinho’s was an obvious omission, the 24-year-old having struggled recently with illness. Bringing them both on at half-time felt like an admission from the manager that he had got it wrong; at least he was actively trying to put it right.

Liverpool improved in the second half, but it was not until Klopp’s final gamble that the tide turned. Sturridge was left on the bench against Bournemouth, an unpopular decision with the supporters. The manager claimed he was not ready for such an “intense” match. And yet, when the striker was introduced, he completely altered the complexity of this one. He played a crucial role in the build-up to Coutinho’s equaliser two minutes after he came on, and Firmino would complete the comeback just over a minute later. The triple substitution had paid off.

Klopp’s hands were back on the wheel by 5pm, but only barely. In mitigation, his starting line-up was borne of a succession of injuries that have threatened to derail their season numerous times. An XI of Liverpool players who have played the most minutes this season – (Mignolet; Clyne, Matip, Lovren, Milner; Henderson, Can, Wijnaldum; Lallana, Mane, Firmino) – has never started a game together. This was the 37th unique starting line-up in 41 games this season.

That indicates a need to strengthen in the summer, one that cannot be overlooked as it was this winter. But as for Saturday, this was one step closer to completing the season’s objective. Klopp himself will admit that he perhaps looked insane at one stage of the afternoon, but he ended it looking like a genius.