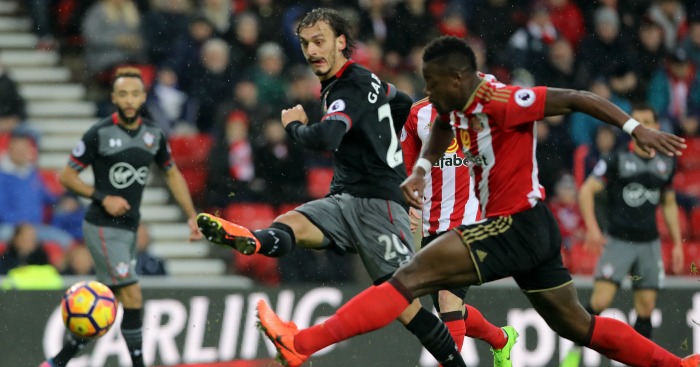 Some clubs’ struggles can be confusing to those on the outside looking in, but others are a great deal more transparent. Ask any Southampton supporter to diagnose the Saints’ problem during the first half of the season, and every one would give you the same answer: Goals. Southampton scored 23 in their first 23 league games.

In fact, most supporters would have given you the same answer last July if asked to predict in which area their team would be found lacking. Having ranked joint-seventh for goals scored in the Premier League in 2015/16, Southampton sold the two players who scored the most, the two players who had the most shots on target and the two players who ranked second and third for assists for the club last season. Sadio Mane and Graziano Pelle may have raised £42m in transfer fees, but their departure left a cavernous hole in Southampton’s attack.

The arrival of Nathan Redmond from Norwich City only added a sticking plaster to a gaping wound when a thick bandage was required. Puel has put faith in the form and fitness of Jay Rodriguez, Charlie Austin and Shane Long, but only through the lack of alternative option. You would need to attach all three together to create a fully-functioning first-choice striker for a team with aspirations of matching last season’s top-six finish.

Last season, Southampton’s shot conversion rate was 14.8%. This season, with Mane and Pelle gone, it had dropped to 9.21% by the end of January. Puel had been asked to paint a masterpiece with wax crayons and three old felt-tip pens.

There aren’t many situations that can’t be improved by the introduction of a six-foot handsome Italian, and the arrival of Manolo Gabbiadini may just have saved a meandering, drifting Southampton season. Costing only £17m from Napoli – we really do have to say ‘only’ when discussing a fee under £20m for an international striker now – Gabbiadini’s career was in danger of waning after the promise he showed at Sampdoria. He had scored regularly in Europe for Napoli, but had started only 19 Serie A matches in two-and-a-half years in Naples.

“I am very, very happy,” said the Italian after signing. “Since I was a kid, one of my dreams was to perform in one of the biggest leagues in the world, so now that it’s happening I can’t wait to start playing. The facilities that I have seen here are at an incredible level – top-level standards even for Serie A. These are the sort of facilities that make you want to come here and perform as soon as possible.”

If Gabbiadini said all the right things after arriving in England on the final day of the transfer window, his earliest actions in a Southampton shirt have drowned out all words. His first two Premier League games have produced 11 shots and three goals; that’s 3% of Southampton’s league shots and 11% of their goals for the season from one player in his first 163 minutes.

Gabbiadini will be fortunate to find any defences quite as accommodating as David Moyes’ shambolic band of aren’ts, aren’t-any-mores and probably-never-will-bes, but Gabbiadini is a player who ticks most of the boxes for a lone striker in the Premier League. He met Ryan Bertrand’s cross for the opening goal and then profited from abysmally weak marking in the box to turn and score a second just before half-time. It is a tiny sample size, but the signs are promising.

Should Gabbiadini continue to flourish, Claude Puel would be forgiven for having bittersweet memories of his first season in England. It’s difficult not to wonder how much higher up the table and deeper into the Europa League their new striker could have taken them across a whole season. Southampton’s strategy of selling their most valuable assets for what they consider above a reasonable price only works if they re-invest the proceeds wisely and quickly.