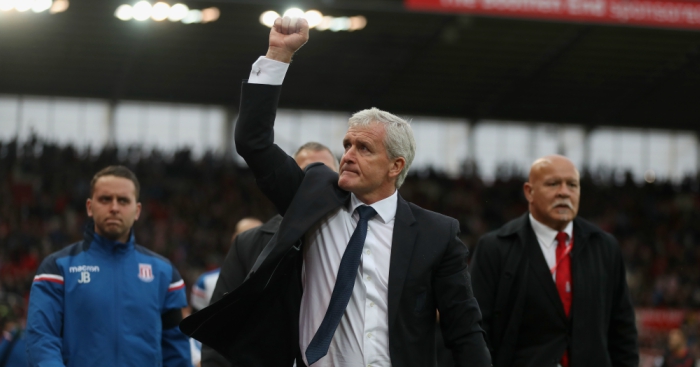 The incredulity in the voice of the commentators was impossible to ignore. “It’s incredible that the pressure is on after one difficult away game at Everton,” noted Steve McManaman within the first minute at the Bet365 Stadium. “For Mark Hughes to lose 1-0 there is not a terrible thing.”

McManaman continued, failing to stifle his disbelieving laughter: “But that’s the life of a Premier League manager – they’re under pressure after one game.”

Darren Fletcher, who would watch his namesake manfully monitor Stoke’s defence for the subsequent 90 minutes, joined the BT Sport pundit in wondering just how, in this nascent season, Hughes was already facing questions concerning his tenure and a perceived lack of investment this summer.

But to claim that this was an example of the sort of reactionary thinking that has cost many a Premier League manager their job is wilful ignorance. Hughes was not under pressure because Stoke lost 1-0 to Everton on the opening day; he was under pressure because they finished 13th last season, and because they had lost each of their last 18 league fixtures against last season’s top six – a run dating back to December 2015.

Until Saturday. A hard-fought victory against an arch rival was a timely confidence boost, a shot in the arm for a tenure that was threatening to fizzle out after four years and little tangible progress.

Hughes admitted after the game that he was “fed up” of the criticism he had shouldered, and the Welshman hoped that a win over Arsenal “will change people’s thinking”.

He cannot have it both ways, of course. If he and his supporters are to pretend that discontent only emerged as a direct consequence of one negative result, it is outlandish and hypocritical to expect the wider opinion change because of one positive one. The victory over Arsenal was one small step on a longer journey.

But what a step. Arsene Wenger’s frustration after the game was palpable, and perhaps even understandable. Arsenal had at least one appeal for a penalty rejected, while pubs and bars up and down the country were rife with arguments as to whether Alexandre Lacazette really was offside. And he really was, even if linesman Simon Beck relied on more than a touch of fortune with his call.

Yet that should not – and will not – bother Stoke. The Potters were organised, industrious and purposeful, and Hughes’ team selection brave. He matched Arsenal’s three-man defence with one of his own; four forwards were in the starting line-up; four more were on the bench.

Hughes was courageous too in his substitutions. Xherdan Shaqiri was removed due to injury after just 25 minutes, and the decision to bring on Saido Berahino instead of Bojan was met with confusion. Berahino’s part in the winning goal was all the justification needed.

The trick was repeated in the 70th minute, with Stoke defending a one-goal lead. Jese Rodriguez, scorer of a debut goal at the start of the second half, was taken off to a resounding applause. The temptation would be to bring on a defender and hold out for all three points; Ramadan Sobhi was introduced, and the pacey Egyptian proved his worth.

From team selection to substitutions, Hughes completed a hat-trick of managerial success with the performances of his two best players; Kurt Zouma was a rock at the back, and Jese provided a goalscoring threat the club has lacked for years. The manager will revel in the fact that both arrived this summer in a transfer window many held as an example of Stoke’s stagnation.

Hughes should not expect the pressure to immediately dissipate. A trip to Tony Pulis’ West Brom at the start of the season is as difficult a fixture as any, while Manchester United and Chelsea are their next home opponents. But the Potters’ first victory last season came in October against Sunderland. A win over Arsenal under the August sun is undeniable progress.