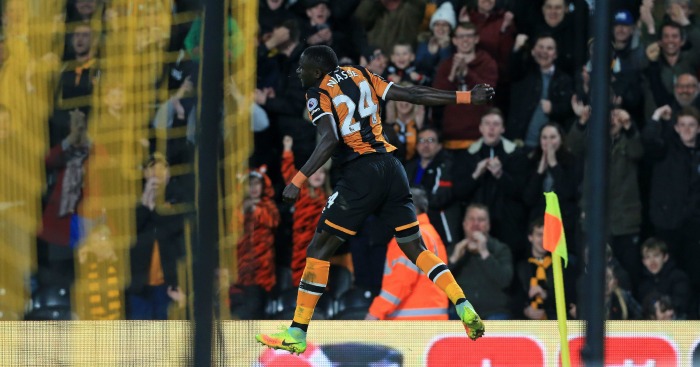 ‘Oumar Niasse only got a game with Everton’s kids and wasn’t allowed a locker by Ronald Koeman… so, why do Hull think he can help keep them up?’ was the sniffy MailOnline headline after Marco Silva had made Oumar Niasse one of his eight January signings. The Mail were not alone; we all sniffed more than a middle-aged rocker on one last tour.

And yet here we are now with Niasse having scored four Premier League goals as Hull have put up their gloves and fought the unexpectedly resilient fight against relegation. A foreign manager who ‘didn’t know the league’ and a collection of Championship players studded with cast-offs from across Europe have dragged the Tigers to the brink of survival. None was cast further aside than Niasse, restricted to playing with Everton’s kids and treated with utter disdain by Ronald Koeman.

So why did Hull think Niasse could keep them up? Perhaps because a manager with extensive knowledge of European football remembered his 19 goals in 42 games in Russia? Perhaps because scouts watching Under-23 games saw a sharp finisher score seven goals in five games despite having his confidence shattered by 12 months in England in which he had become a laughing stock? Perhaps because somebody at a professional football club knew rather more than me, you or some bloke at MailOnline.

When Niasse combined with his strike partner Abel Hernandez to score Hull’s sumptuous second of the night against Middlesbrough, he had scored with all four of his four shots on target at home for the Tigers in the Premier League. He may have lacked the mobility and hold-up play to make him a viable lone striker for a club with top-half ambitions, but his finishing is instinctive and impossible not to admire.

Should Everton have spent £13.5m on Niasse? Most definitely not. Should Niasse have been written off on the basis of five or ten lumbering minutes for Everton? Absolutely not. The truth – as ever – lies somewhere in between and Niasse is a thoroughbred horse for the particular course being navigated by Marco Silva. What price a goalscorer at the bottom of the Premier League? Jermain Defoe has a massive media fan club but he has scored fewer Premier League goals than Niasse since he was given a locker at Hull.

His pass completion rate may slip too easily towards 50%, he may constantly lose the ball through his oft-amateurish first touch, but Hull fans do not care a jot; his finishing is one of the reasons why they are not just dreaming but are now deserving of survival.

There is little more fascinating or cockle-warming than a seemingly nonsensical signing becoming a genius move. Sometimes it feels very satisfying indeed to eat humble pie and admit that Hull were inspired in their belief that a joke of a footballer could help them have the last laugh.