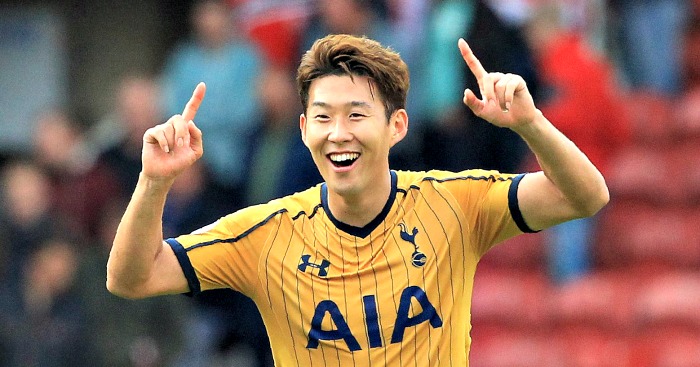 “I wanted to ask him to play more. This is true, every player wants to play games. The gaffer gave me a chance and I am very grateful to him, he has given me this chance to play.”

It was all Heung-min Son ever wanted to do – play more. When Tottenham signed the South Korean for £22million from Bayer Leverkusen last summer, it was expected that he would be a regular fixture in the first team. What followed was just 13 Premier League starts, an understandable struggle to acclimatise to a new country, and an underwhelming debut campaign in English football.

No wonder he asked to leave in the summer. Son and Mauricio Pochettino have been rather candid about the versatile forward’s wish to depart White Hart Lane after just one season, hoping to consign an ignominious year to the history books, and continue with what still promised to be a stellar career. Some things just don’t work out, even if both parties are willing.

Credit to Pochettino for his belligerence, refusing to give up on the 25-year-old. And credit to Son for taking the subsequent opportunity with both hands, as well as a wonderful right foot and a gleeful smile. His double on Saturday brings his tally for the season to four Premier League goals in three games. He scored as many in 28 matches last season.

In the absence of Harry Kane, it was expected to be Vincent Janssen who shouldered the goalscoring burden. Instead, the Dutchman was the provider for Son’s first, laying the ball into his path before the winger fired past Victor Valdes.

That goal was a collective effort; Son’s second was a moment of individual brilliance. He bent a delightful strike around the keeper from an acute angle on the edge of the area, doubling his side’s lead.

Without Son, it was difficult to see where Tottenham would find the breakthrough against Middlesbrough. As they did against Sunderland, they dominated the game in its entirety, but stumbled at the final hurdle. The 25-year-old dragged them over the finish line, with no player having more shots (four) or more shots on target (two), while he completed nine dribbles – seven more than any of his teammates.

It was not as if Son shied away from possession, either. He completed 90.2% of his passes, and had 79 touches – only Christian Eriksen (86) had more. This was yet another accomplished performance from an ever-improving player.

“The expectation on him, when you arrive in a new country, with a different style of football. He struggled to settle, but he’s working very hard,” said Pochettino after a victory which lifted Tottenham into second, and there is no doubt as to their star player so far. Son is rising, and the hard work is paying off.